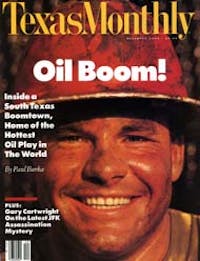 Time plays tricks, doesn’t it? What looked like gold-plated truth in the exuberance of youth appears cheap and tawdry in the unforgiving light of experience. In 1975 I wrote a story for Texas Monthly in which I concluded that Jack Ruby acted alone, that one lone nut killed another. I don’t believe that anymore.

My friend Bud Shrake, who shared an apartment with me on Cole Avenue in 1963, recently refreshed my memory. Ruby and other characters from the Carousel Club, including an unforgettable stripper named Jada, hung around our apartment. After the assassination Jada told us Ruby once introduced her to Lee Oswald at the Carousel. While they were having drinks, Beverly Oliver, a singer from the Colony Club next door, stopped by and was also introduced. For some reason, I chose to forget Jada’s story when I wrote about Ruby in 1975. Jada is dead now, but I phoned Beverly not long ago and asked if she remembered. “Sure do,” she said. Ruby introduced him as ‘my friend Lee from the CIA.’”

Investigating the Roscoe White story illuminated some dark and unexplored corners and reminded me how astonishingly innocent we were 27 years ago. We didn’t dream that our friend Jada was a drug courier for the mob or that Ruby was anything more than a violence-prone punk. Now it appears that the Mafia singled out Ruby for special assignments, like carrying bribe money to Cuba to bail Santos Trafficante out of jail. Trafficante was a key figure in the CIA-Mafia plots to assassinate Castro. Who could have guessed that the CIA was in bed with the Mafia? The House Select Committee on Assassinations concluded that evidence of organized crime played a part in killing Kennedy and that Ruby—whatever else may be inferred from his activities—was at least available if the mob needed him to eliminate Oswald.

Looking again at the evidence, I’m convinced that the fatal head shot came from the direction of the grassy knoll. More than two dozen doctors and nurses who worked on the president at Parkland Hospital remember that the back of the president’s head was blown away. That sounds like an exit wound, not an entrance wound. In the Zapruder film you can see clearly a shot striking the right front of the president’s head and driving him back. Motorcycle cops, Secret Service agents, even Jacqueline Kennedy were positive about the rear head wound. One of the most haunting images was of Mrs. Kennedy climbing onto the trunk of the limousine to retrieve parts of her husband’s skull and brains, which she tried to push back into place.

The Warren Commission and later the HSCA decided that the eyewitnesses were mistaken, because their recollections conflicted with the official autopsy photographs and x-rays. What neither of these investigative bodies told us was that the official photographs also conflicted with each other. X-rays show the whole right side of the president’s face—including the eye socket—blasted away, but in autopsy photographs the president’s face is unmarked. Nobody has ever explained this amazing contradiction, though G. Robert Blakey, the counsel for the HSCA, tried. “Damage could have been done to the skull without ripping the face off,” Blakey reassured me.

Two years ago, on the twenty-fifth anniversary of Kennedy’s murder, Dr. Robert McClelland and two other doctors who worked on the president at Parkland were permitted to examine this evidence for the first time at the National Archives, where it has been locked away from a prying public. What they saw left them incredulous. In testimony before the Warren Commission all three had described a massive hole in the back of the president’s head—one of McClelland’s most vivid memories was of looking into Kennedy’s skull cavity—and now, a quarter of a century later, official photographs showed the back of the head so pristine that the president might have been in a barber chair waiting for a trim. McClelland, a professor of surgery at Southwestern Medical Center in Dallas, said, “I don’t understand it, unless there has been some attempt to cover up the nature of the wounds.” Blakey also had an explanation for this. “The doctors are just wrong, that’s all,” he said.

From the start of the Kennedy administration, the Kennedy brothers went out of their way to tweak the noses of the dangerous and powerful. Robert Kennedy’s crusade against the mob—and particularly against New Orleans’ crime boss Carlos Marcello—was as mean and vindictive as anything in memory. The attorney general had Marcello illegally deported to Central America, where he was unceremoniously dumped on a mountainside. Marcello emerged in a murderous rage. After the Bay of Pigs, the Kennedys personally emasculated the top echelon of the CIA, including director Allen Dulles, who ended up on the Warren Commission. John Kennedy then proceeded to sign off on some of the nastiest and most far-fetched intelligence schemes ever hatched. Robert Kennedy insulted and browbeat agents relentlessly. Years of doublecrosses and reincriminations left many old-line operatives bitter and aching for revenge.

We couldn’t see it at the time, but we were dangling like puppets in a crosscurrent of violence—renegade intelligence operatives, mobsters, mercenaries, fanatical Cuban exiles, and a cabal of military and industrial moguls—what Colonel Fletcher Prouty, the liaison between the Pentagon and the CIA, called the Secret Team. In this milieu, distinctions between morality and duty blurred, and murder became the coin of the realm. I don’t know what happened back in November 1963, but you’ll have to sell the lone-nut theory somewhere else.