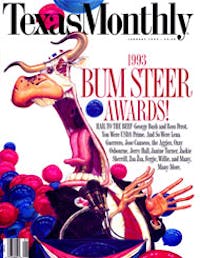 Mark Seliger is the kind of guy who never met a stranger—a quality that comes in handy, since the folks he has met happen to have names like Robin Williams, George Harrison, and president-elect Bill Clinton. At a time when the images of most celebrities are rigidly controlled by publicists and spin doctors, the 33-year-old Amarillo-born photographer has charmed and disarmed his way into portrait photography’s inner circle to become a master of access, both literal and metaphorical. But the moody eroticism or seering inspection of his peers is not for Seliger; his work is rich in color, light, and, above all, good humor. “Mark engages the child in the person he’s photographing,” says James Newberry, who taught Seliger at East Texas State University, “so the two of them go off and have adventures together.”

Those adventures have included some of the most memorable magazine covers of the last decade. For Manhattan, inc., a now-defunct business title, Seliger photographed Donald Trump leering behind stacks of poker chips at the height of the go-go eighties. For Rolling Stone—where Seliger works every bit as hard as Annie Leibovitz, the magazine’s onetime staff photographer—he dressed Ice-T, the author of a controversial little ditty called “Cop Killer,” in a policeman’s uniform in the aftermath of the Los Angeles riots. Seliger also photographed Robin Williams grinning zanily from an oversized shirt collar, Bill Clinton against an achingly optimistic blue sky, and the Red Hot Chili Peppers wearing nothing but their hands over their private parts. According to Fred Woodward, art director of Rolling Stone (and former art director of Texas Monthly), the Ice-T and Red Hot Chili Peppers covers are uniquely Seliger’s, as well as being two of the best in the magazine’s history. “To me,” he says, “those are as good as they get.”

To break down a star’s defenses—psychic and otherwise—Seliger accesses the force of his own personality. He is by nature loquacious; as a child growing up in the Panhandle town of Borger, where his father had an oil-field salvage business, he regularly called on neighbors, eager to be let in on the local news. He is also naturally funny. In Borger, Seliger thought of becoming a comedian, but he suffered terrible stage fright. (He clutched during a childhood piano recital of “The Battle Hymn of the Republic.”) “When I take a funny picture, that’s my chance to be funny,” he says. “That’s my outlet.”

Now loose as a goose and chicly and scruffy, Seliger uses that boyish energy and small-town self-deprecation to persuade the famous to buy his notion of who they are. To prepare for an assignment, he usually spends three or four days locked in his Manhattan apartment, where he reads profiles of a subject, looks at other portraits, and interviews as many people as possible. Seliger is a dedicated collaborator, conferring with everyone from art directors to members of a star’s entourage. “I find it incredibly gratifying to work with lots of people,” he says. “It always makes the picture richer.” He makes numerous preliminary sketches and often builds detailed sets. But none of that is worth much if the subject isn’t willing.

Such was the case with Olympic champion Mark Spitz. Assigned to do a 1990 portrait of Spitz for American Health, Seliger was told by Spitz’s manager that the swimmer wouldn’t do anything beyond a straight portrait. But Seliger wanted to try something new. “I’m a portrait photographer,” he stresses. “What I’m learning to do is take what I know about the person and create something that hopefully hasn’t been seen before.” Originally, Seliger wanted Spitz to stand in a water-filled Plexiglas box. “The idea was to have him contained in water, like a swimmer on display—Mark Spitz in a museum,” he says. Then, while preparing for the shoot, Seliger’s assistant serendipitously squeezed his entire body into the box, giving the photographer an even more inventive idea. Rather than have the swimmer stand in the box, Spitz could insert his whole nude-but-for-his-Speedo self into it. But how to get him to go for it?

When Spitz arrived at the shoot, Seliger sensed a more adventurous side to his personality than had been advertised. Gently, he showed Spitz a snapshot of his assistant in the box. “I said, ‘This would look very interesting,’” Seliger says. “Mark got in the box and squeezed down there, and the picture came to life.” The result was a portrait both humorous and emphatic, a commentary on the life of an aging Olympian.

At other times, Seliger forsakes charm in favor of plain old chutzpah. In October 1991 Seliger was hired to shoot Fats Domino for Rolling Stone’s twenty-fifth anniversary issue, but the musician was only moderately moved by the suggestion that inclusion in such a great project was a great honor. Seliger is well aware that for many artists a photo session is a painful process, proof positive of their advancing age in a business that worships youth. “We never feel the way we look when we get older,” Seliger says. In other words, celebrities aren’t all that interested in giving a photographer a new, improved version of themselves.

With Fats Domino, many photo sessions had been arranged and many had been canceled. When Seliger learned of Domino’s scheduled performance in Atlantic City, he wanted to shoot him there. But Domino was anxious about being photographed and tried to talk Seliger into meeting him in New York later.

Undaunted, Seliger packed his gear and headed for Atlantic City, where he charmed a hotel manager into letting him into the hospitality suite set up for Domino. There, amid a buffet of chicken legs and crudités, Seliger set up his backdrops and lights—one near the food and one in the bathroom. Then he called Domino’s publicist and announced he would be ready for Fats at five. Seliger caught the traditionally sunny Domino in a powerful close-up between shows—sweat dripping from his forehead and his eyes closed in blissful exhaustion. But not even Seliger could talk Domino into posing on the second set. “That’s not what I do in the bathroom,” Domino stated firmly.

For other projects, Seliger coaxed Chris Robinson, the lead singer of the Atlanta-based Black Crowes, to cover himself with Georgia clay, and persuaded the semi-spiritual Ringo Starr to pose as a shiva. He shot Sebastian Bach of the heavy metal band Skid Row as a pinup girl, the tempestuous duo of Mick Fleetwood and John McVie as bride and groom. Occasionally subjects refuse his concept, so Seliger has to come up with a new one on the spot—or go along with one of theirs. The Red Hot Chili Peppers posed nude after nixing the photographer’s attempt to dress them in red body paint and matching Calvin Klein jockey shorts. When all else fails, Seliger resorts to desperate aw-shucks honesty. Says Laurie Kratochvil, photography director of Rolling Stone: “He’ll say, ‘Listen, this picture may not be that important to you, but it is to me’—and it is.”

It is this dependable determination that has endeared Seliger to those who work with him. Like Irving Penn and Richard Avedon in the forties and fifties, Seliger in the eighties and nineties has affixed himself to a very few magazines that encourage him to grow. (“If I worked for twenty different magazines,” he says, “I’d be in an insane asylum.”) He came to New York in 1983, suffering from burnout after several years in corporate photography in Houston. His dream: to become a magazine photographer. Seliger worked as an assistant to Leibovitz disciple Deborah Feingold and Hollywood glamour king George Hurrell; later he went out on his own. After suffering the usual rejections of his portfolio (“I don’t see much evidence of a personal style,” one editor wrote him), he eventually landed small assignments for Esquire and, later, Manhattan, inc. The latter publication was, at the time, proving that a business magazine could generate considerable excitement if the reporting and the photography were lively. Seliger’s work for Manhattan, inc. caught Kratochvil’s eye in 1987, when she gave him his first Rolling Stone assignment. Since then, he has become the photographer she depends on most. “I know when I send Mark out, he is going to bring it back,” says Kratochvil. “I know that.”

Lately Seliger has been enjoying the kind of rising star treatment he usually gives his own subjects. He has been profiled in several magazines and can now afford to choose his assignments and experiment with different kinds of portraiture. He has done ads for General Motors’ Saturn and directed a music video, and he is working on a book of black and white documentary photographs about the heavy metal scene. His photographs for the Rolling Stone anniversary issue last fall—in which he was one of only six featured photographers, including Bruce Weber and Albert Watson—will undoubtedly give his career an even greater boost.

More important, the Rolling Stone project brought about a change in the way Seliger takes pictures. In the year he devoted to it, he relied less on props and gimmicks and produced photographs that were less complicated but deeper—“less jokey, more soulful,” according to Woodward. The Ice-T portrait, in particular, has given Seliger a new taste for controversy. “For me, that was the most interesting moment in my career,” he says. It’s now Seliger’s goal to make people think as well as laugh. “As long as I’m doing this,” he says, “I want it to be powerful.”