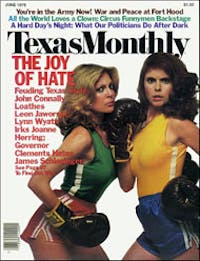 In June, when homegrown tomatoes start to ripen, I start making gazpacho, the well-dressed salad in soup’s clothing. I keep fresh batches in the refrigerator to drink like juice when I’m not in the mood for a hot meal or to serve to friends on special occasions. Gazpacho solves a multitude of summer’s problems: it is cool, it is simple, it can be made in large quantities, it is a meal in itself, yet it goes beautifully with brunch, lunch, or dinner, and it can be elegant or casual. But most important, it is one of the best ways for a tomato to express itself.

Of course, gazpacho came a long way without the tomato. The soup was concocted in Spain before the New World fruit reached Europe, and Spain today has almost as many versions of gazpacho—with and without tomatoes as—it has villages. Alice B. Toklas and Gertrude Stein wrote of an ineffable gazpacho they ate in M&aacutelaga, an entirely different one in Seville, a suaver gazpacho at C&oacuterdoba, and one at Segovia that was outrageously coarse.

I began in Madrid, which actually isn’t the best spot to look for gazpacho. In a barren, often chilly region—the climate is described as “nine months of winter and three months of hell”—Madrid’s climate does not encourage an ice-cold soup. During those three moths of hell, though, gazpacho is served in all the restaurants, but it is always named after its place of origin. The version I found most often in Madrid, and elsewhere in Spain, is called gazpacho andaluz, named for the vast, hot south-central region of Andalusia. Quite similar to the gazpacho we eat in our country, it is thick, smooth, and salmon-colored, savory with tomatoes, onions, garlic, and olive oil and tart with just the right amount of vinegar. Bread, often soaked in water or garlicky olive oil, is the thickener. Sometimes it is served ice cold, sometimes at room temperature, but always with several garnishes to give it extra body and texture.

But there is more to this story than gazpacho andaluz. The evolution of gazpacho parallels the arrival of its various components in Spain. The Romans, who occupied Iberia from the second century BC to the fifth century, brought with them olives and new methods of viticulture. Today Spain is the largest olive producer in Europe (Italy is a close second), and olive oil flavors almost every dish, except those native to the northern regions, and it is always used in gazpacho.

Where wine is produced, so is vinegar, and it too was another early ingredient in the soup. In fact, some say that the word gazpacho comes from the Latin word posca, a vinegar-and-water beverage the Roman soldiers drank.

Other connoisseurs say the name comes from an Arabic word for “soaked bread.” The Romans may have brought vinegar water to Spain, but the Moors, who occupied Spain from the eighth century to the fifteenth, delivered a more aristocratic broth (compared to vinegar water, at least). Their gazpacho, which is still served in Spain today, consisted of garlic, bread, olive oil, lemon juice, water, and salt.

The Moslems brought an advanced civilization to Spain. They built gorgeous places like Córdoba, the largest city in Europe during the Middle Ages, elaborate mosques, and palaces like the Alhambra at Granada, with its mosaics and fountains, its flush toilets and great bathtubs (which boasted three water spigots—hot, cold, and perfumed). They also brought a great abundance of food—sugarcane, rice, figs, dates, bitter oranges, mulberries, pomegranates, lemons, citrons, and almonds. Almonds became the basis for an early gazpacho that is popular today in Málaga, on the Mediterranean coast. It is an aromatic mixture of ground almonds, garlic, olive oil, vinegar, and bread. This gazpacho ajo blanco (white garlic gazpacho) is always topped with peeled green grapes to temper the garlic flavor.

Another pre-tomato gazpacho is a simple pale-green soup made of water, onions, thin slices of cucumber, small chunks of bread soaked in olive oil, vinegar, and lots of garlic. This is served today in Portugal and in the adjacent Estremadura region of Spain, and it is now often enriched with eggs.

It may be hard to imagine gazpacho without tomatoes, but remember, they are indigenous to the New World (as are green peppers, potatoes, pumpkins, corn, squash, and chocolate), and didn’t make their way to Europe until the sixteenth century. Some of the new edibles from the Americas, like chocolate, gained instant fame in Europe, but tomatoes were at first mistrusted. They were thought to be poisonous, to cause cancer, and to have dangerous aphrodisiac effects (the French called them pommes d’amour, “love apples”). For two centuries they were grown only as ornamental plants, until the Italians began to cultivate them for eating. The Spaniards followed suit and soon invented a sauce of tomatoes, onions, garlic, green peppers, pimiento, and herbs for seasoning eggs and fish.

In Andalusia, where the sun drenches the land and tomatoes grow full and ripe, the peasants began to incorporate these forbidden fruits, along with sweet peppers, into their noonday meals. Their lunch pails were wooden bowls, and in them they would blend together stale bread, garlic, and salt, then add tomatoes, sweet peppers, olive oil, vinegar, and water, stirring and pounding these ingredients with a wooden spoon. Peasants and laborers still make this refreshing gazpacho in their wooden bowls, eating little else through the hot days of summer.

The only difference between the peasants’ meals and the gazpachos I ate as first courses in restaurants and homes through Spain is the presence of garnishes: an assortment of chopped summer vegetables like tomatoes, cucumbers, bell peppers, and onions, as well as croutons and diced hard-boiled eggs, are passed around in little bowls. In the homes of the rich, gazpacho is served in a variety of ways—as a first course, a salad, or a beverage accompanying an entrée. I have even read that gazpacho can be a dessert, though I’ve never eaten it as such.

I make my gazpacho in a blender (which is becoming common in the Old World too, as blenders work their way into many households). I incorporate a carrot and plenty of fresh basil, which none of the Spanish versions call for. The basil, a key ingredient in my opinion, gives the gazpacho a tangy, sweet fragrance. I use lemon juice instead of vinegar, and my soup is darker and has more texture than the gazpachos I ate in Spain. I add sliced fresh mushrooms and grated carrots to the usual garnishes and top each serving with a dollop of plain yogurt and a handful of sunflower seeds and alfalfa sprouts.

Sometimes, when I want more protein, I spoon the soup over a mixture of vegetables and slivered tofu (bean curd), then add sprouts and sunflower seeds as garnishes. Served like this, with a slice of whole-grain bread, gazpacho is a wholesome light meal, perfect when the weather is hot. When it seems as if summer is never going to end, I fix gazpacho à la food expert Michael Field—with white wine. It is the perfect medicine.