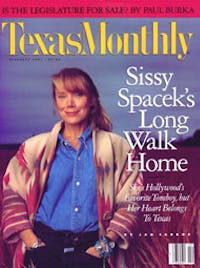 Dean Fearing, the guitar- strumming executive chef at Dallas’ swanky Mansion on Turtle Creek, hits all the right notes when he’s in the kitchen.

The Eastern Kentucky native and graduate of New York’s Culinary Institute came to Texas in 1979 to explore new frontiers in cooking and ended up pioneering Southwestern cuisine. His onion pudding, based on a family recipe from Jim Mills, the chef de cuisine at the Mansion, takes advantage of an abundant East Texas crop. With its crunchy onion-ring topping, this casserolelike dish is a snappy, unusual accompaniment to poultry, fish, or meat—and it’s good enough to bring tears to your eyes.