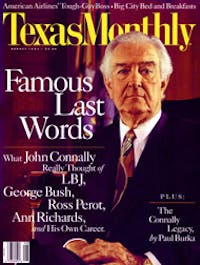 Spinning in its own distinctive orbit, Austin’s Mars has created a stylishly multicultural menu, with Middle Eastern, Pacific Rim, and Mediterranean cooking styles all getting their due. This grilled salmon in a velvety sauce punched up with Japanese horseradish demonstrates how the small, trendy restaurant makes culinary worlds collide. Owner Georgia Coleman says that the sauce, invented by executive chef and co-owner Tim Kartiganer, is “hot, but clean enough for you to taste the salmon.” When Kartiganer tosses seasonal vegetables (lightly steamed, with a glimmer of butter) into the mix, the planets are definitely aligned.