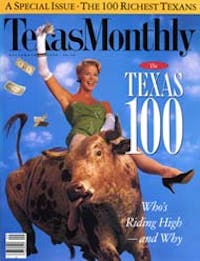 Neil Doherty, the executive chef at the Marker in Houston’s Adam’s Mark Hotel (2900 Briarpark Drive) was something of a child prodigy. By 21, he was already a head chef in his native Ireland, where he learned the value of cooking with local ingredients such as seaweed and nettles. He has been in the U.S. for seven years, and he finds Houston an ideal, if improbable, venue for Gaelic cooking, mainly because cooking with locally grown produce is popular here too. This whiskey-cured salmon is a hot-weather dream come true—no cooking required. The mellow paper-thin salmon slices, served with caper cream cheese and soda bread, are a cool entrée for a large party.