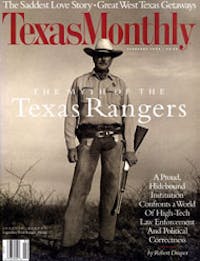 Some like it hot; Texans like it hotter. That’s why Carl Walker, the chef at Brennan’s in Houston (3300 Smith), branded his barbecued shrimp with black pepper and poblano chiles. Double-daring the Southwest palate, he paired the shrimp with his spicy version of a down-home favorite. “I wanted to make cornbread pudding more interesting,” he says, “so I pumped it up with a jalapeño jack cheese and fresh-cut corn.” Then, to avoid setting off the fire alarm, he added a cooling salad of matchstick slices of crunchy jicama prepared in the Mexican tradition. Tossed in lime juice, salt, and pepper, it is as uncomplicated as it is refreshing.