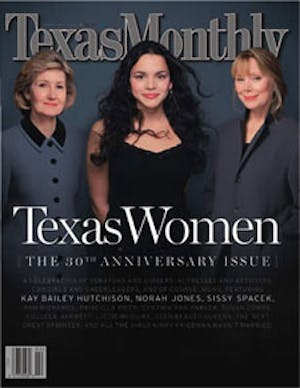 VOICES OF CHANGE Two of the state’s women’s rights pioneers—Dallas attorney Louise B. Raggio, known as the “mother of family law in Texas,” and Vivian Castleberry, the first woman to serve on the editorial board of the Dallas Times Herald, will be among the featured guests at Southern Methodist University’s thirty-eighth annual Women’s Symposium February 25 and 26. Created in 1966 to encourage women to become leaders in social and political fields (the scope is much broader today), the symposium has attracted the likes of Senator Hillary Rodham Clinton, Maya Angelou, Cokie Roberts, and Coretta Scott King. This year Raggio and Castleberry will preside at an authors’ roundtable at the event, which includes panel discussions, workshops, and speakers such as economist and syndicated columnist Julianne Malveaux. An SMU law school graduate, Raggio, now 83, led the group of lawyers that rewrote Texas’ antiquated Marital Property Act in 1967, giving Texas women, for the first time, the right to control their own property without their husbands’ consent. In 1979 she spearheaded the Family Code Project, which gave still more rights to women and made Texas the first state with a fully codified set of family laws. She and Castleberry are the co-authors of a new book about her life and her fight for women’s rights titled Texas Tornado: The Autobiography of a Crusader for Women’s Rights and Family Justice, which will be released this month by Citadel Press/Kensington Publishing. (See Dallas: Other Events.)