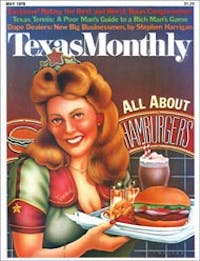 Tennis, anyone?” was Humphrey Bo­gart’s first line in the movies. Almost three million Texans have been picking up his invitation. While the game still carries all of its traditional status and style, it has burst its way out of the private clubs which were once its pri­vate preserve. Now that we have finally wised up to the supreme virtues of the game (it’s good for your health, can be played by members of either sex, and is available in short, intense doses of com­petition), it is time to dispatch one last hang-up—the concept that tennis is a pastime of the idle rich. The truth is that tennis is a game of and for the masses. Country club tennis may pro­vide the flash, but public court tennis is banking the money. Mr. Num­ber One himself, Arthur “I beat Jimmy Connors at Wimbledon” Ashe is a pub­lic court product; so are superstars Billie Jean King, Margaret Court, and Bjorn Borg. This should come as no revela­tion if you consider that tennis is basically an inexpensive game, requiring only a racket, a couple of tennis balls, some tennis pumps, and a court to enjoy. The geography of tennis courts—for the longest time, most courts were on the grounds of private country clubs—has had more to do with inhibiting the spread of the game than anything else, but that era is over. The United States adds about 5000 new courts a year, and Texas boasts some of the finest tennis facilities—public or private—in the world. In Dallas alone there are more than 190 public courts; there are more than 125 in Houston. We have looked into how to play tennis at any price and want to pass along some basic information, like, for example, how to dress. (Prices listed in this article may vary by area.) At the right are two properly attired tennis couples. The couple on the left is dressed in found tennis fashion: cutoffs and T-shirts, the principle here is whatever fits is right. The other couple is dressed to the nines. He’s wearing a Sergio Tacchini zippered warmup sweater ($40), match­ing shirt ($25) and shorts ($35), and color-coordinated sweatbands ($2). She’s sporting a 100 per cent polyester halter dress by Top Seed ($31) and a matching Marisa Christina sweater ($28). Dress up or dress down, but hit those courts. 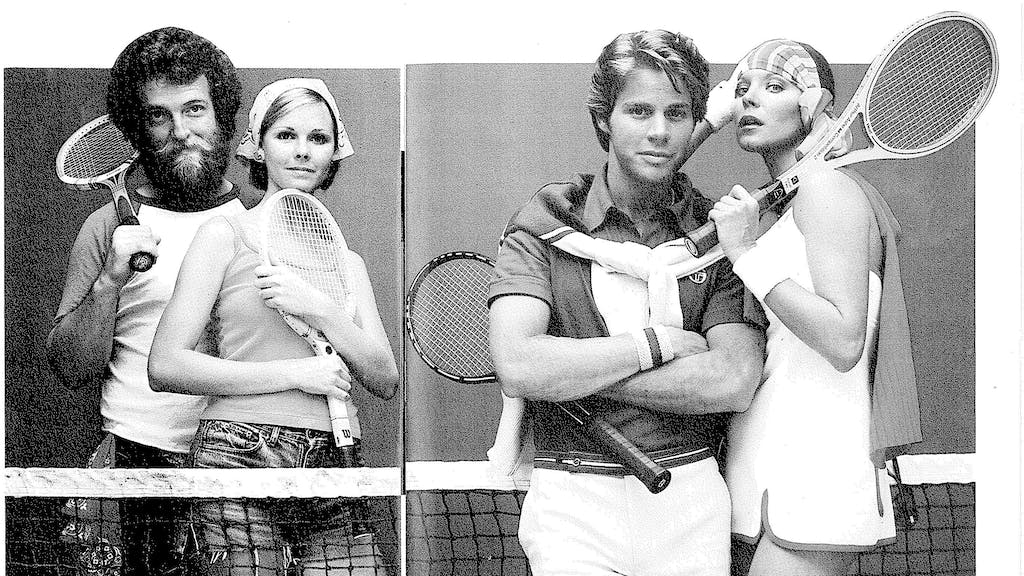 “Texas has a surpris­ingly large number of excellent tennis coaches,” says Gladys Heldman, founder of World Tennis maga­zine and a virtual walking encyclopedia of the sport. In a state loaded with good coaches, who are the coaches and pros re­spected the most? Among the best is Houston’s Sammy Giammalva, ex-Rice, ex-Houston Racquet Club pro, now at the magnificent Metropolitan Racquet Club. He has coached Harold Solomon into World Champion­ship Tennis stardom, and is bringing along son Tony, recent Na­tional 18 and Under singles winner. An­other hot tennis coach in Houston is Harry Parten of River Oaks Country Club. Jimmy Parker, head pro at Houston Racquet Club, is another name to remember. Three more in Houston: Chris Bovett, at Sugar Creek Country Club, draws high marks for his work with young people, while Helen Johnson at The Met is strongly rated for her work with women. Chancellor’s Racquet Club coach/pro Tim Heckler is also gain­ing a strong reputa­tion. In Arlington Jerry Geyman of Cen­tre Tennis Club gets the nod, along with Neil Roush at Dallas’ Inwood Racquet Club. Bobby Mooty of Northwood Club in Dal­las is another pro’s pro, as is Tut Bartzen, head coach at TCU in Ft. Worth. In the Austin area, there’s only one choice: Clarence Mabry, the dean of Texas tennis coaches. Mabry is now working at John Newcombe’s T Bar M tennis ranch in New Braunfels. If you live in San Antonio, the man to see about your game is Chip Shirley of Oak Hills Country Club. The really big boys (Rod Laver and Roy Emerson of April Sound tennis camp at Lake Conroe, and John Newcombe of T Bar M) are strong instructional drawing cards when they are here, but since these superstars spend most of their time on the circuit, court time with one of them is a little hard to come by. However, if you can get ten min­utes with the Rocket, or Newk, by all means, go for it.

Tennis is a game that puts a premium on footwork, and a good pair of tennis shoes will prove indispensable to your scrambles on the court. When you think of your legs as wheels, and tennis shoes as the tires, you begin to realize the importance of wearing shoes that will really let you roll. On his right foot the gentleman is wearing a Fred Perry leather tennis shoe ($27, from Eatonic). The Perry design has a nylon-covered urethane-foam-padded innersole to cushion shin-jarring impact on hard surfaces. The lady has a Tretorn tennis shoe ($25, from Bancroft) on her right foot and a Tred 2 ($30, from Tred 2) on the other. Tretorn tennis shoes are classic athletic footwear. The leather uppers give the shoe a long and comfortable life, while the abrasion-resistant sole is built to last. The Tred 2 comes in width sizes, a nice touch if you’re familiar with sizing problems inherent in athletic shoes (few: companies make athletic shoes with width sizes). The Tred 2 uses leather uppers and a double-depth sole; to produce a shoe with the longest active life available on the market. The sole is the secret—it has its own built in recap system. The Puma Match shoe ($25, from Beconta) on the man’s left foot gives considerable arch support while cradling the feet in padded comfort. KAEPA Inc., in Marble Falls has developed the truly innovative X-80 Radial shoe ($22)—it has double vamps and lace which unfortunately reached us too late for testing. If you can’t buy new shoes, send your old ones out West to Tred 2 for resoling (approximately $12). 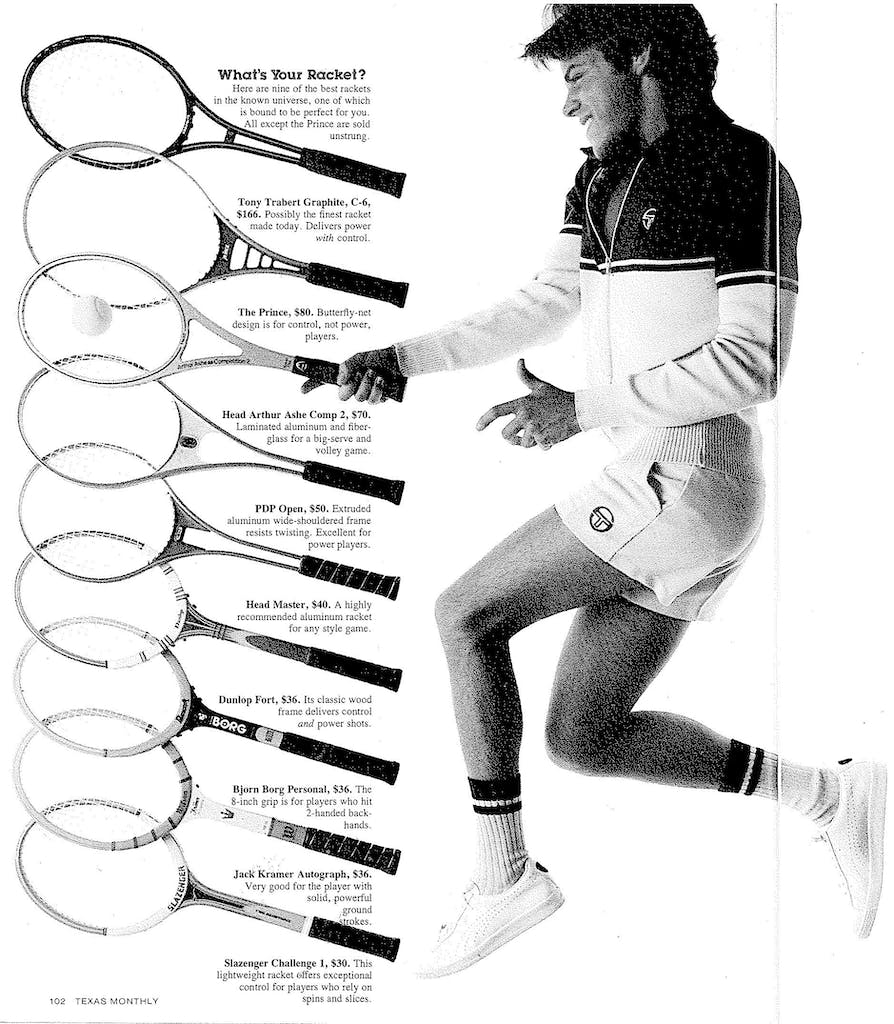 First the good news: the right tennis racket can really pick up your game. Now the bad news: no tennis racket can cure a game that is fundamentally weak, although at this very moment tennis racket designers are working on that problem. In the meantime, it is important to understand that the racket is the single most important piece of equipment in the game. Since the task of matching a player and his game to the right racket is very tricky, you should get advice at a tennis specialty or pro shop. How you shop depends on how long you have played. If you’ve been at it a while, tell the tennis pro what type of game you play, how long you have been playing, and what your approximate level of skill is. That will give the pro enough information to steer you to the best rackets for your game. The next step is to hit a few balls with each racket and make your choice from experience, not recommendation. If you haven’t played much tennis, there are some things you should know. Wood vs. metal rackets. Wood is on the way out as a racket material, but it still has its boosters, mostly because wood offers superb control. Metal rackets tend to have less control, but more power. Wood rackets fatigue fast and therefore need to be replaced more often than metal ones, they are also generally heavier than their metal counterparts. Hit with some of each and then make your choice. Nylon vs. gut stringing: Nylon is best for the beginner or infrequent player. It is not affected by weather and is relatively inexpensive. Gut is the only choice for the serious player, because it is more resilient than nylon and consequently delivers more control. It is also less durable and more expensive (approximately $25 per string job).

Dunlop tennis balls (left, $3 for a can of three) are the unanimous choice for those in the know. Slazenger’s Permacore balls (right $4 for three) have a pressureless core that extends ball life, thus cutting down on replacement. Tretorn balls (not shown; $2.50 for three) are also superior.

Once you’ve acquired the necessary gear with which to play tennis all you need for a game is a court and a partner. The swankiest court of all is one in your backyard. The private tennis court is how the status symbol in the social-climbing hearts of those who really want to toss their money around. On one block in Houston, there are five private courts, a sign of the times if there ever was one. What price a private court? If you get an asphalt-and acrylic-surfaced court, light it, add windscreens, fencing, bets, and other paraphernalia, you can plan on dropping between $10,000 and $20,000. If you have more patience than money, you can just wander down to one of the fine public court facilities that dot Texas’ cities. You might have to wait for a court, but you’ll save a ton of money. And with the money you save, maybe you can afford private lessons from Rod Laver.

Bagging It Lugging around clean shirts, extra balls, etc., can be a royal pain without a bag to carry them in. If you have the money, go for a Louis Vuitton tennis case (left, $225, Neiman-Marcus). The North Face day pack (right, $25, Wilderness Equipment) is a more economical choice

Hot Warmups Calisthenics at any cost? Suit up in a swanky chamois warmup (left, $50, Ultra Sports). Originally designed for women, it is also popular with men who like its plush comfort. The basic concept behind the sweat suit at right (free, look in your closet) is total practicality.

Slim City “You can’t be fat and play good tennis,” say the pros. If you like to eat well, in­dulge in a high-energy diet (left) that includes generous hits of selected vitamins; no fries. Superhuman will pow­er? Then an empty plate and a glass of water (right) will suffice to shrink you.

Think Positive Tennis is a mental game. If your head is together, your game will be also. If not, go to a shrink (left, $50 an hour) who specializes in sports therapy. Or read Tim Ganway’s The Inner Game of Tennis (Random House, $6.95), best described as a guide to zen tennis.

Practice Makes Perfect Playing tennis is not practic­ing tennis, and practice is what you have to do if you want to be gang busters. The ultimate in drill-mates is a Lob-Ster (left, $360, from Lob-Ster); it can toss a ball every 3.5 seconds. Or enlist a strong-armed friend (right) to toss you balls.

Don’t Stoop to Conquer Retrieving balls during the heat of a match is distracting. Why bother? You can hire a ball boy (left, $15 per match) and have your shots retrieved the way big hitters do at Wimbledon and Forest Hills. Or, if ole Spot (right) has had obedience training, let him fetch for you.