A: This is a perplexing and mysterious riddle of a situation you have brought to the Texanist. And very troubling. At least very troubling at first blush. The hidy sign, also known as the Texas wave, the Medina wave, and the one-finger wave, is a staple of Texas roadways. But as far back as 2010, the Texanist, in response to a letter not too dissimilar from yours, noted that the gesture’s usage seemed to be in an unfortunate state of decline. Back then he blamed the overabundance of high-tech doodads in the cabs of vehicles. “The explosion of vehicular computing has caused such a wadding of the mental panties that it’s a miracle today’s motoring public notices anything that happens beyond the windshield,” the Texanist proclaimed.

But even though the number of distracting gizmos has only increased since then, the Texanist will always be relentless in his advocacy for more, not less, Texas-style driving, which is to say friendly driving, which is to say driving that includes the simple courtesy of raising that one finger (index) in a kindly acknowledgement of oncoming drivers.

You introduce a different hypothesis for the dearth of hidy signs in Hico that you experienced recently: Californians and Yankees, who, for better or worse are, just like dashboard doohickeys, also on the rise, at least in certain corners of Texas. The thing is, the Texanist doesn’t recall the roads in Hico being especially overpopulated with Californians or Yankees the last time he traveled through those parts. Just regular old Hicoans, as best as he can remember. Also, Eastland is located only about sixty miles northwest of Hico. The Texanist knows of no reason for there to be a whole lot more non-Texans driving around Hico on Sunday morning than one would find in Eastland.

It’s a real brainteaser. In search of an answer, the Texanist slipped on his CSI hat, took a moment to reconstruct the scene in his mind, and came up with the only explanation that makes any sense at all. When you were headed out of Hico on the Sunday morning in question, you must have been doing so with a westwardly trajectory, possibly headed over to Dublin, even though they don’t make the special Dr Pepper there anymore. But the reason why you were going to Dublin is not important. It only matters that you were going to Dublin (which is located about twenty miles northwest of Hico), or at least headed in that direction. And also that it was a clear morning with relatively good visibility.

See, a person driving westward out of Hico on a Sunday morning would be moving away from the rising sun, with only the beautiful and well-illuminated Texas landscape ahead of him. But drivers moving in the opposite, eastward direction, toward Hico, would be heading smackdab into the bright morning sunshine. Such a scenario would render such drivers virtually blind and wholly unable to make out the fingers (index or otherwise) of oncoming drivers. Contrawise, the Texanist suspects that when you were driving through Eastland months later, the sun was sitting somewhere high in the sky, obscuring no one’s vision.

This is the only thing that makes any real sense, as the demographics of Hico just couldn’t have taken such a dire turn without it having made the papers.

But if the Texanist is wrong, and you were not heading west from Hico, or the sun was not rising behind you, or both, then the Texanist is stumped, as well. Is there a chance you have left something out of your query, something about some past indiscretion on your part in the vicinity of Hico many years ago that would make the locals, with their long, unforgiving memories, less apt to wave a friendly finger your way? If that is the case, sir, perhaps you should count yourself lucky that they didn’t flash a different finger (index-adjacent) your way.

The Texanist sincerely hopes this is not the case. 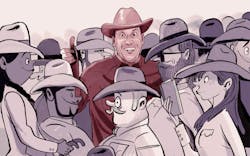 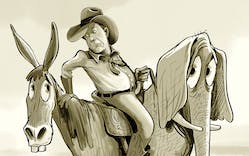 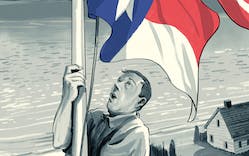 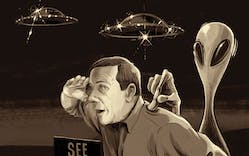