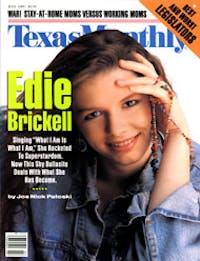 Nearly a mile away, a woman in a wet suit rides on the back of Shamu the killer whale. But here, at the opposite end of Sea World in San Antonio, on a gentle slope shaded by mesquites and live oaks, sixteen statues of notable Texans stand along a curving walkway lined with flowers.

The life size statues are mounted on black marble stands less than a foot tall so you can look them right in the eye. There are no prohibitions against touching them either. Small children crawl between the legs of Charles Goodnight and Quanah Parker; older people in particular seem to like to touch the statues’ hands, squeezing a finger or rubbing a palm. Whole families stand on the pedestals to have their picture taken with the statue of, say, Sam Houston, just as if he were their stern old grandfather, which for Texans he pretty much is. Smart alecks who come upon the statue of astronaut Ed White like to put their head in the space helmet he holds in the crook of his right arm, then shout and wave for attention. More-solemn spirits bend down to learn the title of the book Walter Prescott Webb is reading from—Webb’s own The Great Plains—or try to decipher the graphs and mathematical formulas on the notes held by Robert Wilson, a Houstonian and a Rice graduate who won the Nobel prize for physics in 1978, the only native Texan to become a Nobel laureate. Other responses reveal a huge cultural confusion. A crew of boys about ten years old stopped briefly in front of the statue of Eisenhower. He has the famous Ike grin and is dressed in his World War II uniform and peaked hat and Eisenhower jacket. “Who’s this?” one of the boys asked. “Bob Hope?”

Some people might have quibbles with this list. I thought I did, but as I substituted my names for those on the Texas Walk, I found I liked the resulting list less than the original one. These sixteen people represent every important area of Texas life, with the exception of farming. The list includes three ethnic groups and both genders; it spans the history of Texas from its founding to the present day; it has some predictable names and a number of pleasant and well-warranted surprises; and it does all of that rather effortlessly, without sounding a false note. That’s true even of Henry B. Gonzalez, who, it’s safe to assume, would not be included were Sea World anywhere in Texas but San Antonio. But it is in San Antonio, where Gonzalez has been the leading political figure for thirty years. Why shouldn’t he be honored in his own home?

The statues, though extremely realistic, manage to flatter their subjects without distorting them. Similarly, taken together, the statues present a flattering but not distorted picture of Texas and Texas history. I was intrigued by the individuals I did not know and was moved to reconsider those I thought I knew. One of the reasons the Texas Walk has such a powerful effect is that seeing a modern portrait statue, much less sixteen of them, is a rare event.

In Texas, according to an unpublished inventory by Carol Little of Longview, some 692 sculptures have been commissioned for public spaces since 1960. About half were realistic, and half were abstractions. In public areas in front of important buildings, the sculptures are inevitably abstract. That is the result of the last one hundred years of artistic styles and theory. The heroic statue of a man on horseback has long been a rarity, and statues commemorating some eminence are equally scarce in cities, although they are still popular in small towns.

During the boom, every major building was incomplete without an abstract sculpture from a famous artist. Thus, the plazas of Texas are littered with the work of Jean Dubuffet, Claes Oldenburg, Louise Nevelson, the ubiquitous Henry Moore, and many others. The most spectacular triumph of all is Personage and Birds, by Joan Miró, which stands, sassy and brilliantly colored, in front of the Texas Commerce Tower in Houston. Also in Houston is one indisputable masterpiece, Barnett Newman’s Broken Obelisk, on the grounds of the Rothko Chapel.

Other modern pieces range from the very good down to a couple of clear disasters. But even assuming that these abstractions were all the greatest works from the greatest artists, wouldn’t there still be room—wouldn’t there still be a need—for public portrait sculpture of notable men and women? Such monuments are a way of saying to ourselves and to the future, “This is what we looked like, this is what we did, and these are some of the people who were important around here.”

Still, artists who concentrate on portrait commission find it nearly impossible to earn any recognition from the art establishment. The six sculptors who worked on the Texas Walk—Jim Reno, Glenna Goodacre, Larry Ludtke, Juan Dell, Armando Hinojosa, and Elizabeth Hart, all of whom either were born in or work in Texas or both—have had their share of successes and honors within their own world. But their work is not in any major art museum in Texas or elsewhere; they are most likely unknown and certainly thought to be beneath consideration by serious students of contemporary American art. Although they sell to famous collectors—Dolph Briscoe, John Connally, Burt Reynolds, Winthrop Rockefeller, Jr., Richard Nixon, Bill Hobby, and former Mexican president José López Portillo—those collectors are famous for reasons other than their taste in art.

For the first fifty years of this century almost all statues in public places were portrait statues. They were of veterans or local or national heroes or simply a rich and powerful citizen who had left his mark on a town. They were paid for by veterans or civic groups. The grandest example of pure hero worship is the cenotaph in the plaza in front of the Alamo with its idealized portraits of Travis, Bowie, Crockett, and Bonham. One can only begin to imagine the political wrangling and name-calling that would be prompted if that memorial were to be built today. We no longer have enough agreement about our history and its meaning or even about the value of bravery in war to create such memorials. The most recent military memorial in San Antonio is the sculpture dedicated to Vietnam veterans in front of the Municipal Auditorium. It portrays a radioman leaning over a fallen comrade, his face stark with horror. There is heroism here, but certainly no glory.

These days abstract sculpture at least has the advantage, which it once did not, of being safe. It is unlikely to excite political or racial trouble; in fact the least care taken in selecting a sculpture will ensure that it won’t upset anyone. Furthermore, if the sculpture is by a famous artist, it cannot be effectively criticized on the grounds of taste, except in the private, grumbling comments of common folk, who can be ignored. All of that makes abstract sculpture the perfect aesthetic product for the people who pay for most public sculpture today, namely developers and chairmen of corporations. They know that the tenor of the age prevents them from erecting statues to themselves, although I think the results might be intriguing if they would, and a statue of anyone else seems perilous at best. Who would it be? Better to put some shape out there and be done with it.

So it is a peculiarity of our time that only in a pleasant but somewhat remote corner of an amusement park, almost a mile from Shamu, can one find a monument to the people that a Texan might consider heroic. As art, several of the statues on the Texas Walk seem very fine to me, others perhaps something less, and at least one an utter failure. But when abstract sculpture fails as art, it commands no interest whatsoever, whereas here one finds oneself still absorbed with the subjects. Lyndon Johnson stands confidently, his weight on his left foot, his Stetson held in his right hand and resting against his thigh. His shoulders are square, and he looks straight ahead as if he were certain that he could prevail over anything he might see. That all seems true enough, but he also looks at peace with himself, as if no internal demons plague him. Is that right? It’s a question I’ve been pondering ever since. In the oil fields Howard Hughes, the father, wore a tie tucked military fashion into the front of his shirt, and and that’s how he is portrayed in his statue. He is holding at his side the drill bit he invented that was the foundation of his fortune. He is wearing workman’s gloves, his sleeves are rolled up, and the veins in his forearms are bulging. He looks hardworking, lean, sweaty, competent, and in command. Are corporate CEOs still like that? Katherine Anne Porter, diminutive and pretty, is descending a pair of steps. She is wearing pearls, a straw hat, and a full skirt that furls slightly in the breeze, suggesting a ladylike sexuality. She is smiling openly. How entirely apt that this petite woman should be the greatest writer Texas has ever produced. How apt too, and fortunate besides, to find her here in company with stern Sam Houston and Quanah Parker in war regalia on a shady San Antonio hillside.