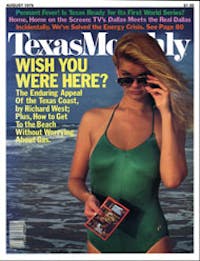 Winford Hogan, the personable president of the Kiwanis Club of Clyde (population: 2500), gaveled the meeting to order promptly at 6:30 a.m., and everyone rose for a rousing verse of “When Kiwanis Calls.” On this particular morning, Kiwanis was calling from the back room of the Dairy Queen, where the full civic pride of Clyde had gathered. Joining in the chorus were the county judge, Baptist preacher, high school principal, savings and loan president, constable, stockbroker, and Texas Electric Service manager. The only dignitary missing was the bank president; he overslept.

The Kiwanians, like several other local civic clubs, meet each week at the Dairy Queen because, far more than any other place, it has become the social, cultural, and culinary center of Clyde. Parades are formed there, political deals are closed there, and several electricians and carpenters even conduct their business there (thanks to the obliging manager, Frankie Davis, who doubles as an answering service). The Dairy Queen in Clyde, in fact, may be the busiest and most prosperous Dairy Queen in the Western world. It’s certainly the most lucrative one in West Texas, a fact I have on good authority from co-owner James Utley, who shares franchises on 38 Dairy Queens from Borger to Van Horn to Fort Stockton. The Clyde store serves 250,000 customers per year, which works out to around 100 servings per resident of Clyde. Travelers on IH 20 help out, too, for the store has the prime location at the Clyde off-ramp.

“We raised a whole generation at the Dairy Queen,” said Utley as we sat down later that morning for a marathon coffee break. “All the kids who hung out here in high school are grown now, most married with children, and they’re still coming.” A woman pulled up to the drive-in window, and Utley ambled over to wait on her. “Large sugar-free, right?” he said, and he was pouring before she had time to nod assent. “In small towns,” said Utley, “you have to become part of the community. We sponsor Little League baseball teams, help out with fund drives, work with the Scouts. We know our customers on a first-name basis, and they know us. They know that if they sit three hours with one cup of coffee, we won’t throw them out.”

It’s not the most sophisticated marketing strategy ever devised, but it undoubtedly works. Dairy Queen has been dispensing fast food since before the term was invented—McDonald’s is a mere babe in comparison—and its red mansard roofs appear on the Texas landscape with a frequency second only to water towers. There are, to be exact, 994 Dairy Queens in the state, which is about 25 per cent of the world supply, and they’re located in places as large as Houston and Dallas, and as small as Snook (population: 372), Seven Points (205), and Elm Mott (190). But unlike every other hamburger chain in America, Dairy Queen has always found its greatest strength in rural areas, where people are finicky about their food and even more finicky about who serves it to them. That’s why most stores are run by families who are native to the town, and it goes a long way toward explaining why a phenomenally successful chain like McDonald’s has little success at getting a foothold in nonmetropolitan areas.

But then Dairy Queen has had a considerable head start. The idea was born in 1938 in the heart of middle America—Kankakee, Illinois—when an ice cream pioneer named Alex McCoullogh perfected the vanilla formula that is still used today. More adept at science than marketing, McCoullogh advertised, “All You Can Eat for 10¢” and sold out his entire supply in two hours. The invention of the continuous ice cream freezer—far better than mixing new batches every two hours—saved him from his own success, and in 1941 he and partner Sherb Noble opened the first Dairy Queen in East Moline, Illinois. They trademarked the name and set about selling franchises—without much success. Six years later only ten stores were in business.

It took a Texan to make Dairy Queen famous. In 1946, O. W. Klose was an energetic grocer in East St. Louis, Illinois, but in his youth he had introduced the Maxwell motorcar to South Texas and established business contacts there. At the age of 63, he was introduced to Dairy Queen by his sweet-toothed granddaughter and quickly discovered that franchises were available for both California and Texas. Exercising his usual good judgment, he chose Texas. He then hammered out a deal that the Dairy Queen founders would later regret and got exclusive rights to the trademark in this state. To this day his family collects two cents for every dollar spent in most of the 994 Texas stores.

When Klose’s first store opened in 1947 on Austin’s Guadalupe Street, it looked like most Dairy Queens of the day: walk-up crackerbox building, low-slung, with screened windows, and usually manned by a single person. Its big attraction was soft ice cream, and the sultry summers brought droves to its door, or window. Klose quickly expanded into Dallas, Tyler, and Lufkin and was soon joined by his son, Rolland M. Klose, who quit his job at McDonnell Aircraft in St. Louis to join the family team. The younger Klose still shares the Texas franchise with the elder Klose’s step-granddaughter, Mrs. Joseph F. Schreiber, Jr., and together they have personally financed 550 of the stores.

The guiding principle of Dairy Queens in Texas was total control by the local franchisee. “Dairy Queen” became an umbrella name for a variety of building types, all selling ice cream and soft drinks, but some also selling hamburgers, burritos, moon pies, or Hostess Twinkies. The names were the same, but Dairy Queens had the diversity of local cafes, each run by an independent spirit who shaped his store to fit his market. By the sixties, most Texas Dairy Queens were selling forty or more products, while Dairy Queens in the rest of the country stuck strictly to ice cream.

There are more than a few Dairy Queen millionaires in Texas, and most of them started out like James Utley. Utley was working for a Fort Worth grocery supply company in 1969 when an old franchise became available in Midland; he and partner Barney Chapman bought it with an investment of about $30,000, and Utley, his wife, and son worked eighteen-hour days to make it work. His exclusive rights to Midland led to the opening of four more successful stores, but the real gold mines, he soon discovered, were the smaller towns of West Texas. From Midland he opened stores in Fort Stockton, Andrews, Alpine, Haskell, Panhandle, Roscoe, and a long string of other small towns, and two years ago he moved to Abilene (six stores), bought himself a farmhouse on ten acres outside of Clyde, and is now opening Dairy Queens as fast as he can build them. The Chapman-Utley chain is, in fact, the largest Dairy Queen group in the country.

The cost of Dairy Queen entrepreneurship has gone up sharply (today’s average investment is about $175,000), but the formula is basically unchanged from the one Klose used in 1947. There’s still room for idiosyncrasies—Utley is building the first two-story Dairy Queen in Abilene, complete with nineteenth-century saloon decor—and there continue to be great disparities between the best and worst stores. Most Dairy Queen franchisees, for example, belong to the Texas Dairy Queen Trade Association, a cooperative group that funds regional advertising, maintains a quality-control laboratory in Arlington, and develops new products with trademarked names (Beltbuster, T-Brand Tacos, Texas Giant, The Dude). But many of the urban stores have refused to pledge the usual 2 per cent of gross sales to join. Periodically the trade association sends out emotional appeals for everyone to pull together. “Burger King is casting a close eye at the small towns of Texas!” announced one alarmist bulletin. “McDonald’s is spending at a rate of eight and one half to one over us. Don’t become like the neighborhood grocer trying to advertise and compete against the Safeways of the world.” And by any objective reckoning, it appears Dairy Queen is a pygmy holding out against giant food conglomerates. In 1977, for example, McDonald’s spent $95 million on television advertising, while Dairy Queen spent a paltry $4.7 million ($1.7 million in Texas).

Recently, McDonald’s built a new store in Sweetwater (population: 11,574), two blocks from one of Utley’s best profit-makers. So far it hasn’t affected his sales, but he has occasional moments of anxiety. “In the long term, though,” he said, “I’m not that worried. They can outspend us on advertising. They can bring in managers trained in their special schools. They might even get a better location. But I don’t think they can ever compete with a lady behind the counter who knows everybody’s first name and has been pouring the town coffee for ten or twenty years. They can’t compete with our people.”