Last month, we brought you the twenty Texas athletes to watch during this year’s London Olympics. Now that the games have come to an end with Sunday’s closing ceremonies (Spice Girls and all), here’s a recap of which Texan Olympics brought home medals from London.

Bianca Knight, who spent a year at UT before going pro, won gold as part of the 4x100m relay.

Mexican-American runner and UT alum Leo Manzano won a silver medal for the men’s 1500m race, America’s first medal for that event since 1968.

Round Rock’s Michael Tinsley took the silver in 400m hurdles.

UT grad Brendan Hansen took home two medals: a bronze for the men’s 100m breathstroke and a gold for the 4x100m medley relay.

Volleyball
Destinee Hooker won both a medal and international attention as a key force of the American women’s volleyball team. Although the U.S. team was defeated by Brazil in the final, Hooker and her team won a silver medal, and the UT alumna ranked second overall in scoring. 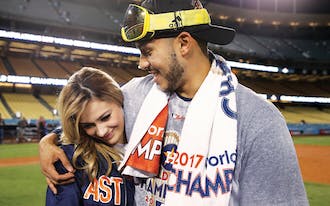 The Astros Won the World Series. Who Else Won (and Lost)?