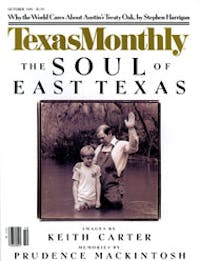 If football is the state religion of Texas, then cheerleaders are its evangelists, proselytizing with missionary zeal and spurring on the faithful to praise and glorify their hometown heroes. The Billy Graham of this world is a former Southern Methodist University cheerleader named Lawrence Herkimer. Known throughout the U.S. as Mr. Cheerleader, Herkimer is the founder and president of the National Cheerleaders Association, the first and largest such organization in the world. He will forever be remembered, however, as the creator of the Herkie jump, the all-purpose leap that is the standard by which cheerleading is judged. Far more difficult acrobatic stunts exist, but none so perfectly capture the energy and exuberance identified with cheerleading. The Herkie has that elusive quality of timelessness, having endured three generations of cheerleading.

From the grandstand, the Herkie appears to be a simple maneuver. The jumper goes into a seemingly free-form splay, the right fist punching the air and the left hand resting firmly on the hip, the left leg thrusting forward and the right leg bent at the knee and tucked behind in a modified midair split. In fact, the Herkie requires the same kind of physical dexterity shown by the athletes on the field.

Herkimer first developed the Herkie jump at North Dallas High School in the early forties. Being the shortest kid in his class had led the young gymnast to a career on the sidelines, exhorting crowds to show their school spirit. He perfected the move at SMU, where he was head cheerleader during the Doak Walker era. “Actually, the Herkie was the natural way I jumped in college,” Herkimer says. “I used to jump real high. Whenever I did, I would swing my right arm up to help me get off the ground, and it would jerk my right leg up behind it. The right arm is the counterweight, the spark for the takeoff. Before I knew it, people started imitating me.” One imitator dubbed the jump the Herkie in honor of the role model.

Herkimer’s reputation for rousing fans spread to Huntsville, where Sam Houston State band director Clint Hackney recruited him to work with cheerleaders at Hackney’s drum majors and baton twirlers camp in the summer of 1947. Herkimer’s talent for motivating cheerleaders was obvious from the start. Four years later his training program had become so successful that Herkimer quit his job as a physical education instructor at SMU to found the National Cheerleaders Association.

Cheerleading has been very, very good to the 63-year-old Herkimer. Today his Dallas-based organization, operating under the corporate banner of National Spirit Group, is a $55 million business that annually trains 150,000 cheerleaders in 49 states—all but Rhode Island—as well as in foreign countries, including Germany, Japan, Colombia, New Zealand, and Australia. It outfits them in uniforms manufactured in company-owned knitting mills. It supplies them with Pom-pons (the crepe-paper-on-a-stick creations that Herkimer still holds the patent for), buttons and ribbons from the cheerleading-association factory (Herkimer takes credit for originating the concept of booster ribbons), and custom-made cheerleading shoes and accessories. The NCA also has created specialized activities, including the aerobics program that Herkimer has dubbed Cheerobics. When the NCA isn’t training cheerleaders, Herkimer farms out some of its 450 cheerleading, drill-team, and dance instructors, as well as several thousand of the best students culled from the clinics, to appear at events such as the Macy’s Thanksgiving Day Parade, the Saint Patrick’s Day Parade in Dublin, the Cotton Bowl, and recent NFL halftime exhibitions in Tokyo and London.

Lawrence Herkimer has been very, very good to cheerleading too, elevating it from a popularity contest to an athletic discipline. He preaches that cheerleading, like the sporting events it is a part of, builds character. “It’s more than just involving students in school activities. We don’t just teach physical skills. We stress leadership, sportsmanship, responsibility. The twelfth man, so to speak, can have a lot of influence in a positive way. It’s a great carryover later in life. If we could bottle this enthusiasm,” he bubbles, “we could run the country.”

For now, that enthusiasm practically runs the National Cheerleaders Association. It helps when you’ve trained thousands of fresh-scrubbed young people to know this call-and-response by heart: “N!—Nobody’s better! C!—We’ll cheer forever! A!—Now all together! NCA !”