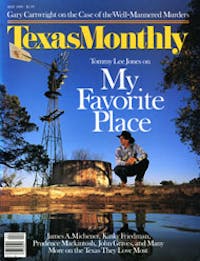 “Remember the Alamo!” right?“ Remember Goliad!” With battle cries of vengeance and honor, revolutionaries at the Battle of San Jacinto in April 1836 created a myth of Texas character that persists even today: blood for blood and to hell with the odds. Texans were the bravest and most indomitable fighters of all. But in history and mythmaking, all’s well only when it ends well. When the Texans first heard stories of Mexican troops swarming through the land, they reacted in standard and utterly human fashion—with panic and hysteria. When the chips were down, our forefathers hauled ass for the Sabine River.

Participants called the exodus the Runaway Scrape. It first took hold in January of that year in San Patricio, Refugio, and San Antonio, as news spread that Santa Anna was approaching the Rio Grande. He crossed in mid-February with his best generals, about 4,000 men, and artillery. The tiny Texan garrison at the Alamo was annihilated, and the rebellious colonists began to run for their lives. When Texas army commander Sam Houston received word of the tragedy on March 11, he was in Gonzales, a town that had sent 32 of its own men to join William Barret Travis at the Alamo. “There was not a soul left among the citizens of Gonzales who had not lost a father, husband, brother or son in that terrible massacre,” wrote colonist John M. Swisher. “I shall never forget the scene which followed the confirmation of the dreadful news. The mad agony of the widows and the shrieks of the childless and fatherless beggars all description.”

Expecting Mexican troops to overrun Gonzales at any moment, Sam Houston burned the town and ordered all civilians to follow his army eastward. People left so fast that one house was found with fried chicken, a coffeepot, and a pitcher of milk on the dinner table. Near Hallettsville, Indians killed and scalped two Irish immigrant families as they packed their belongings. Rumors spread that an alliance of Cherokees, Comanches, Kiowas, Caddos, and Wichitas had joined the Mexicans. The settlers believed that Santa Anna would kill them all: Hadn’t he ordered the execution of more than three hundred prisoners at Goliad on March 27, Palm Sunday? Houston continued to retreat, provoking desertions and mutinous grumblings among his rain-soaked troops. One of his officers set San Felipe on fire when scouts mistook a small cattle drive for a squadron of Mexican cavalry.

By April 1 the tall-grass prairie was a scene of absolute chaos. The spring rains fell in sheets; every river crossing was a terrifying ordeal. Women floundered waist-deep in mud, babies in their arms. At the Brazos, some families gave up running and simply cowered in the bottomland canebrakes. One woman described campsites full of people singing, dancing, and laughing at the ridiculousness of their plight. There was even a wedding. But the comic relief did not last. Many refugees sickened and died along the trail. Children were abandoned. Press-gangs requisitioned horses for Houston’s army; as often as not, those men were horse thieves. As the exodus reached the East Texas forest, some settlers headed for Galveston Island. More slogged through the Big Thicket. All they wanted was the safety of American soil beyond the Sabine. Wrote sixteen-year-old Guy M. Bryan, himself a hapless refugee, “Often times you would pass for hundreds of yards the prairie white with feathers emptied out of the bedticks to lighten the wagons. … O! the cruel runaway scrape—how much of distress, suffering and loss it caused!”

On April 21 Houston’s army surprised Santa Anna’s troops during their siesta at San Jacinto. Bryan recalled receiving the news: “I could see what seemed a horseman coming rapidly towards us, he passed along the swaying line of people, they shouted and jumped about throwing up hats, bonnets … at length he passed our wagons his horse all covered with foam shouting hoarsely the Texas army has killed and captured all the Mexican Army, stop, go back to your homes.”

The Texans had, in a single day, transformed themselves from victims to victors, and the legend of virility and martyrdom that they were shaping could not admit the embarrassment of the Runaway Scrape. Almost before the episode was over, it was relegated to the fine print of history. As he departed from his home, one Major Bynum locked up his china and valuable furniture. When he returned, he found that other refugees had broken in and butchered a hog on his fine mahogany table. They were, after all, only human.