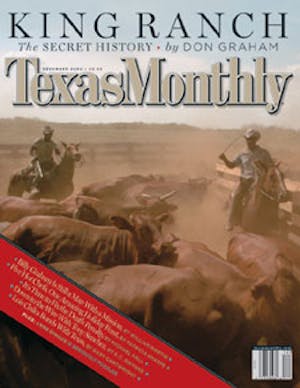 THERE ARE RANCHES BIGGER THAN the 825,000-acre King Ranch, but not many can boast bigger legends.

The ranch is such an inherent part of Texas that schoolchildren were once required to memorize facts and figures about the territory reported to be bigger than the entire state of Rhode Island. An entire town, Kingsville, was established in 1904 when Robert Kleberg, Captain Richard King’s son-in-law who succeeded King after his death in 1885, convinced the railroad to lay tracks through the ranch and make a stop.

King Ranch was founded in 1853 after King traveled north from Brownsville through the Wild Horse Desert, where he encountered the Santa Gertrudis Creek, the first water he had seen in over a hundred miles. The creek was an oasis in the desert, and King was inspired by the location to found his livestock operation there. The King Ranch is a dream—and we’re talking a Texas-sized dream—monumentally realized.

Although the famous Running W became the ranch’s official brand in 1869, brands such as the HK and LK were used early on.

Some cite tick eradication as Kleberg’s chief contribution to ranch management and the cattle industry.

King Ranch became home to a Triple Crown champion when the ranch-bred racehorse Assault won the title in 1946. Assault eventually had eighteen victories over the course of his career and won $674,720.

The ranch’s workers eventually became known as Los Kineños — King’s Men, harkening back to the days of Richard King’s founding of the ranch.

In the early days of King Ranch, animals such as cattle, horses, sheep, and goats were tested as grazing animals.

The original 15,500 acres of land the ranch purchased was a Mexican land grant known as the Rincón de Santa Gertrudis.

King Ranch is general partners with Consolidated Citrus, the nation’s largest citrus grower. Together, they operate 40,000 acres of citrus fruit in southern Florida.

King was one of the first ranchers in the west to fence his land, a significant innovation in the accepted wisdom of ranching.

In 1961, the ranch was appointed by the National Park Service as a National Historic Landmark.