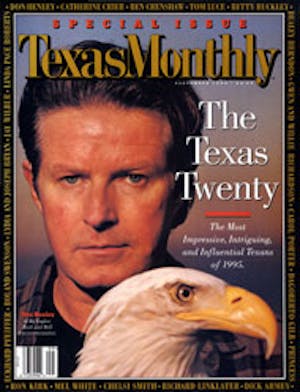 Worshiped by coffeehouse regulars, fawned over by film students who see him as their liberator, Richard Linklater is in fact a closet conventionalist, a throwback in slacker’s clothing. He loves the labor of filmmaking and doesn’t care if it makes him rich. Listening to him discuss his future projects in his genial if somewhat jittery voice—”After this Western bank-robber movie, I’ll probably do my Texas high school football movie, then the Galveston movie, then the Huntsville movie . . .” —you cannot help but wonder if the mop-haired 34-year-old will suddenly bolt past you and out the door of his office, gathering potential cast members as he races down the street.

The man who made Slacker (1991) is easily misunderstood as being one himself, and the rather narrow scope of his follow-ups—Dazed and Confused (1993) and Before Sunrise (1995)—enables some to write him off as an artsy ditherer. “My early work isn’t exactly a calling card to the industry,” he admits. “I sort of set out to be the little rodent that ate the dinosaur’s eggs.”

Indeed, there’s a vaguely subversive quality to Linklater’s ascent. The Huntsville native studied literature rather than film during his brief stint at Sam Houston State University before wearying of higher education and working on an oil rig. After three years of roughnecking, he took $18,000 in savings and relocated to Austin, where his pedestrian interest in movies developed into a nocturnal obsession. By the mid-eighties he had become one of the city’s many do-it-yourself filmmakers, inconspicuously producing 8mm short films. When in 1989 he began to round up several dozen Austin flakes and cast them in unpaid roles for a $23,000 send-up of, well, Austin flakes, Hollywood’s cultural elite did not exactly respond with a frenzy of conference calls.

But Slacker and Linklater’s two other features, for all their modest aims, have gained remarkable praise for their comic astuteness and, above all, their dead-on renditions of distinctly American characters: the fuzzy-headed conspiracy theorist in Slacker, the ubiquitous high school hanger-on in Dazed and Confused, the charmingly full-of-himself Eurailpass traveler in Before Sunrise. In an industry where the average movie costs $30 million to make, Linklater has always gotten by with less (Dazed, his most expensive endeavor, cost only $6 million), has never exceeded a budget (“I don’t take much money up front when I’m writing, my notion of ‘fair’ being that if the film sucks I don’t deserve money”), and has never lost money. Reliable work counts for something—no doubt the opinion of Ted Turner’s Castle Rock Entertainment, which pays the overhead at Detour Filmproduction, Linklater’s Austin office, in exchange for the right of first refusal on all of his projects.

“The goal of Detour is to produce a lot of movies, and not just mine,” says Linklater. That he is determined to succeed makes his role in the burgeoning Texas film industry absolutely pivotal. Among Texans who have earned considerable clout in Hollywood, Linklater may not come to mind as quickly as Tommy Lee Jones, Sissy Spacek, and Bill Wittliff, but his pull is of a different and no less significant sort. With Detour, he is giving young Texas filmmakers a launching pad westward. And as for his own movies, he is one of the only Texas filmmakers whose work has been internationally honored: He won the Silver Bear award at this year’s Berlin Film Festival for Before Sunrise, which months before had been introduced by Robert Redford at the prestigious Sundance Film Festival.

None of this came by luck. Linklater converted his own engaging ideas into viable projects, did the hard work at the right price, and learned plenty of lessons. He won’t go backward. “It really irks me when people ask me if I miss my days as an independent,” he says. “I tell them, ‘Oh, yeah, I really miss going to the bus station to pick up film and borrowing money to pay for processing and having my phone disconnected.’ Making that first film was like going to war. You either die or survive.”