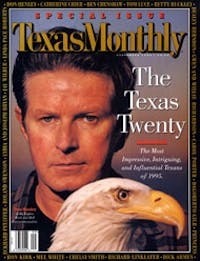 One observer called it “a Martin Luther King moment.” Certainly the city of Dallas had never seen anything like it. Two predominantly gay choirs, the Women’s Chorus of Dallas and the Turtle Creek Chorale, together sang “We Shall Overcome.” The Marin Gonzales and Los Rayos de Guanajuato Mariachi Band played a south-of-the-border boot stomper. And thousands of spectators, some crying like babies, joined hands, among them former governor Ann Richards, House Speaker Pete Laney, state comptroller John Sharp, the Reverend Zan Holmes (the University of Texas’ first black regent), Dallas philanthropist Nancy Brinker, Congresswoman Eddie Bernice Johnson, 84-year-old Hispanic activist Pancho Medrano, and the city’s first Asian municipal judge, Don B. Chae. All of this to celebrate the swearing in of Ron Kirk, the first African American mayor of any major Texas city. Once known as the city of shame, Dallas had been magically transformed into the city of hope.

Just as it took hard-line anti-communist Richard Nixon to open diplomatic relations between the United States and China, it may require an African American mayor to prove that Dallas is—and has been for some time—a remarkably diverse city. “We have the same problems as every other large city, and they’re not all racial,” the 41-year-old Kirk said in an interview a few weeks after his inauguration in early June. “We need to get people to commit to an urban lifestyle. A lot of people haven’t come to grips with Dallas as an inner city, but that’s what we are.”

Near the top of Kirk’s agenda are two urban lifestyle issues that would have been unthinkable to almost all the previous mayors who have shaped Dallas in the twentieth century: a downtown sports arena built partly with public funds and a multimillion-dollar public expenditure to turn the downtown leg of the Trinity River into a commercial and greenbelt showplace. Building a sports arena for Dallas’ professional basketball and hockey teams is no affront to free enterprise, Kirk argues, but rather its logical philosophical extension. “The city has a vested interest in helping any private business like the Mavericks or the Stars that brings a half-million people downtown in the evening during the season,” he says. “What makes a downtown viable is what happens after six o’clock.” Similarly, Kirk supports the much-discussed Dallas Plan for the Trinity River as a regional approach to an urban problem. For decades, leaders in both Dallas and Fort Worth have talked about opening the Trinity to navigation, but Kirk’s plan to develop the river has something for everyone—flood control, freeing up traffic on I-35 and I-30, and converting a muddy, foul-smelling river bottom into a commercial and recreational area resembling San Antonio’s River Walk. “Over the next twenty years,” Kirk predicts, “this project will be as dynamic and as strong an economic catalyst as DFW Airport has been for this region.”

In addition to these economic initiatives, Kirk has the broader mission of guiding Dallas’ notoriously fractious city council down a more conciliatory path. Kirk believes the voters gave him a mandate to do exactly that. “I got almost sixty-three percent of the vote,” he says. “A majority agrees that we must look beyond race and partisanship and get on with our common agenda of rebuilding this city.” With the enormous store of goodwill he has brought with him into office, Kirk may have the tools to shape Dallas into the city it has always imagined itself to be.