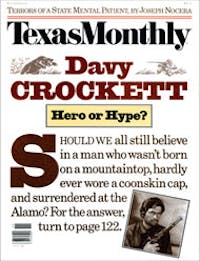 He lives in Santa Barbara, California, now, where his real-life status as a powerful real estate developer has more or less shouldered aside his long- ago fame as an actor. But when Fess Parker served his hitch as Davy Crock­ett, neither he nor Walt Disney nor the nation itself was prepared for how deeply this figure would matter to an America that in the mid-fifties felt col­orless and constrained. Davy Crockett was a perfect antidote, and Fess Park­er was a perfect Davy.

Fess pulled into the parking lot of the La Cumbre Country Club in Santa Bar­bara. His Mercedes appeared to be too small for him, since the top of his head grazed the car’s ceiling. The thought occurred to me that he would have been more comfortable driving with his head poking through the sunroof. He is, after all, six foot six.

Fess was wearing a peach-colored polo shirt and tan slacks. His hair was a statesmanlike shade of gray, worn a little longish-no sidewalls for the man who once played Davy Crockett. He had a great squint. I found him to be as charming and familiar as a favorite uncle. After lunch he urged a piece of pecan pie on me and seemed to draw some satisfaction out of watch­ing me eat it.

Back home, of course, is Texas. Fess Parker was bom in Fort Worth on Au­gust 16, 1924, one day shy of Davy Crockett’s birthday of August 17. He got the name “Fess” from his father, who was named after Senator Simeon Fess of Illinois. When he was three months old the family moved to San Angelo. As a pup, Fess spent a lot of time in the San Angelo public library, studying Texas History Movies, a car­toon chronicle of Texas. “I didn’t focus on Davy Crockett,” he recalled. “I was more interested in Sam Houston and Stephen F. Austin.”

At the University of Texas he flirted with law school but eventually gradu­ated in 1950 with a degree in history. While at UT Fess appeared in a pro­duction of Time Staggers On, and with the encouragement of Adolphe Menjou, who was visiting the campus, he moved to California to try to get into the pic­ture business.

He did okay, landing bit parts in films such as Untamed Frontier, No Room for the Groom, and Dragonfly Squad­ron. Once, he was cast in an episode of Dragnet and, because of the diminutive stature of Jack Webb, had to play his scenes on his knees.

In 1954, searching for an actor to play Davy Crockett, Walt Disney screened Them! a classic sci-fi movie of the mutant-insect genre. Disney was origi­nally interested in James Arness, the film’s star, but his attention was divert­ed by Fess Parker, as a befuddled pilot from Brownsville who in one memo­rable scene tries to convince himself that he really has seen a swarm of gigantic ants.

Disney put this obscure actor under personal contract, and Fess became Davy Crockett. When I asked him about the two years he spent in the grip of Davy hysteria, he gave himself over to a moment of solemn reflection.

“It was a blend of intermittent terror interspersed with excitement and fa­tigue. All of a sudden I’m addressing state legislatures and opening base­ball games. I traveled to forty-two cities and thirteen foreign countries. On the average, I shook hands with three thousand kids every day.”

He remembers those kids fondly and with some poignancy. For instance, when he visited Vietnam, in 1968, he was struck with an uncomfortable thought. “I suddenly realized that all these kids fighting this war were the Davy Crockett generation. That was very painful. Some of those guys I was talking to flew off in their planes the next day and didn’t come back.”

Fess continued acting after Davy Crockett played out, but as a seri­ous actor, he was hobbled by the im­age. (Though he was once considered, weirdly enough, to play James Bond.)

For a few years in the early seven­ties, Fess was back in his coonskin cap again, playing Daniel Boone on TV, but after that he’d had enough of being typecast.

“I decided to do real estate and just take a walk,” he said. In this field he proved to be extraordinarily gift­ed. He began with an upscale mobile- home park in Santa Barbara. Time staggered on, and now he is nearing completion on Fess Parker’s Red Lion Resort Hotel, a $60 million hotel and convention center on Santa Barbara’s beachfront. The project was fought all the way to the California Supreme Court by residents who were alarmed by the magnitude of change it would surely bring to their formerly sleepy coastal paradise.

Nevertheless, there it is, almost fin­ished now-a humongous but surpris­ingly graceful thing. As Fess Parker took me through it, pointing out the places where restaurants and court­yards and boiler rooms were to be, I couldn’t help but think that this was the project of a man who had been present and alert at the creation of the Disney empire.

So, as to Fess Parker today: He’s thoughtful and ambitious and has not forsaken the common touch. He’d make a better Davy Crockett now than he did in 1954. He and his wife, Marcy, a former singer, divide their time between Santa Barbara and Palm Springs. His friend President Reagan calls him every year on his birthday. Dressed in a suit, he has a pronounced resemblance to John Connally. He has political ambitions and almost ran for the Republican nomination for the U.S. Senate this year.

Only once, however, during the day I spent with him, did he say anything that made him sound like a politician. When I asked him about the awkward revisionist line that Davy Crockett sur­rendered at the Alamo, he said, “My mind is closed. I really can’t think about that in terms of reality.”

On the other hand, his mind may not be completely closed. He’s been talking to Buddy Ebsen, who played Crock­ett’s sidekick, Georgie Russel, in the Disney film, about making a sequel. Fess says that I can’t tell you the plot, but what if, just maybe, Davy had sur­vived the Alamo… 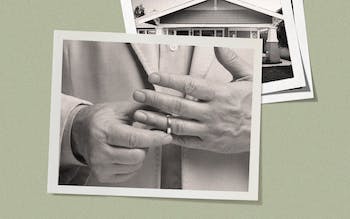