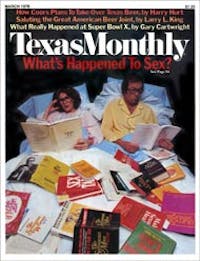 The photographs on these pages remind me of my first beer joint, on the outskirts of Kermit, near the New Mexico border. It was a converted “filling station,” with the dry gasoline pumps still standing out front; though I’ve long forgotten its name, it was there—in the summer of 1943, at age fourteen—that I originally got myself all vomity drunk and required the assistance of older heads in the oil field crew to make it back to the bunkhouse. A jukebox cried out the wartime’s country songs of the period (Each Night at Nine, Soldier’s Last Letter) and on the tiny dance floor a young roughneck wearing a wispy blond mustache awarded a lady old enough to be his mother the first French kiss I ever saw. I went back as soon as I healed, and for many nights thereafter. You might say I grew up in beer joints and early learned their many uses.

After work, the grunge of the oil patch under our fingernails and its greasy scents in our pores, we made a beeline for the nearest beer joint whether in McCamey, Odessa, Wink, Jal, Eunice, Hobbs, Monahans, Midland. Nobody asked if you were 21, then the legal drinking age. The presumption was that if you performed a man’s work you were entitled to a man’s recreations; more than once a deputy sheriff, constable, or policeman wiped blood off me, advised me to watch my ass, and offered to drive me home. You could get hurt in those places then; I think it was the sense of wild adventure offered by West Texas beer joints that most attracted me. Macho conduct was much in vogue; fast action might be had in beer joints even in dull, dusty burgs boasting only blinker lights, a single picture show, and one-gallon parsons. I ultimately found a joint too rough for my tastes: The Nip ‘n Sip, in Odessa, which was closed down by the authorities during the early Fifties oil boom after gunplay and switchblades became too prominent.

Mischief seemed to occur more readily in joints with “live” dance bands: The Ace of Clubs, Danceland, The Pelican—all long gone. Jukeboxes are for drinking beer to or for singing along with; bands are for dancing, and dancing can lead to trouble when ladies are in shorter supply than drinking gentlemen. The ladies were great drawing cards, however; though most of us knew only modest luck in our attempts at what loosely might be called romance, the dream was always there. Blackie, a middle-aging tool pusher selected as one of my early heroes, put it plainly: “Hoss, you ain’t likely to get none at the bank, over at the post office, or going to BYPU.” There was a schoolboy’s thrill in hot-eyed flirting with tough barmaids whose heart-shaped little faces and tightly wrapped bodies sometimes tempted you to run off from home for a couple of hours. The trouble was that after a while you’d have to hear their miseries and they came well supplied with these: husbands who beat them, hot checks on the street, children with congenital diseases.

As I grew older, I came to appreciate the gentler, more social qualities of certain beer joints. The shuffleboard games and pool tables with their familiar nicks and clicks. The tall tales in bull sessions attracting newsmen, trial lawyers, and other natural raconteurs. The earthy observations and high glee of Good Ol’ Boys with spit curls and their sleeves rolled up to exhibit their biceps; the rolled sleeves served, too, as a place to carry cigarettes. The quiet old men sucking their beer bottles and seeking nothing more than the shade. The beery banquets of hard-boiled eggs, salted nuts, pretzels, potato chips, spicy boiled beef, and similar stomach junk. The jokes and the camaraderie when the telephone rang and a half-dozen voices rang out: “Tell ‘er I ain’t here.”

If I could name but one thing that beer joints provide, greater than all their other many gifts, it would be music. Jukebox music, preferably country and western. Hell, got to be country and western! I am not comfortable or happy in a beer joint, cannot give it a star rating, unless the guitars are jangling and the fiddles whining behind the voices of such as Ernest Tubb, Willie Nelson, Tom T. Hall, or Merle Haggard, as they sing of walking the floor over you, blue eyes crying in the rain, old five and dimers, making it through December. Never do good-hurtin’ old memories come flooding back quite so effectively, never are concerts quite so personal, as when that beer drankin’ music floods the soul and the beer is cold enough to ache your teeth almost as much as the music aches your innards. It is no less—as Thomas Jefferson said of the presidency—than a splendid misery; it can almost make you glad that the Taddy Jos and the Linda Lous once took pains to break your heart.