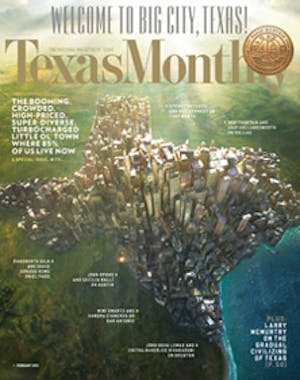 These days El Paso can feel like a big city (especially during rush hour on Interstate 10), but it’s still close-knit enough to retain the qualities, both good and bad, of a small town: there’s a coziness to it, which residents boast about, and yet also a fair amount of squabbling, the kind of brother-and-sisterly infighting that makes it hard to get things done. There’s no better example of this than Plan El Paso.

The urban redevelopment scheme first got national attention in 2011, when it won a Smart Growth Achievement award from the Environmental Protection Agency. Some nine hundred pages long and beautifully illustrated, Plan El Paso was so extensive and cutting-edge—focusing on walkability, historic preservation, gorgeous public spaces, environmental cleanup, and efficient public transportation—that outsiders couldn’t help but take notice. “It is among the best, most articulate comprehensive plans I have ever seen,” wrote sustainable-planning expert Kaid Benfield on the website Atlantic Cities. In a city more used to making news for stray bullets zooming in from Mexico and crooked officials raiding the public till, the sense of accomplishment was palpable. “Let’s seize this moment,” wrote city manager Joyce Wilson in the El Paso Times last March, days before the city council unanimously approved the plan.

Urban retooling, of course, is the activity du jour: Houston is working on EaDo, short for East Downtown, a project that’s luring young professionals into an area once dominated by warehouses and freeways; Dallas and Fort Worth are spending billions to revamp the Trinity River for recreation; San Antonio’s Pearl Brewery has wooed hip restaurants and other businesses, including the Culinary Institute of America; and Austin’s Waller Creek Tunnel Project aims to encourage new high-rises by redirecting floodwater out of downtown. But what sets Plan El Paso apart is its citywide level of ambition. As you know if you’ve visited downtown lately, it is in dire need of upgrades: century-old buildings stand vacant, their windows shuttered and shattered. (Last spring, the former law office of gunslinger John Wesley Hardin caught fire, and the building burned to rubble.) The idea behind the plan is to reverse this decay by attracting people into the city’s center. It also recommends replacing the 33-year-old toaster-oven-shaped city hall with a more classical-looking building.

But if that sounds to you like the sort of thing El Paso would go gaga over, then you don’t know El Paso, where residents’ priorities can be so disparate that something as seemingly benign as an artwork can set off bitter conflict, as happened in 2003, over a proposed downtown statue of Juan de Oñate. While some El Pasoans considered the Spanish conquistador worthy of recognition for establishing the first European settlements in the Southwest, others denounced him as a monster who massacred Native Americans, and the two factions squared off in letters to the editor and at an angry, tearful city council meeting. (Eventually the statue was installed out by the airport.) So it was hardly surprising when, barely three months after Plan El Paso was approved, citizens were turning on one another again.

To understand why, you have to go back to 2006, the year that the city council adopted a precursor to Plan El Paso known as the Downtown Plan. Developed by the Paso Del Norte Group (PDNG), an exclusive association of private-sector leaders, this plan aimed to improve downtown by building a sports arena, a hotel, shops, and an “arts walk” resembling San Antonio’s River Walk. To make room for these changes, the plan also marked swaths of Segundo Barrio, a historic yet faded neighborhood, for razing.

The proposal quickly exposed some deep divisions. For generations, Segundo Barrio has been a way station for Mexican immigrants and ground zero for political and cultural movements, and for many El Pasoans, it represents sacred ground. Yet the plan targeted many of its buildings, and without giving residents prior notice. This infuriated the city’s Chicanos, a group of politically conscious Mexican Americans who have fought since the sixties and seventies to advance their civil rights. Though Latinos now make up 82 percent of El Paso’s population, they remain disproportionately poor, and activists were bothered especially by the fact that the PDNG leaders behind the plan were mostly white and very rich.

Those in the PDNG, meanwhile, saw themselves as being in a position to bring some much-needed prosperity to El Paso. The group’s most high-profile members, such as developer Bill Sanders and Western Refining CEO Paul Foster, were known for their civic investments. Sanders, widely regarded as the godfather of the real estate investment trust, or REIT (an arrangement that turns skyscrapers, parking lots, and housing tracts into stock market shares), had returned to his native El Paso after years away to establish REITs on both sides of the border. Foster, the only billionaire in the city, was known for his charitable contributions; his gift of $50 million in 2007 to build a medical school would make El Paso the only Texas border city with such an institution.

But the secretive nature of the PDNG—membership is by invitation only, and when the plan was unveiled no formal roster had been disclosed—as well as the group’s reticence to engage the media, soon raised suspicion about its motives. At the time, Sanders was developing an industrial and residential complex near El Paso, and news that Mexican developers across the border had been using thugs and dogs to evict poor residents in a similar urban renewal scheme fueled rumors (all denied by Sanders’s company) that the two sides were in cahoots. These misgivings and gossip turned to outrage when the city council, trying to promote a new vision of El Paso, unveiled a PowerPoint presentation that used unfortunate imagery: “old” El Paso, represented by a photo of a Mexican grandpa in a Stetson (the text described him as “dirty,” “lazy,” and “uneducated”), and “new” El Paso, represented by head shots of Matthew McConaughey and Penelope Cruz. This caused such a furor that soon a protest group had formed to actively fight the Downtown Plan. The project eventually stalled but not before many longtime friendships in the city had dissolved.

So when the city council initiated Plan El Paso in 2010, it was eyed with both hope and caution. The PDNG signed on again, and a “quality of life” bond election was slated for November 2012 in which half a billion dollars would be earmarked for, among other things, fixing up the zoo, building a Hispanic heritage museum, and putting in a triple-A baseball stadium downtown, something that excited PDNG members, including Foster. He envisioned a $50 million, publicly funded arena whose minor league games—played with a team he planned to invest in—would attract businesses to the city. “Give them things to do,” he told the weekly El Paso Inc. “Give them a vibrant downtown and family entertainment.”

But nothing is ever simple in El Paso. The plan appeared to be going pretty smoothly until one day last June, when city manager Wilson made a sudden announcement. A baseball team (later revealed to be the Tucson Padres) was ready to sign with Foster and his partners, but only if a brand-new stadium was assured. Within hours, a vote was taken—but only by the city council. El Pasoans would still get their day at the polls in November, but now the stadium was already approved. The only question to be put to voters was whether to finance it with a hotel occupancy tax on out-of-towners. In another shocking move, the city council decided to make room for the ballpark by dynamiting city hall. Staff would move but not to the new building sketched out in Plan El Paso. Instead, civic business would be parceled out to scattered sites around town, and El Paso would no longer have a city hall.

Soon civil war had broken out, as Chicano activists were joined by antitax protesters and populists. Lawyer Stephanie Townsend Allala, a former TV and newspaper reporter, staged protests and urged El Pasoans to vote against the hotel tax. Convinced that the PDNG was becoming a shadow government, she filed an open-records request to obtain city council emails and then posted them online. (No legal wrongdoing was revealed, though one email from Wilson calling the protesters “crazies” did stir the pot.) Meanwhile, Mayor John Cook began saying the demolition of city hall was a bad idea. Arguments erupted on Facebook and in public, and a few people staged an Occupy City Hall protest. By summer’s end, it looked as if the PDNG—which was spending hundreds of thousands of dollars on a PR campaign to pass the bonds—would get a no-confidence vote on Election Day. Rick Horrow, a sports-arena consultant hired by the PDNG, would later say he’d never seen so much conflict over a ballpark.

Then November 6 dawned. By nightfall, it was clear that the bonds, including the hotel tax, had won by a landslide. In the El Paso Times some days later, one professor speculated that the victory represented “a generational change.” Was he right? Were the concerns of the city’s Chicanos now being outweighed by a younger crowd more interested in baseball? Or were El Pasoans just willing to take a gamble on much-needed economic development? In the end, no one knows for sure. No one bothered to do exit polling. But one thing is certain: hundreds more pages of the El Paso Plan remain to be realized in concrete, brick, and mortar. And whatever the next development phase is, residents will fight about it, because that’s how El Paso is. It couldn’t be any other way.