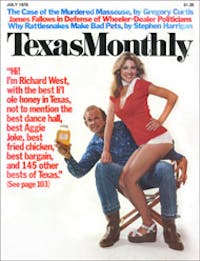 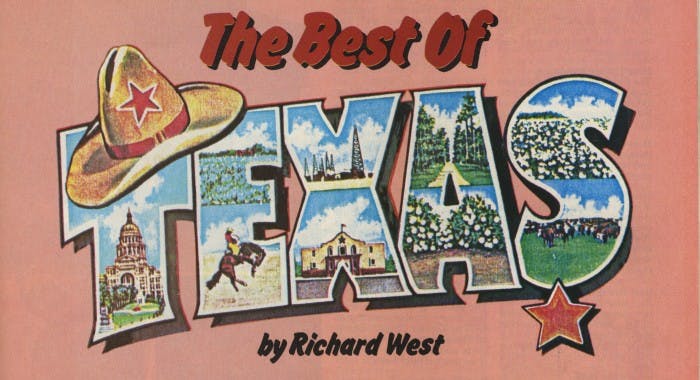 There is no doubt that Texas-born actress Farrah Fawcett has the Best Teeth in Texas. Actually, these teeth now live in California, but they spent their formative years and attained greatness right here. If they rot and turn the color of charcoal in Hollywood, it will be because she wasn’t true to her school, because she moved out of state to live Out There. But today they are matchless, the sort of teeth that captured the Six Million Dollar Man, who happens to be Mr. Farrah Fawcett.

We Texans have always bragged about having the best little old this and the best little old that. I am on the road an average of 1500 miles a month reporting for this magazine and have been known to pick the Best Bean in a bowl of chili or argue for hours the amenities and deformities of Texas’ Best Beggar. Mighty Red Chadwick, Texas’ Best Soothsayer, has me beat, though. He once figured up how many insect splats filled up a windshield and then picked Best Grasshopper Smear. That’s why I like Red. He would never fail to have an answer to a question like “Where’s the Best Barbecue in Texas?” He’s wrong about the barbecue, of course, but, by God, he’s got an opinion.

Alas, the Mighty Reds are hard to find in Texas these days.

While folks rant and rave over unimportant, things like Jimmy Carter’s religion and the weather, hardly anyone ventures truly important judgments on what’s the Best Drugstore in the state or where’s the Best Fountain Coke. Knowing the Best Waitress and Best Turkey Sandwich in Texas will improve immediately your journey through life. Unlike Rolfing, TM, TA, EST, etc., or those other silly caprices, it is cheap and easy. Also, many of the Best in Texas are the best anywhere. Who clones it better than the Kilgore Rangerettes? The Radio City Music Hall Rockettes? The Tyler Junior College Apache Belles?

No. Kilgore clones are the nation’s fairest and cloniest.

So here they are, the Best in Texas. If you continue to hemhaw and weasel around when asked to name the Best Railroad Station in Texas, it’s not our fault. Read and learn. Certainly disagree. But I hope to disprove the adage, you can take to horse to water, but you can’t make him drink. If trouble develops, I’m calling David Hoelscher, Texas’ Best Farmer. 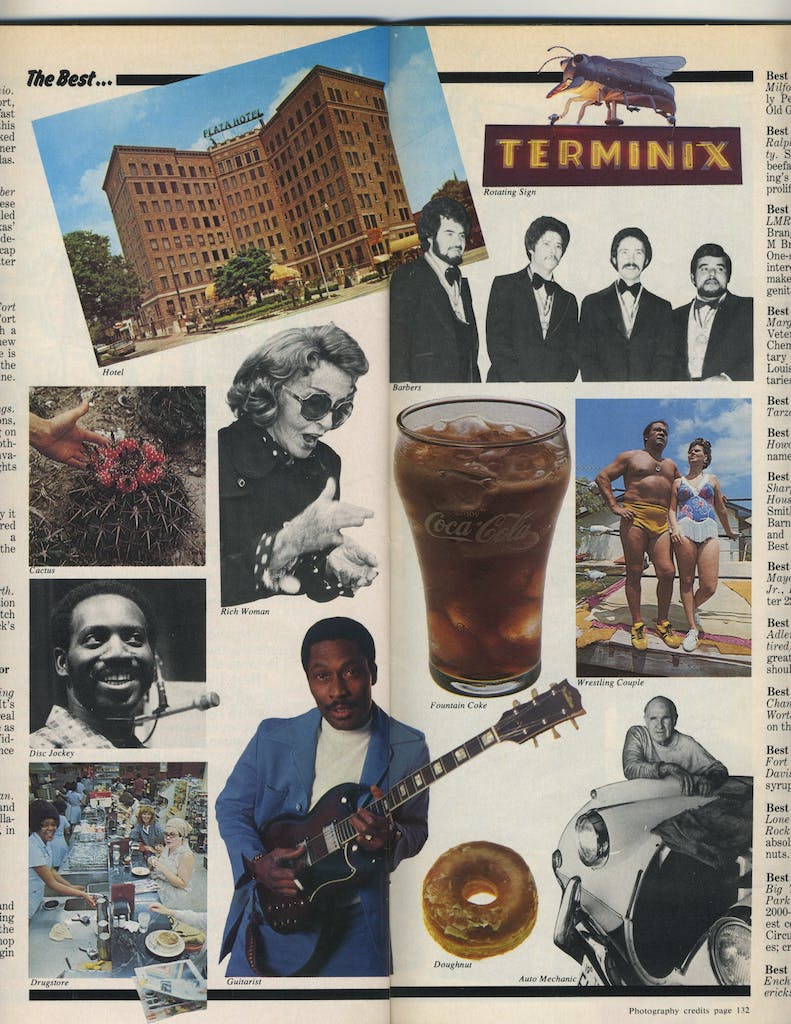 Best Old-fashioned Hotel
The Plaza, Houston. An apple and a glass of sherry brought to your room at night; free wake-up coffee in the morning. Big rooms, real furniture (and real coathangers).

Best Turkey Sandwich
The Country Store, U.S. High­way 188, west of Goldthwaite. Better than its counterpart at Nemecek’s near Abbott on IH 35.

Best Cactus
Pitaya. Tastes like strawberry and will keep you alive when marooned in Big Bend.

Best Place to Die
The Alamo.

Best is Yet to Come We Hope
Dolph Briscoe, Uvalde.

Best Rich Woman
Aunt Susie Slaughter, Fort Worth. Personally handed Fort Worth Mayor Clif Overcash a check for $92,000 to buy a new fire truck. Also, Aunt Susie is shelling out the bucks for the Opera House in Grapevine.

Best Explanation of Why Texas History is Not a Major Academic Discipline
Battle of the Alamo painting in the Alamo museum. It’s from the movie, not the real event. Features John Wayne as Davy Crockett, Richard Widmark as Bowie, and Laurence Harvey as Travis.

Best Rotating Sign
Terminix Termite, Austin. Six- foot-long spinning insect whose red eyes light up and blink at night. Thousands of collegians have tried to steal it, and it’s rumored the Japanese want it for a sci-fi film.

Best Doomed Settlement
Brownwood Subdivision, Baytown, in the heart of Houston’s subsidence zone. Visit it quick, and at low tide. It’s sunk eight feet in thirty years and will soon be under water.

Best Country Club
Brook Hollow, Dallas. Hidden away in a tacky part of Dallas, Brook Hollow for 56 years has been the well-run hideaway for Dallas’ elite.

Best Bargain
Nickel Coca-Cola machine at Jamail’s Grocery, Kirby Drive, Houston. If you don’t like Coke, take your nickel to Mama’s Hamburgers on Me­morial Drive in Houston for five cents’ worth of toetapping music.

Best Auto Mechanic
Burney Russell, Fort Worth. He taps, listens, pokes, ana­lyzes, and then fixes it right the first time. 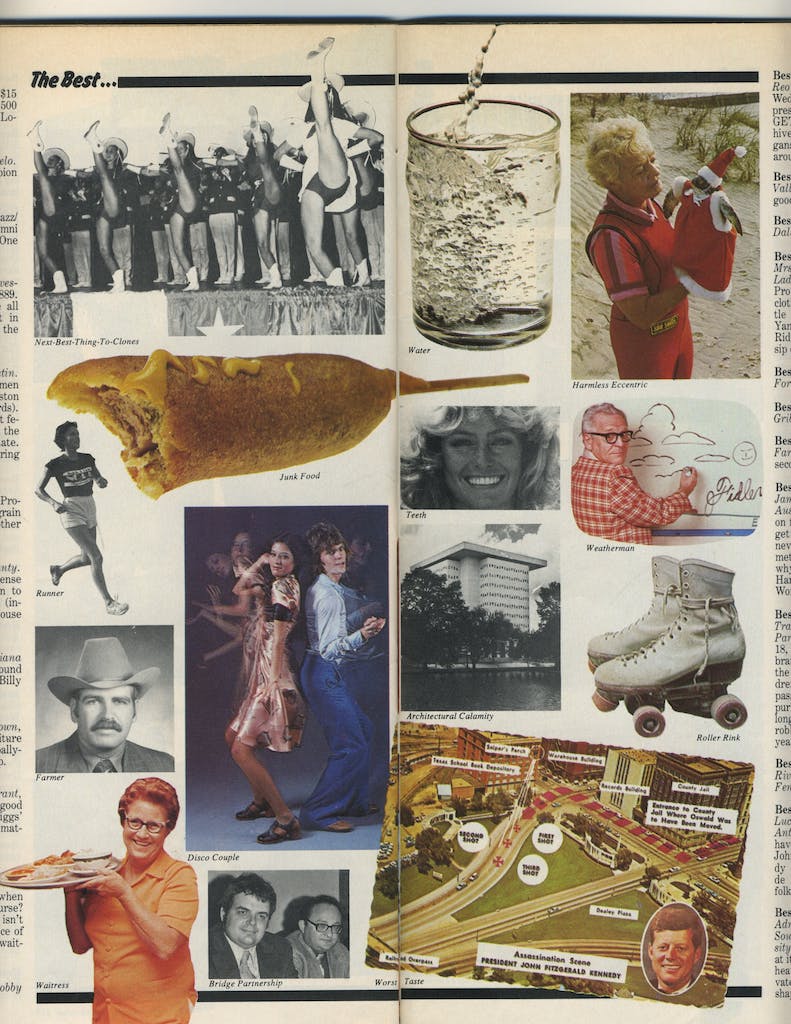 Best Unknown Restaurant
Sallie’s, Houston. This steak and salad place is listed in the phone book under its address, there’s no sign, and we’re not about to tell you where it is. All we’ll say is take the Broadway exit off the Gulf Freeway, then you’re on your own.

Best Next-Best-Thing-To-Clones
Kilgore Rangerettes, Kilgore. “I thank the thang teaches you to thank,” replied a Rangerette when asked why she was a member.

Best Daily Newspaper
Does Not Apply.

Best Ice Cream
Purity Ice Cream Co., Galves­ton. Manufacturing since 1889. Their eighteen flavors are all made with cream brought in from Lufkin. Vanilla is the best-seller.

Best White Elephant
Flower Mound New Town, Dallas. After an expenditure of $18 million, the much-ballyhooed development is a flop.

Best Waitress
Doris Hedgepeth, John’s Oyster Resort, Galveston. How does she know when it’s time for the second course? Not afraid to warn what isn’t good that day. Quintessence of everything most Texas wait­resses are not.

Best Dance Hall
Reo Palm Isle, Longview. On Wednesday afternoons the pressure cooker set is ready to GET DOWN! A forest of bee­hives, white shoes, and brogans, all looking to mess around before suppertime.

Best Water
Valley Mills. It’s clear, tastes good, and what else is there?

Best Teeth
Farrah Fawcett. There is no second place.

Best Crime
Train Robbery, Braekenridge Park, San Antonio. On July 18, 1970, two servicemen brandishing revolvers held up the Braekenridge Park chil­dren’s train. They robbed the 75 passengers of over $500 and purloined many personal be­longings. It was the first train robbery in the Wild West in 47 years.

Best Newspaper Slogan
Wink Bulletin. “The only newspaper in the world that cares anything about Wink.” Amen.

Best Aggie Joke
An Aggie and a woman he met in a bar are checking into a hotel. He writes “X” on the register, ponders for a mo­ment, then draws a circle around the X. “Why’d you do that?” the desk clerk asks. “When I’m running around with strange women,” the Aggie says, “I never use my right name.”

Best Gambler
Johnny Moss, Odessa. Lost the World Series of Poker this year but still a legend in his own time. Once ran a $1000 stake into half a million just in time to pay a gambling debt and stave off a waiting hit man.

Best Hatter
Manny Gammage, Texas Hatters, Austin and Houston. Whether you are Willie Nelson’s roadie or a pointy-headed intellectual, Manny will make and shape what fits you. Beaver is our favorite. 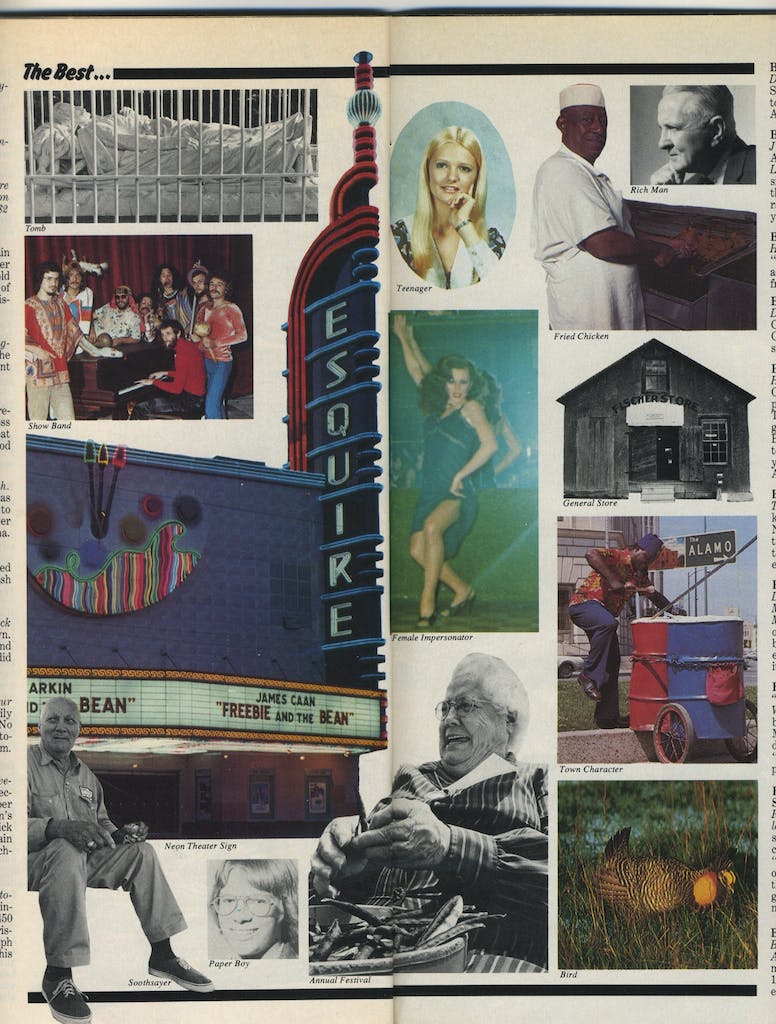 Best Mexican Food
Julio’s Cafe Corona, Juarez. Matchless stuff. The best dish is entomatados de gallina with sour cream. On this side of the border try the Old Borunda Cafe in Marfa.

Best Climate
Kerrville. The runaway choice in a meager field.

Best Waterfall
Capote Falls, Presidio County. The state’s highest, 150 feet. Not on the way to anywhere (except Capote Falls) and on private property.

Best Corporate Maneuver
The acquisition of 88 square blocks of downtown Houston by Texas Eastern for the $2 billion Houston Center.

Best Chinese Restaurant
Hunan, Austin. Despite plain decor and so-so service, owner Frank Yi’s spicy food can hold its own with the standards of New York’s and San Francis­co’s Chinatowns.

Best Soothsayer
Mighty Red Chadwick, Long­view. Would you argue with the man who advised H. L. Hunt on oil in the Thirties?

Best Old Coot
Evetts Haley, Amarillo. Author of A Texan Looks at Lyndon as well as a controver­sial volume of Texana back in the Twenties. Haley’s been raising hell for more than 50 years.

Best Female Impersonator
David, d.b.a. Roxy, Austin. Catch Roxy’s act at Austin Country or at one of his/her stops around the state.

Best Lay
The Bomber, Austin. This tur­key hen, owned by Janes-Bar-Nothing turkey ranch in Austin, set a world’s record in 1947 that still stands: she laid 234 eggs in one year.

Best TV Ad Personality
“Wide Track,” Irving and Fort Worth. After a sales pitch by brothers Bill and David McDavid for their two Pontiac dealerships, their Great Dane “Wide Track” woofs his approval.

Best Reason Why There Are So Many Perennial Students
Richland Junior College, Dal­las. The school’s community service department offered a course last summer called “How to Handicap the Thor­oughbreds,” despite the facts that pari-mutuel betting is ille­gal and thoroughbred racing nonexistent in Texas.

Best Rich Man
R. Parten, Madisonville. Most civilized Texan. Last voice of reason to serve on UT Board of Regents (’35-’41).

Best Golf Hole
Colonial Country Club, Fort Worth. The fifth is one of the great golfing tests in America, a 466-yard par-four dogleg around the Trinity River.

Best Campaign Slogan
Betty Andujar, Fort Worth. Defeated Gus Mutscher supporter Mike Moncrief for a State Senate seat after the 1971 Sharpstown Scandal with the slogan, “Why fire the ventriloquist and keep the dummy?”

Best Bridge
Rainbow Bridge, State High­way 87, Port Arthur. The 230-foot-high span over the Neches is the highest in the South.

Best Bicentennial Excess
Lewisville. The city fathers propose to “establish the first inland Bicentennial navy to help emphasize the important contributions the navy has made to the freedom of our country.” Landlocked Lewis­ville is 21 miles north of Dallas.

Best Town Character
Bongo Joe, San Antonio. Joe plays his two 50-pound Texaco oil drums on the Riverwalk. If you can hum it, Joe can play it.