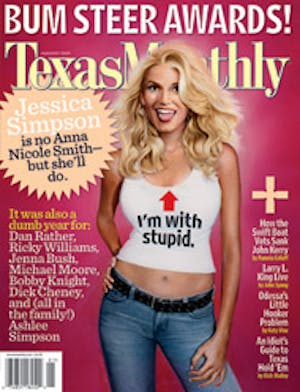 The film was as big a disaster for Disney as the 1836 battle was for its valiant defenders—a commercial and critical flop that, unlike the original, is better forgotten.

They lost twice at the College World Series: once on the field to Cal State—Fullerton, then in the clubhouse afterward by stiffing the post-game awards ceremony because coach Augie Garrido thought attendance was optional.

An estimated two thousand people came out for a special showing of his Fahrenheit 9/11 in Crawford, the Texas home of George W. Bush, after he announced he’d be there, but the documentary filmmaker was a no-show.

The coach who was going to get America’s Team back to the Super Bowl was all hat and no Cowboys, calling his players “stupid” as they stumbled through a losing streak.

The owner of the Dallas Mavericks threw up an air ball when his reality series, The Benefactor, was ABC’s lowest-rated show and was canceled by the network after only six episodes.

They put on a mighty fine performance at halftime during the Super Bowl at Houston’s Reliant Stadium: a $550,000 fine, to be exact, leveled by the FCC against twenty CBS-owned affiliates, after he tore off part of her costume, exposing her right breast.

The Longhorn legend chose pot over pigskin, quitting the Miami Dolphins. Comparing his favorite drug with an anti-depressant he formerly endorsed, he said, “Marijuana is ten times better for me than Paxil.”

In the wake of his much-criticized 60 Minutes report on George W. Bush’s military service, he announced he’ll step down as anchor of the CBS Evening News in March.

Viewers of Saturday Night Live heard Jessica’s little sister singing “Pieces of Me,” but onscreen her lips were closed. Later, on her Web site, she blamed the lip-synching mistake on her problems with, as she wrote, “acid refux.” Well, everybody refux up sometime.

The pop diva and reality TV star, raised in Richardson, repeatedly denied she’s dumb but proved otherwise: When she was introduced to Secretary of the Interior Gale Norton, she said, “You’ve done a nice job decorating the White House.” With Jessica, it’s the exterior that counts.