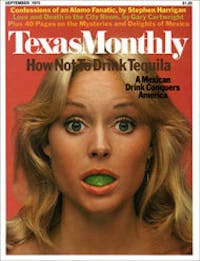 Before the Spanish, Mexico was Indian. Almost five centuries later, some tribes still remain. A people less hardy than the Huichols might find the Sierra Madre inhospitable. Because water is scarce on the plateaus, the Indians inhabit the can­yons. So rugged is the terrain that a day’s journey may cover only a few miles. Yet the Huichols thrive. In 1971, when these photographs were taken, the Indians were efficiently integrating such pinnacles of urban civilization as portable radios and bottled grain alcohol into their ancient culture.

On this page two young “sisters” (cousins by our kinship terms) wear clothes of traditional design made from fabric purchased in a modern market.

A red plastic radio takes on a surreal aspect in the barren landscape cleared for a tiny school and other government facilities. The teenage girl cooks for the teacher and fifteen children who attend the school.

At dawn a shaman, or curer, concludes a night of religious chants inquiring into the luck of a forthcoming deer hunt. He holds prayer feathers, for gathering power, and a mirror, for divination. His wife is also a shaman, al­though she did not participate in this ritual. She, as do all the wives of the village, embroidered the figures on her husband’s garments; each figure has special sig­nificance.