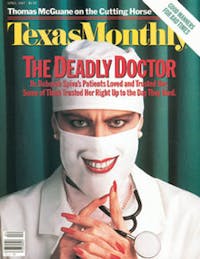 Few weather events equal the flash flood in excitement. The very phrase sounds dangerous, conjuring visions of torrential rain that quickly transforms front yards into lakes and quiet streets into raging rivers and threatens to sweep the whole neighborhood into the Gulf of Mexico. One minute the sun is shining, the birds are singing, and the brook is babbling; the next, the sky darkens, the rain begins, and it’s time to batten down the hatch. Little white lines of type float across the bottom of the TV screen, and an intrusive beeping sound announces the potential for flash flooding—a watch is declared if flooding is imminent or already occurring in the vicinity. Either way, it’s time for constant vigilance, for no event wreaks havoc quite so quickly or thoroughly as the flash flood.

Although Texas is a land of contrasts, you usually have to drive a thousand miles to discover that fact. A flash flood can save you the mileage. Within hours, drought can turn to flood. The rains that fell over the Hill Country on August 2, 1978, for example, broke a severe six-week dry spell by dumping more than twenty inches of precipitation in the headwaters of the Guadalupe, Medina, and Sabinal rivers in a few hours, causing record flow rates and numerous deaths.

If Texas seems to get more than its share of flash floods, that’s because its location between the Rocky Mountains and the Gulf attracts both rain-laden cold fronts from Canada and warm, moist air from the south. As such systems stall and dissipate over Texas, they drop intense rains over small areas. In 1921 a rainstorm moved north from Mexico before becoming stationary over Central Texas. On September 9 the system set a U.S. record by unleashing 36 inches of rain in eighteen hours on the farming community of Thrall. The flash floods spawned in the area killed 215 people.

The sparsely vegetated limestone terrain of the Hill Country and Edwards Plateau is especially prone to flash floods, as is evidenced by the numerous low-water-crossing signs and flood gauges posted along normally idyllic shallow rivers, streams, and dry washes. Add a thin layer of saturated topsoil and miles of pavement, and you have the ingredients for a full-blown gully washer or frog drowner.

Every Texan worth his barometer understands that the flash flood’s inherent danger is its potential to strike almost any rivulet anytime. You expect the Mississippi to spill its banks on a semiregular basis. A creek that you normally ford in one giant step doesn’t command that kind of respect until it rains and rains some more. How many times have otherwise sensible people hopped in their cars to see which bridges have washed out instead of staying home as the weatherman advised? Low-water crossings mark the graves of many foolhardy souls unaccustomed to the vagaries of Texas weather. “I can make it” are the famous last words of tinhorns before they gun the engine and try to plow through a raging torrent. “A lot of newcomers are lost in Volkswagens that way,” says meteorologist James C. Fidler.

Then there are those who understand the risks but nonetheless regard flash floods as sport. When desert rats in the Big Bend spot a heavy thunderstorm in the distance, they consult a set of topographical maps, calculate the direction of the runoff, and head for a dry wash. If their predictions are correct, they are rewarded with an ominous rumble that heralds a flash flood’s arrival. They compare the spectacle of water barreling through the wash and crumbling banks along its way to the calving of glaciers.

My respect for flash floods was instilled on Memorial Day weekend, 1981, when seven inches of rain fell on already saturated ground in Austin. Shoal Creek jumped its banks and threatened to flood my downtown office. Before I could reach the place, my car was met by a rush of water and began to float away. I jumped out, took refuge on the second floor of the building, and watched as the water carried several cars, the garage, and the back stairway toward Town Lake. As quickly as four feet of water had entered the building, it retreated, leaving a thick layer of mud as a calling card. By the time a rescue boat puttered to the front porch, I could slosh through the muck unassisted. Thirteen lives were claimed by the waters that night. I got out easy, losing only my record collection and a few sundry possessions, but I experienced a brush with death that I will never forget.