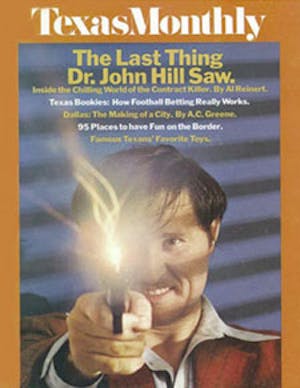 DURING THE LATE SUMMER OF our recent stock market discontent, a strange phenomenon occurred in world security and commodity markets: the price of gold, the value of the dollar, and securities prices all declined in unison.

This heretical occurrence is much like stock prices and the prime rate going up together. Gold is supposed to be an absolute hedge against a declining dollar and falling securities and is supposed to work in orchestrated apposition to them. But the decline in the price of gold from more than $120 an ounce back to par didn’t faze the gold bugs who will quickly determine that a 10 per cent decline in IBM presages an imminent disaster.

Encouraged by a stock market as unrewarding as being a pro football fan in Houston, more and more investors are embracing the idea that the sky’s the limit for gold. “Buy high and sell higher” becomes “buy high and never sell,” the cry of the gold bug.

Many American investors are catching gold fever, a disease more easy to contract than to cure, from their European cousins who have long been convinced that no paper currency is worth more than the cost of an additional printing press. Europeans have been converting their paper currency to gold and hoarding it for centuries.

The Cassandras of international monetary doom saying have abetted the tendency to buy gold by predicting worldwide recession for many years. The advance in the price of the gold has vindicated them somewhat, and gold has been picking up some unlikely riders on its bandwagon as it climbs.

The investing housewife no longer calls her broker to inquire about the price of Houston Lighting and Power.

“What’s London Gold at the afternoon fixing?” she asks. “And how about American South African?”

And they call in to buy shares in gold mining companies in Africa, the kaffirs, companies whose names investors can’t pronounce and whose local politics are as stable as a mountain ram in rutting season: Blyvoor, Kloof, West Dreifontein. Never mind the politics, the interest equalization tax, nationalization threats or anything else. They mine gold, don’t they?

So far the major beneficiaries of the boom in gold have been deposed South American dictators, Middle Eastern potentates, and the gnomes of Zurich.

Rumor is that $1.5 billion worth of gold has been cashed by Juan Peron in the past few months to finance his return to power in Argentina. One wonders if that’s all the Argentine leader was able to spirit out of his country when he ran for Spain a few years ago. Even if that’s the bundle, the logistics are staggering. Even at $150 an ounce, that’s more than 300 tons of gold. If there is that much of the stuff in the possession of just one man, why is there a shortage?

But there must be a shortage, because the price is going up. The oil rich sheiks of the Middle East don’t care for dollars. As soon as we deliver a bale of dollars to them in return for their oil, they rush to Zurich or London or Paris to convert their dollars to gold, prompting gold bugs the world over to Greek chorus: “You see, the dollar’s weak and gold is strong.”

Any day now the Arabs are going to present a new demand: No more oil except for gold. The cunning Arab knows how to cut out the middleman.

That will be bad news for the gnomes of Zurich. They’ve made more money out of trading gold than owning it. Gold is like a lot of commodities in that no one ever takes delivery of it. It’s like the novice commodity trader who neglected to cover his long positions in one contract each of sugar and cocoa. He had to take delivery of 30,000 pounds of cocoa and 112,000 pounds of sugar and store them in his garage, which caught fire and burned to the ground, leaving him with the world’s largest brownie.

Gold has to go up in value. If it stays flat, the owner loses money through insurance, storage, and interest costs. The gnomes make it as easy and as expensive as possible for gold bugs to scratch their Midas itch. There is no telling how many numbered accounts there are in Switzerland holding gold for John Doe, U.S. citizen. After all, you can’t put your gold under the mattress. The U.S. dollar, no matter how weak, is infinitely more comfortable.

Another caveat for gold bugs: that precious metal with eons of history as a cause of alarums and wars throughout the world is, after all, a commodity affected by the currents of supply and demand. There are an awful lot of gold mines, even here in the U.S., that weren’t worth working when gold was $35 an ounce, but now that gold is over par, some of the rusted nails holding “Closed” signs over mine entrances may yield to the crowbar of demand.

Who knows how much unmined gold there is in the rest of the world? DeBeers controls only diamonds. Behind the iron curtain there may be legions of Russian 49’ers with pickaxes and shovels being led into the foothills by a commissar, who shouts, “There’s gold in them thar Urals!” And no one knows what’s going on in China. Could it be that the rest of the world is about to find out the true meaning of “yellow peril”?

As long as investors worship at the foot of a graven image fashioned of gold, we are courting monetary disaster. Economists warn that to limit world trade to that which can be justified by each trading nation’s supply of gold would reduce international commerce to a trickle. Some have wondered to whom France would have sold all that bad grape had DeGaulle been successful in cornering gold.

Actually, U.S. gold supplies are not completely depleted. There are still a few tons of it in Fort Knox, and only the most rabid anti-American gold bug believes that our gold hasn’t appreciated along with that of the rest of the world. Some politicians advocate selling our gold while it is up in order to bring all those wandering Eurodollars home.

We could certainly repatriate a lot of them if we did sell our gold and thereby remove a nagging irritant in our commercial relationships with our trading partners. Perhaps we should do just that and then announce to the world we would sell all the wheat, soybeans, cotton, etc. foreign countries seem to need so desperately, but only for gold.

Our inflation, as severe as it is, is less than that of any of our major trading partners. We seem to be the only country in the world that can produce more food than we consume. Would the gnome of Zurich rather have a ton of gold or one American farmer if stranded on a desert island? Our propensity for giving dollars away faster than we can earn them has waned somewhat as we have had to put more patches on the tail of the tiger. And our international competitiveness in both quality and price is improving. Few oenophiles would prefer the vin ordinaire du pays over Hearty Burgundy.

But gold knows no master of lagic or fact, imbued as it is with the mysticality of a metal too soft for armor but unparalleled for encircling the third finger. Gold has broken out!

The last devaluation of the dollar made gold officially worth more than $42 an ounce. Unofficially, the price has more than tripled from the old $35 an ounce peg that lasted between Roosevelt and Nixon. Gold’s advance to more than $100 an ounce has caused consternation among manufacturers of high school rings, dismay among dental patients, and hysterical glee among gold bugs.

Into this confusion gallops congress to rectify the mistakes of the past. For many years it has been illegal for U.S. citizens to own gold, but congress has passed and sent to the president a bill to allow U.S. citizens to come out of the closet and be legitimate gold bugs. Soon we will be able to buy a gold ingot instead of 100 shares of Homestake Mining. What our government prevented us from buying at $35 an ounce we are to be allowed to purchase at $100 an ounce.

But before investors rush out to join the gold bugs and bet the blackland farm on even higher prices for gold, they should remember what Baron Rothschild reputedly said when asked if he had anyone in his organization who understood gold. He said:

“Yes, there’s a junior executive in my Paris office and a janitor in my London office. They both understand it perfectly. Of course, they don’t agree.”