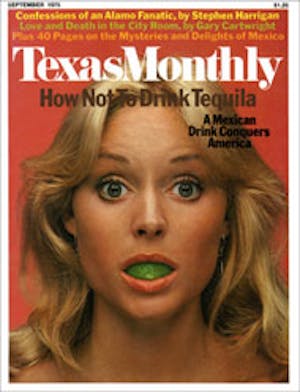 So you’re traveling south of the border? Chances are better than one out of four that sometime during your visit you’ll be hit by turista. Call it what you will—Montezuma’s revenge, Delhi belly, Mexican two-step, or Casa­blanca crud—but there’s no guaranteed way to protect against it and no certain cure for it. Almost everyone knows the precautions: don’t drink the water, and avoid salads, raw vege­tables, and unpeelable fruit. Still, some people can throw caution to the wind and stay healthy while others seem to be hit every time.

Those lousy odds didn’t just come out of a hat. A team of doctors followed a group of American students for eighteen days in Mexico City last year, and found that 38 of 133 (29 per cent) developed diarrhea during their stay. Of these, 21 cases were mild (only one episode, lasting one to three days), 9 were moderate (two or three separate attacks), and 8 were severe (repeated attacks, plus nausea, cramps, and weight loss). A half-dozen similar studies of North Americans visiting Mexico have come up with virtually the same findings: approxi­mately one-fourth to one-third of the visitors suffer at least one episode of turista.

So forewarned you are. But forearmed? That’s not so easy. Pills and other medicines which claim to relieve or even cure turista may produce temporary relief, but often they end up prolonging discomfort. At least that’s the opinion of Dr. Herbert Dupont, professor and director of infectious diseases and clinical mi­crobiology at the University of Texas Medical School in Houston.

“Americans are too drug oriented,” he says. “They feel they have to take something, and as a result they often end up counteracting the body’s natural protective mechanism. Most of the time it would be better to let nature take its course.”

Narcotic analgesics such as Lomotil or paregoric may make you feel better temporarily, Dupont says, but in the long run they may be self-defeating. Since they slow up muscular contrac­tions which normally propel matter along the lower bowel, they keep infec­tious germs from being flushed out of the system. His advice: don’t take any pills and leave your body alone. Less stringent advice comes from Dr. Sher­wood Gorbach, one of the doctors who studied the American students in 1974. He recommends Lomotil for combating cramps—but only for one day. If your condition hasn’t improved after taking six to ten tablets over a 24-hour period, you should quit. Children especially should not be treated with drugs: six Lomotil tablets swallowed by a two-year-old can cause respiratory failure.

Over-the-counter drugs like Kaopectate apparently are of little benefit. About their only usefulness is that they help adults observe the social ameni­ties—they cut down on trips to the john. They also appear to cut down on fluid loss, but this “cure” is only illusory; the medicine actually forms clay-like lumps which absorb the fluid. Other symptoms like fever and discomfort are unaffected. The federal Food and Drag Administra­tion will prohibit the sale of all non­prescription antidiarrheals by the fall of 1976 unless drug companies can dem­onstrate their effectiveness.

Narcotic analgesics aren’t the only medicines you should leave at home, the experts say. Antibiotics should also be avoided, for they interfere with the body’s natural protective mechanisms by knocking out intestinal organisms which normally release fatty acids—themselves antibiotic agents.

So what’s left for sick folks to do as they lie prostrate while their luckier friends down margaritas and huevos rancheros with nary a twinge? Most important is to replace fluid loss by drinking bouillon, canned fruit juice, weak tea with sugar, or carbonated drinks (partially de-fizz them by shak­ing). But remember—drink only boiled, treated, or bottled water. Be sure the top is sealed if you’re uncertain about the source of the so-called agua purificada. More than one visitor has discovered that the bottles were being filled di­rectly from the tap, and although the Mexican government has put strict standards on water purity since 1965, caution is still advised. Watch out espe­cially for the ice in your drinks, which is no purer than the water it’s made with.

Doctors say the loss of sodium and potassium from turista is what makes you feel so wretched. Dupont suggests that patients with muscle and kidney diseases who are particularly prone to complications arising from this loss might think twice before traveling to any tropical or subtropical country where hygiene standards are not top-notch. The other vulnerable populations are the very young, the very old (both of whom have little stomach acid), or pa­tients who have had stomach surgery, such as an operation for peptic ulcers. These people no longer have the cleans­ing, even sterilizing, acids found in the normal stomach. The only documented cases of death from turista have been in these high-risk people.

Back to the subject of treatment. To keep your body electrolytes in balance, add a pinch of salt to your drinks to replace depleted sodium, and eat bana­nas, which are high in potassium. Don’t drink milk. Diarrhea results in the loss of lactose, the enzyme needed to break down and absorb milk.

But don’t let all this talk spoil your trip. “Don’t overemphasize the serious­ness of turista,” urges Sherwood Gor­bach. “It rarely lasts more than a day or two and it’s not life threatening… just an inconvenience.”