Houston’s short nightmare is over: the Houston Astros shall remain the Houston Astros. One week after refusing to rule out the possibility that the team might change its name upon moving to the American League in 2013, owner Jim Crane emailed Astros season ticketholders this video:

“One thing we’re not going to change is the name,” Crane said. “We’ve received strong feedback and consensus among season ticketholders and many fans, and we will not be changing the name Astros…”>

As Zachary Levine of the Houston Chronicle wrote:

The Astros got about one minute of fame in a quiet offseason as national talk shows pondered new names and a return to the Colt .45s, abandoned in favor of the Astros in 1965. However, local reaction was not favorable. In a non-scientific Chronicle poll, 81 percent of readers were against a change in name.

An amusingly well-lathered fan website, Save the Astros Name (“dedicated to making sure that Jim Crane doesn’t make Ken Caminiti cry tears in Heaven”) couldn’t even gain momentum (its petition was signed by just thirteen people) before being able to claim victory.

On Astros name: I see how we the media might have been played. Also recognize that every outlet playing it big is a Nash equilibrium point.

Someone is either working on in-depth profile of Astros director of decision sciences Sig Mejdal, or he really, really likes A Beautiful Mind.)

But that was the genius of Crane’s move—not only did the Astros get free market research and a ton of no-such-thing-as-bad publicity, but the media (TM Daily Post included) was more than happy to share in the readership and clicks. MLB.com columnist Richard Justice even got to take a break from writing about Prince Fielder to cover the team and city he loves most (he’s still out of luck on college football though). 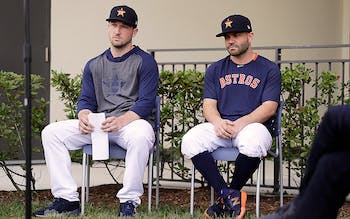