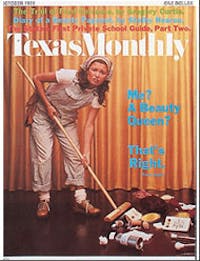 Columbus, Dr. Jonas Salk, Thomas Edison, and Edwin Land (of Polaroid) were all pioneers in their fields. And to them in varying de­grees have gone the honors and rewards for men who push beyond the edge of existing knowledge into the world of the unknown. There is one man of this breed, however, who until now has not received his full ration of honors. For many of us—at least during certain periods of the day—his discovery ranks in the same class with those of other better-known men.

In 1951, only 5449 gallons of tequila were imported from Mexico into the United States. Last year, according to industry sources, more than 2.8 million gallons poured in, with the major mar­ket west of the Mississippi. From a two- fisted drink taken straight with various combinations of lemon, lime, and salt standing by, this clear beverage made from the agave, a cactus-like plant, has become the ingredient of cocktails rang­ing from the Tequila Sunrise to the Guerrilla Sweat.

What made tequila’s success, how­ever, was the Margarita, a light, icy drink made with tequila, cointreau, and lime, and drunk from a glass with its lip rimmed in salt. Like sliced bread and toothpaste, the Margarita seems always to have been with us. But not so. The inventor, one of the great bartenders along the border, still lives, only today he drives (yes) a milk truck.

Pancho Morales, 56, who has driven a truck for Price’s Creameries in El Paso for the last eighteen years, says he in­vented the Margarita in the summer of 1942 at Tommy’s Place (now a curio shop) on Juarez Avenue. He also in­vented the Conga Cooler.

Before immigrating to the United States in 1945, Morales was a Juarez bartender for 21 years. “He was the best in Juarez, and in all of Mexico,” says a former co-worker who confirmed Morales’ invention. Morales also taught the union’s bartenders’ school in Juarez.

In the “old days” along Juarez Ave­nue during World War II and the swashbuckling years of a lost genera­tion, soldiers training at Fort Bliss drift­ed through Juarez, as did a crowd of Hemingway-style drinkers who played hard, living by the day as war mounted. Morales was head bartender at Tom­my’s. He used to create drinks for his customers, and signs over the bar would regularly promote new concoctions such as the “P-38,” “B-29,” and the “Conga Cooler.”

“I had signs for all my mixed drinks,” said Morales at his pleasant suburban El Paso home, his wife Mar­garita at his side, his three children looking on as he leafed through old photographs and clippings. “Customers would come in and I’d say, ‘Well, Mr. Cooper, you like mixed drinks? Well, I’ll make you a Cooper Special and if you like it, then you order another one.’ Maybe when I mix three or four, when you came back the next day, I would remember. Many drinks like this hit the spot,” said Morales. “You see, we kept making these signs.”

He remembers when the Margarita came to life.

“Exactly, it was one Fourth of July. That Fourth of July, everybody came to Tommy’s Place… well, not every­body, but a lot of people.

“A lady came in and said, ‘Let me have a Magnolia.’

“Well, the bartender, same as cooks and artists… the bartender has a lot of pride. We have too much pride to say, ‘Well, I’m sorry … I don’t know how to make that drink.’”

Morales knew, roughly, that a Mag­nolia contained cointreau, some lime, and booze. To save face, he faked it and made it with tequila.

“I gave it to her and she says, ‘Oh, this is not a Magnolia, but it is very good.’ And, I said, ‘Oh, oh, I thought you said Margarita.’ You see, daisy, in Spanish, is margarita. The reason I called it the Margarita is because I was thinking of the flower margarita, like the magnolia. She liked it. That’s how it originated.

“Pretty soon she ordered another one and someone said, ‘Hey, what’s that?’

“Then I start to put the salt, but not the way that these bartenders do now. Now they get a dish full of salt, they rub the lime, and they stick the glass in the dish… they put too much salt. The idea is to get the three-ounce glass and rub it, then take the salt shaker and you twirl it around and shake the salt on the outside of the rim… I always teach them that.”

His original recipe for the Margarita (recorded on a stack of old bar tabs with the preprinted date of “_____, 194__”) goes: juice of one lime, 4/5 tequila, 1/5 cointreau, salt outside rim of three-ounce glass.

“It is better with 2/3 tequila, 1/3 cointreau now,” he said, since 1942 cointreau was a much heavier tasting liquor than the current Mexican and American-made brands.

Morales’ account may at first appear at odds with the most popular story about the invention of the Margarita, a story nurtured by the advertising depart­ments of California liquor traders, and by Heublein, Inc., the people who brought us—among other things—the Brass Monkey. As the story goes, Vern Underwood, the undisputed pioneer of tequila distribution and evolution in the United States, was trying to push his exclusive import rights to the Jose Cuer­vo brand in California. He was having a hard time selling the spirit because of its hard-drinking, macho image. Young’s Market Company in Los Angeles, a company Underwood went on to be­come president of, was in trouble. Just about then, a La Cienega row restaurant named The Tail O’ The Cock started ordering five cases of tequila at a time.

According to a PR-oriented “Heublein Tequila Paper” (undated): “On in­vestigation, Underwood found that the restaurant’s head bartender had invent­ed a new drink using Jose Cuervo Te­quila, called the Margarita, which was rapidly winning acclaim by word-of-mouth. This was exactly what tequila’s importers had been looking for… a fresh handle.”

The restaurant’s head bartender was named Johnny Durlesser. As a report in Bon Appetit magazine notes, Durles­ser “was asked to duplicate a drink a lady customer had once tasted in Mexi­co.” He put together a drink which pleased the lady (who, naturally, was named Margaret) and that’s how the tequila push started for the Cuervo brand.

Vern Underwood is still with Young’s Market in Los Angeles. He maintains that Young’s Market “started bringing Cuervo Tequila in in 1942 and it was about ’53 or ’54 that we had the Mar­garita cocktail.” Had Durlesser invented it before then? “Not very much before then, and actually no name had been given to it. We named it. They were serving a tequila drink at The Tail O’ The Cock, but really it was more or less nameless. We and the owner of the res­taurant named it the Margarita.”

Thus, although later pioneers may also have duplicated the discovery, the Margarita was invented in 1942 by a Mexican, now Mexican-American, named Francisco Morales. It was named after a flower, not a girl—though people joke about it being named after Fran­cisco’s wife, whom he married in 1956.

Southern California, though, made it famous. “The Conga Cooler was more famous than the Margarita at Tom­my’s,” Morales admits.

Credit, however, is really not that im­portant now to Morales. He likes his job as a milkman. “When it comes to ‘The Best Milkman In Texas,’ then you come see me,” he says, excusing himself, as he had to get up at 2:30 a.m. to start daily deliveries.

His favorite drink, by the way, is Scotch and water.

He didn’t have anything to do with its invention.

On the theory (proved above) that great bartenders often go unrecognized in their time, we have found some other great bartenders who ply their trade in cool places around the state. We were assisted in our effort by Nannette Simp­son, Bill Records, Eden Van Zandt, Teddy Vannoy, Thorne Dreyer, Brad Cooper, and Anne Cain. And while a bartender’s skill at inventing concoc­tions may bring him the lasting grati­tude of more adventurous drinkers, it is his ability to make the basic drinks which proves his mettle. These bar­tenders can do both. Cheers.