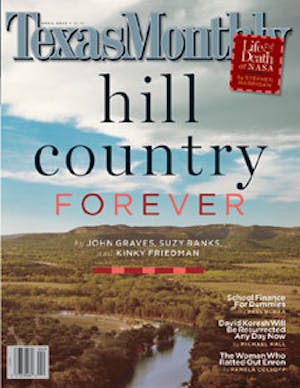 NINE YEARS AFTER HIS UNTIMELY death from cancer at the age of 65, Donald Judd has never been more fascinating. After moving to West Texas as a newly minted international icon in 1972, Judd spent the last two decades of his life creating the dazzlingly edgy personal art park and museum complex that sprawls over 340 acres of downtown Marfa and its environs. He has since achieved cultural canonization, drawing upward of 10,000 art pilgrims annually to his remote shrine, now called the Chinati Foundation. With the cult of Judd in full bloom (manifestations include WWDJD—What Would Don Judd Do?—bumper stickers), parsing his life, writings, and art has become a small industry, inspired not only by an increasing awareness of the profundity of his work but also by the intriguing enigma of the man himself. Publicly cranky and diffident yet privately charming, a no-nonsense Midwestern pragmatist driven by an almost mystical vision, Judd—and his art—bristled with contradictions. He was an artist whose works can be measured in tons and acres who nevertheless remained a painter at heart, a cultural populist who could realize his vision only in one of the nation’s most sparsely populated outposts, an ardent secularist who created one of the twentieth century’s most spiritually resonant works of art. For the growing legions of the faithful, divining the true essence of Judd and his work has become an issue as urgent as defining the nature of the Trinity was to the Council of Nicaea.

Fortunately, much illumination will be shed by “Donald Judd: Early Work 1955-1968,” an exhibit co-organized by Houston’s Menil Collection and on view there through April 27. (Much of Judd’s multimillion-dollar Marfa project was financed by Philippa de Menil, a daughter of the museum’s late founders, John and Dominique de Menil.) The question asked—and to a satisfying extent answered—by this austere yet ravishing little show is: How did Judd get from a generic art-school nude he painted in 1950, when he was a 22-year-old tyro at New York’s Art Students League, to the Stonehenge-like concrete megaliths and warehouses full of shimmering aluminum boxes that have made Marfa the mecca of Minimalism?

Like Jackson Pollock, the Wyoming native he succeeded as the point man for Modern art, Judd was a provincial; born in Excelsior Springs, Missouri, in 1928, he hopscotched through the Midwest with his family (his father worked for Western Union Telegraph) before settling down to finish high school in suburban New Jersey. While studying painting and drawing at the Art Students League, Judd also attended Columbia University, earning a bachelor of science degree in philosophy.

Judd’s first decade as an artist, summarized by a small gallery full of drawings and oil paintings from 1950 through 1958, was pedestrian if not plodding. In two small-scale, untitled views of trees on a New York street from the mid-fifties, the forms of the trunks and foliage have become more blocklike in the later painting, a progression similar to Piet Mondrian’s increasingly geometric trees of the early 1910’s. Welfare Island (1956), a more severely abstracted landscape, introduced a style that varied little over the next four years: natural and man-made features pared to elegantly drawn geometric forms, painted with a deftly handled but hardly original palette dominated by grays and subtle greens and blues. What’s most striking about these early paintings is a sense that Judd was entirely contented with their middle-of-the-road aesthetics and risk-free execution.

But a storm of innovation was brewing beneath this placid surface. Judd went back to Columbia in 1957 to work on a master’s degree in art history, his studies ranging from ancient Egypt and Mexico through Renaissance Venice and Modernism. In 1959 he became a critic for Arts magazine, his blunt, uncompromising opinions reflecting his increasingly well-informed outlook. Evidently Judd also took his own work to task; an untitled 1960 canvas, featuring a few looping white lines on a glaring yellow field, seems startlingly confrontational next to its timid antecedents. Like a handful of the most advanced painters of his generation, Judd had begun to struggle with the radically simplified compositions of Abstract Expressionists like Pollock and Barnett Newman, dense, undifferentiated skeins of paint or flat fields of color that seemed to have finally eliminated any vestige of representation. The problem, as Judd saw it, was assimilating the breakthroughs of Pollock’s generation without “doing it again.” One solution was to assert even more baldly the physical reality of a painting’s surface; in an untitled 1961 piece, Judd recessed an aluminum baking pan exactly in the middle of a large, heavily textured black painting, a pun, wittingly or not, on the traditional Renaissance “window into space” as well as an implicit edict that any penetration of the surface should be the real deal, not an artful or even unintentional illusion of space.

In scooping out space with a baking tin, Judd embarked on his lifelong exploration of a medium he described as “neither painting nor sculpture.” An untitled 1962 floor piece consists of two wooden rectangles, painted an incandescent red and attached at right angles; with a bent, black-enameled metal pipe running between the two planes, the piece looks less like an unfinished box than an abstract painting opened like a pop-up book. A year later Judd made a complete red box and embedded a straight piece of pipe along its top; placed on the floor, the piece resembled one of Newman’s paintings (typically, a single plane of color divided by a single contrasting stripe) materialized in 3-D. “Three dimensions are real space,” Judd wrote. “That gets rid of the problem of illusionism . . . one of the salient and most objectionable relics of European art.”

By 1965 Judd was arranging his boxes in orderly rows. To Susan Buckwalter (1965) is composed of four unpainted thirty-inch galvanized-iron cubes, placed about six inches apart horizontally along the wall; the boxes are linked by a slender, blue-lacquered aluminum beam running across their tops. Judd hung other, similar sequences of regularly spaced galvanized-iron boxes vertically on the wall or placed them on the floor, sometimes connecting them with beams, sometimes not, defying the viewer to categorize them as painting or sculpture. But the object of all the genre-confusion was simplicity, not obfuscation. “The thing as a whole . . . is what’s interesting,” Judd wrote. Within a year he had pushed even further to reveal the whole, making boxes of transparent, tinted Plexiglas. Now every part of the structure, both inside and out, was visible at once, nothing hidden or withheld, nothing presented except the unvarnished facts of form, volume, and color. At a time when “credibility gap” and “cover-up” were about to become part of the American lexicon, there was something of a prescient political message in Judd’s artistic full disclosure. And in eliminating allusions to church, state, or as Judd said, any “extraneous meanings, connections to things that didn’t mean anything to art,” his work also prophesied the zeitgeist of the Vietnam era on another level: With the counterculture about to flower, Judd had already cleared his garden of the old perennials.

By 1968, when New York’s Whitney Museum of American Art mounted the first major survey of Judd’s work, “Minimalism” had become as much a buzzword as “action painting” had been in the early fifties. Judd always hated the term, but he couldn’t escape being labeled the leading practitioner and ideologue of Modernism’s ultimate ism. To Minimalism’s admirers and bashers alike, the sculptural qualities most evident in his work—large geometric “primary structures” fabricated from industrial materials like plastic, plywood, or aluminum, their uninflected finish machined rather than hand-crafted—defined the movement. By the time Judd had arranged the first round of financing for his Marfa project, in 1979, he had already entered history as a Minimalist sculptor.

But there was a secret hidden in Judd’s transparent volumes: To a large extent they were still paintings, as much about light and color as they were about form and space. The final work in the Menil exhibit, made the same year as Judd’s Whitney show, is constructed of six large stainless-steel boxes with transparent amber Plexiglas ends, spaced eight inches apart in horizontal sequence on the wall; walking to either end of the piece, one can see entirely through a tunnel of amber light. But being able to peer inside the array of boxes is no longer the point; the real action takes place in the empty spaces between the boxes, where the hue and intensity of the amber-tinted, glowing ambient light passing through the Plexiglas panels varies as subtly yet spectacularly as the minute-by-minute progression of a sunset. Judd once wrote admiringly of Pollock’s cheeky response when his respected mentor, Hans Hofmann, admonished him to work more from nature: “I am nature.” Much like Pollock, Judd wasn’t trying to create an illusion of nature; he created a new version of nature, as it might exist in some Platonic parallel universe of pure geometric shapes—or simply in the artist’s head.

Don Judd and nature as most of us know it met in Marfa, and the result was an epochal collaboration. Driven west by the inability of conventional galleries and museums to showcase his unconventional, increasingly large-scale works, Judd initially wanted to install his magnum opus farther out “on the range”; at his patron’s insistence, he settled for the former Fort D. A. Russell on the outskirts of town. Replacing the walls and doors of two large artillery sheds with expanses of glass, Judd created a luminous repository for one hundred immaculately machined, regularly spaced aluminum boxes. Framed by a limitless horizon, bathed in a stunning display of natural light, these structures are anything but monolithic. Instead, they are infinitely mutable registers of their natural setting, literally reflecting variations of light, shadow, and color so subtle and fluid that no pigment could possibly convey them. It is the same transcendental play of light that transfixed nineteenth-century American Luminist painters and Western panoramists such as Thomas Moran and Albert Bierstadt, rendered on a three-dimensional canvas that only Judd could have imagined. The most significant feature of Texas’ cultural landscape, Judd’s rows of boxes are fundamentally a giant, futuristic 3-D landscape painting—the culmination of an ambition that must have germinated, in some inchoate form, in his unremarkable little abstract landscapes of the mid-fifties.

The Menil show illustrates the extent to which Judd’s profound impatience with the ancien régime was balanced by a profound patience in figuring out how to topple it. Instead of cooking up clever art-marketing strategies, he had the equanimity to simply endure youthful mediocrity, working at his easel like a prophet chanting in the desert, waiting to receive his vision. He found his way through study and trial and error, following step by step the path dictated by his own work. Judd’s hard-earned convictions would later foster furious impatience with sloppy workmanship and recalcitrant patrons, but they were the bedrock on which his Marfa project was built.

But the real revelation of Judd’s early work (at least that from the sixties) is how far ahead of its time it looks—not simply its own time but ours as well. In the Menil Collection’s beautifully installed exhibit, there is no sense that the work has been diminished by decades of progress, like the tarnished futurism of forty-year-old science-fiction films (or four-year-old computer animations). The forms still gleaming and perfectly fabricated, the strikingly original palette still defying imitators, the complex aura of light and color on and around the surfaces appearing even more otherworldly in our age of digital effects—this might be art from outer space as much as from one man’s extraordinary inner space. That science-fiction quality might also explain the fervor Marfa inspires in its pilgrims: the sense that Judd’s increasingly venerable monument nevertheless remains more a message from the future than an artifact of the past, inspired by a faith we have yet to comprehend, preached by a prophet still waiting for the rest of us to catch up.