The bomb threat that forced the evacuation of the University of Texas at Austin campus this past Friday may or may not have been linked to a similar incident at North Dakota State University, as well as less widely reported threats to smaller schools in Indiana and Ohio, and Monday’s similar scare at LSU.

But viewers of the Austin CBS affiliate KEYE got something more concrete on Saturday: This truly baffling story, which was both a video report and website article, claiming a more definitive connection … sort of.

“Bomb Hoax Hits UT, North Dakota State; Both Oil-Rich Schools,” was the web story’s headline, along with a second sentence saying that “The two incidences [sic] may seem unrelated, but the two campuses have one underlying resource in common: Oil.”

And yet, the article went on to conclude, “There is no official link between the two bomb threats and the campuses’ relationships with oil.”

During the TV broadcast, KEYE anchor Ron Oliveira introduced reporter Lisa Leigh Kelly by wondering if UT’s “background … could have something to do with these threats today.”

“What do those two universities have In common?” Kelly asked on camera. “One answer. Oil.”

Specifically, the state of North Dakota has recently surpassed Alaska to become the nation’s number two oil state behind leader Texas number one. But the KEYE story wasn’t really about that either, any more than it was about the bomb threats.

“Today major universities in both of those states were evacuated after simultaneous bomb threats,” Kelly said. “The caller from Austin claimed to be from Al Quaeda.”

Yet for some reason the piece goes straight from a reference to Al Quaeda to an interview with former UT Board of Regent Shannon Ratliff, who knows a lot about UT’s connection to the oil business and its endowment, but has nothing at all to say about the bomb threat, or even oil in North Dakota.

This appears to be less a case of a TV news broadcast sensationalizing something as, it already had a story halfway in the can about UT and oil, and tried to make it (poorly) fit into the top news of the day. They could have just as easily run a story suggesting that the two schools received threats because they both have football teams or because both Austin and Fargo have been the setting for a Coen Brothers movie.

Now, we should note that nobody is saying officially that today’s bomb scares were linked to these two campuses’ relationship with oil. We could eventually learn that today’s chaos was caused by two separate pranksters playing two sick jokes coincidentally at the same time. Or: maybe not. 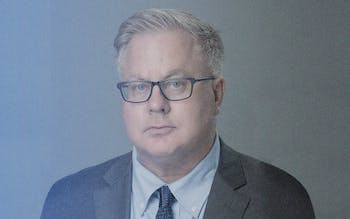