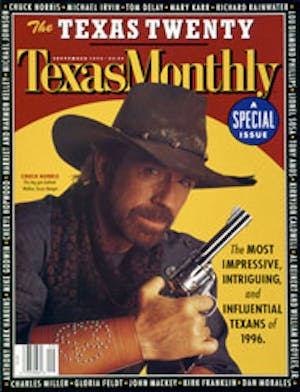 Most businesses in the West Texas town of Alpine cater to locals, but one attracts Eric Clapton, Robert Cray, Junior Brown, and other musical greats. It’s the modest building where Michael Stevens, luthier to the stars, produces electric guitars—fewer than two dozen a year, at $2,700 to $10,000 plus. “We hand-make everything,” says Stevens, a darkly handsome 51-year-old in a fringed leather apron and jeans. Amid neatly aligned tools, guitar-shaped templates, and a thick layer of sawdust, he designs, cuts, fits, sands, and paints; his latest object d’art, destined for a lucky studio musician in Los Angeles, is a gorgeous abalone-inlaid cutaway carved of purple-tinted flame maple. Raised on a horse farm in Ohio, Stevens first dabbled in instrument repair during the sixties—“I’d been fixing balers since about age one”—and eventually ran the custom shop of guitar giant Fender in California. Since 1990 he has worked on his own in Alpine. “Every guitarist’s dream is that his instrument was lovingly made by hand by some devoted guy laboring away in a dusty little shop,” says Stevens’ lone assistant, King Rhiley. “Well, that’s Michael.”