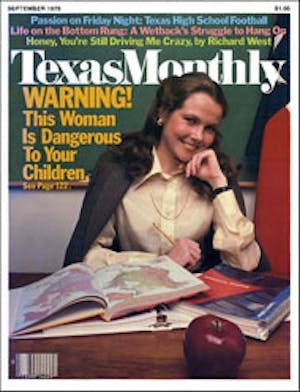 Why can’t Texas’ schools attract the talented teachers our children so desperately need? And why do so many teachers—including the few good ones—teach for only one or two years before fleeing to more satisfying jobs? We found some answers in talking to Carl Truscott.

Truscott, who taught French, came to Houston’s Mirabeau B. Lamar High School in 1974 as a recruit of the late Harold Costlow, who was then Lamar’s principal. Although Truscott lacked the education courses Texas requires of all certified teachers, he had something Costlow valued more: he was considered the top French student at the University of Houston. Costlow reasoned that if you want a French teacher, you should hire the one person you can find who knows French best. And by most reckonings the theory worked; observers agreed that Truscott made an exceptional teacher. So everyone was happy. Everyone, that is, except that state of Texas and the Houston Independent School District. Unwilling to look beyond the state regulations, HISD temporarily cut short Truscott’s promising career and deprived Lamar’s students of an increasingly rare resource.

Carl Truscott hadn’t asked to be a teacher in the first place, but the profession got under his skin. Below is his account, the story of one teacher whose dedication barely withstood the onslaught of teacher education. This time we got lucky, but for every Carl Truscott, how many good teachers have we lost?

I had graduated from U of H in 1971 with a degree in French and had then taken some graduate work in French. I was offered the job teaching French at Lamar with the specific stipulation that within three years I would make up all the certification deficiencies I had—eighteen hours’ worth of education courses. I started taking them in the summer of 1975. The first two weren’t too bad, they were just basic introductory courses in education. But after that it got to where the professor would make one term-long assignment and the class would never meet again for the rest of the semester. For instance, in one of the two courses I’m taking now, all we have to do is show up at 8:00 a.m. so the professor can take roll. Then the class breaks up so each student can work on an individual project that will amount to maybe a fifteen-minute report at the end of the semester. In another class we just listened to the professor ramble on about his experiences in the classroom thirty years ago. There was no text, no papers. It infuriated me; I was paying for it out of my own money and getting nothing in return.

All the while I was getting excellent ratings from my superiors at Lamar, and I kept asking myself, “Why am I doing this?” At any rate, I stopped taking as many courses as I needed to fulfill my eighteen hours by the end of three years, and when the three years were up an HISD official ruled that I couldn’t teach anymore. So since the end of 1978 I’ve only substituted. I support myself by being a waiter in a restaurant; I supported myself the same way even when I was teaching. A teacher’s salary just is not sufficient. I’m single, I have my own home, I own my car, but the last year I taught I made only $11,000 from teaching. It’s just not enough.

Even so, I’ve decided to go along and play the game—take the education courses so I can apply again to teach at Lamar in the fall. I decided to stay because I love teaching, I love working with teenagers. And the state requires every teacher in the state to take these courses.

But I’m not at all satisfied with the quality of teacher education in Texas. I don’t mean to run down my professors; I like many of them, they’re great people. But there’s just no purpose to the courses. Teacher education in Texas doesn’t prepare people to face a classroom. Elementary school teachers may be fairly well prepared, but at the secondary level they haven’t been as well grounded in their content area as in fun and games, in how to keep the students amused.

To be fair, I do see some signs of improvement, at least in secondary education, which is the only program I’ve seen. I do have one class now in teaching reading skills that is worthwhile. The professor is tops in the field and really spends a lot of time helping his students. And I think that’s becoming more the rule from what I’ve seen over the past four years.

But I was a fantastic teacher before I ever took these courses. I think I was a better teacher before I was exposed to all this methodology. I had books on methods that I would refer to if I got stumped, but mostly I thought up my own ways to present the material. And my students performed better on standardized tests. I don’t think I’ve learned anything at U of H about handling high school students in a classroom, or anything that would make me a better teacher.