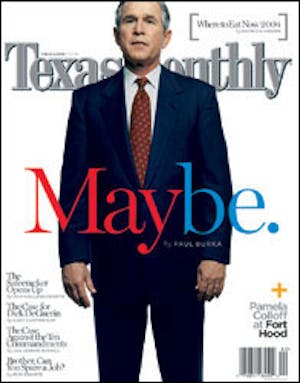 ONE FRIDAY NIGHT IN LATE November, I found myself at a fancy party on the University of Texas campus in Austin, speaking to a few hundred lawyers from Fulbright and Jaworski. The storied firm was celebrating the thirtieth anniversary of Leon Jaworski’s appointment as Watergate special prosecutor at the Harry Ransom Humanities Research Center, where the Woodward and Bernstein archive will soon be housed, and I was asked to “say a few words about the First Amendment.” This should have been a happy task; like every journalist, I have a soft spot for freedom of the press. But as I got to thinking about the contentious relationship between government and the media these days, my mood blackened—and I didn’t feel any better when I called David Anderson, a contributing editor at the magazine and a longtime UT law professor and First Amendment scholar, for a little shoring up. Watergate was supposed to herald the beginning of a new era, David said, in which the press would fulfill its institutional role as a watchdog—aggressively reporting on the big issues of the day, exposing wrongdoing and scandals. And for a while, that’s what happened. But in the past few years, access to information and people in power has been curtailed in an unprecedented way, and all of us are the worse for it. “Everything’s gone to hell,” he said.

David’s words have been ringing in my ears since that conversation, and no wonder. We’ve just come through a year in which politicians at the federal and state levels seemed to regard those of us who write and report for a living as an inconvenience or, at their most hysterical, a threat to the American way of life. They go around us to get their message out. They don’t trust us with matters of national security (except when they’re stage-managing events they want covered). They bristle at criticism to an unimaginable degree. They accuse us of doing their opponents’ bidding and engage in childish fits of name-calling. They refuse, in crucial cases, to tell us what we need to know to tell you everything you need to know. Hell indeed.

Let me be specific, since that’s the first thing the targets of these charges will demand. I’ll start in Washington. Remember how the elder George Bush, toward the end of his campaign against Bill Clinton and Ross Perot, brandished a bumper sticker that read “Annoy the Media”? George W. Bush might as well print one that says “Ignore the Media.” In a September interview with Brit Hume, of FOX News, the president bragged, in essence, about not reading newspapers, saying he relies instead on briefings from aides who tell him what’s happening that’s “worth worrying about.” Leaving aside the fact that this is a guy who not too long ago had to defend himself against charges that he isn’t intellectually curious, what kind of message is he sending to the country, and to young people in particular? Does he think the rest of us shouldn’t read newspapers either, that they serve no useful educational function? “A lot of times there’s opinions mixed in with the news,” he complained to Hume, who, given his employer, should know.

In October the president granted White House interviews to five regional broadcasters, part of a strategy to sell a rosy view of the war effort in Iraq to the American people by bypassing the kind of aggressive media outlets that ask tough questions and counterspin the official line. “I’m mindful of the filter through which some news travels,” he told a reporter for Hearst-Argyle Television. “Somehow you just got to go over the heads of the filter and speak directly to the people.” According to the New York Times, which is surely one of those filters, “White House advisers readily say they consider the regional media outlets more hospitable and less judgmental, and a better place to sell their wares.” The message here is clear: The media—those of us who do our jobs, who don’t publish press releases and don’t swallow what we’re served uncritically—are a bother, an obstacle to be gotten around. This is terrible for anyone who believes the press has a role to play in keeping the government honest. And you know something? It’s bad for those regional media outlets too. They may get an interview with the president, but they’re being played. The White House knows they’ll blithely report whatever they’re spoon-fed. Do they feel good about being taken for chumps?

This comes, of course, during a period in which the Bushies have lacerated the media for not buying into happy talk about the war on terror. Remember White House press secretary Ari Fleischer’s ludicrous admonition, after talk show host Bill Maher criticized the administration in the wake of September 11, 2001, that people need to “watch what they say”? (I always preferred the alliterative elegance of “Loose lips sink ships.”) Last September Defense Secretary Donald Rumsfeld chided media organizations for failing to report “the story of success and accomplishment” in Iraq and suggested that press critics of the war effort were giving aid and comfort and “staying power” to the enemy.

Have I mentioned that the president has had fewer press conferences than anyone in the job since the advent of television? Or that Vice President Dick Cheney continues to rebuff, to the point of being taken all the way to the Supreme Court, media requests for a list of participants in his energy task force? This White House seems not to understand that if you’re going to expect the media to cover the razzle-dazzle of your photo ops (such as the president’s aircraft-carrier speech in May and his Thanksgiving Day trip to backslap the troops in Baghdad), you shouldn’t object to questions on substance related to those photo ops (Who ordered the premature “Mission Accomplished” banner? Wasn’t the turkey Mr. Bush paraded in front of the cameras a prop?). It’s hard to consider this laundry list of examples without subscribing to David Anderson’s dim view of things.

I wish I could say things were better back in Texas. Well, they’re different. Here the problem is not avoid and ignore—it’s attack, attack, attack. I realize it’s nothing new for politicians to dislike what’s written about them, but the skin on this bunch is so thin it’s translucent. Perhaps we shouldn’t be surprised, when you consider the coordinated clampdown on dissent since the Republicans took control of both the House and the Senate for the first time since Reconstruction. Members of their own party who have the nerve to think independently are themselves attacked and called names. The only thing is, the GOP leadership can’t find primary opponents for those of us in the press, as they relish doing for their treasonable colleagues.

Here’s an example of what I’m talking about. Last July, right after we published Paul Burka’s and Patti Hart’s picks for the Best and Worst legislators of 2003, I was summoned to Speaker Tom Craddick’s office for breakfast. I was clearly going to be the main course. Almost before the Speaker and I exchanged hellos, he lit into me. We had made him our sole pick for the session’s Dishonorable Mention, and I was prepared to defend the choice—there had been some sentiment in our office that the Speaker, a polarizing figure to say the least, deserved to be on the Worst list, although his success, however messy, at passing the GOP program ultimately kept him off, and the Speaker’s Democratic nemesis, Jim Dunnam, of Waco, who led the Ardmore walkout, did make the Worst list. Yes, yes—but what really bothered him, it turned out, was the inclusion of three Senate Republicans on the Best list who refused to toe the line. How dare we reward those traitors? For that matter, how dare we have our own opinions about the session? Didn’t we know, for instance, that one of our Best picks on the Senate side, a committee chairman, hadn’t done anything, that his House counterpart had really done all the work? Perhaps the Speaker mistakes us for stenographers.

Here’s another example. In December, at the end of a year in which the governor called not one, not two, but three questionable special sessions on redistricting, Paul wrote in this space about his frustration with the way the Republican leadership was running things. If you’ve read Paul’s columns, you know he’s no cheap-shot artist. He doesn’t go looking for a fight, and he takes out after people only when their conduct descends to some unforgivable level. Even then, he agonizes—and agonizes. The Speaker’s response was to write the magazine’s publisher a letter accusing Paul of seeing things “through a Democratic party prism.” (Lieutenant Governor David Dewhurst has also alluded to Paul’s “political proclivities,” and we don’t need a wind talker to crack that code.) Of course. That’s it. It couldn’t be that we simply see things differently, that we’re entitled to, or that they’re the ones who view the world through a partisan prism. Paul must be playing for the other team.

For the record, we play for no team except Texas. Anyone who reads the magazine would have a hard time making the argument that we’ve favored one person or party or ideology over another. We don’t endorse candidates, though we say nice things about some and not nice things about others. Sometimes we say nice things about someone one month and not-nice things another; see, for instance, our coverage of Tony Sanchez during the 2002 governor’s race, of Dewhurst in 2003, and of George W. Bush over time (I’ve got my e-mail inbox cleared out for the hate mail that will be generated by Paul’s story in this issue). We don’t take positions on political issues per se, though when we have a point of view, based on statements of fact that are checked and rechecked, we freely acknowledge it. Sometimes this makes people happy and sometimes it doesn’t, which is pretty consistent with how it’s been since the magazine’s founding 31 years ago. Liberals—some, not all—think we’re too conservative, and conservatives—some, not all—think we’re too liberal (just as folks in Dallas think we favor Houston and vice versa). That tells me we’re doing our job.

And we’ll continue to, despite, or maybe because of, my black mood. Yes, everything’s gone to hell, but a new year has arrived—an election year—and another legislative session is not too far off in the distance. The country and the state deserve a debate over the issues, and we in the media are going to give them one. With help or without.