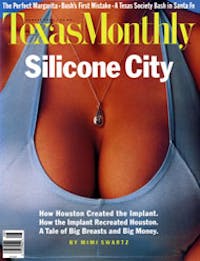 For a long time astronomers have wondered what else lies in the far reaches of the solar system, still to be discovered. Jupiter and Saturn are so big that they are hard to miss, but the cold nether region that lies beyond—where Uranus, Neptune, and lonely, distant Pluto circles the sun—has always been a puzzle. Pluto is the second smallest of the solar system’s nine planets, and it lies about 3.7 billion miles from Earth. It wasn’t discovered until 1930. Early in 1993 Anita Cochran, an astronomer at the University of Texas at Austin, learned that the faulty lens of the Hubble Space Telescope was being repaired and hoped that the instrument might produce some answers.

Cochran and a team of three other astronomers were able to obtain time on the newly refurbished telescope, and this past June, at a meeting of the American Astronomical Society in Pittsburgh, they announced their findings: Using images beamed down from the biggest telescope in space, they had found firm evidence of a long-suspected belt of comets that begins beyond the planet Neptune and extends out into space for billions of miles. High school science textbooks describe a solar system in which everything comes to an abrupt halt after Pluto. Cochran’s discovery, however, proves that this model of the solar system is wrong—the solar system doesn’t suddenly cease, it peters out in a vast stretch of cosmic rubble.

Anita Cochran has shoulder-length brown hair, direct blue eyes, and wears oversized glasses. She talks about her work with the full-tilt enthusiasm that other people reserve for sports teams. “I’m like a kid,” she says. “I get paid for my hobby.” She grew up in Roslyn, Long Island, and became fascinated by astronomy during her first course in the subject at Cornell. “I was hooked,” she says. “Astronomy is infinitely fascinating. It’s applied physics, but it’s an application that captures the imagination.” She came to Texas nineteen years ago to do her graduate studies at UT. There she met the man who is now her husband, Bill Cochran, a fellow astronomer who searches for planetary systems elsewhere in the Milky Way Galaxy, and she never left.

Over the past two decades, Cochran has become one of the leading experts on comets. Space is full of exotic phenomena such as dwarf stars and black holes, and by comparison comets can seem trivial. But astronomers believe that comets hold clues that will help elucidate the origin of the solar system. According to current theories, the solar system formed out of a large swirling gas cloud that gradually cooled and condensed into the sun, nine planets, dozens of moons, and innumerable comets and asteroids. “To understand conditions at the start of the solar system, we have to take what we see today and model it backward, and that’s a difficult task,” Cochran says. “The planets have undergone all kinds of changes. But comets are very, very tiny—basically the size of Manhattan. A comet sits for most of its life out in the deep freeze of space, and because it’s small it doesn’t have volcanoes and earthquakes and so forth. The ones we see today are almost the same as they were four and a half billion years ago when the solar system formed.”

In her early work, Cochran studied comets that hurtled past Earth to determine what they were made of. She used a spectrograph, an instrument that breaks light into its component parts. “They’re basically dirty snowballs,” she says. “They’re a mixture of ice and dirt. The ice is eighty percent water, with the other twenty percent being things like ammonia and methane—compounds that you commonly see around the universe.” But without also knowing where a particular comet had come from, astronomers weren’t able to use what they knew to say much about the original nature of the solar system. Comets that pass by Earth are migrants, or nomads; they are bodies in motion from someplace else and have left their context behind. It was as if geologists were left to puzzle over the significance of a sample of rock without knowing what the geological stratum above and below looked like.

For several decades astronomers have believed that the vast majority of comets rest in reservoirs at the outer edges of the solar system, circling the sun in fairly regular orbits, and that they leave only when they are disturbed—usually by the combined gravitational effects of the outer planets (especially Jupiter, which is by far the largest). Every once in a while, according to this theory, Jupiter or an alignment of several planets would capture a comet and fling it off in a peculiar direction—sometimes in a path that would send it zooming past Earth. Then the comet might appear in the night sky as a blazing streak of light. Some of the unsettled comets, such as Halley’s, adopt an elliptical orbit that causes them to return every so often, but many are launched into the eternity of space and never seen again.

In 1950 Gerard Kuiper, a former director of UT’s McDonald Observatory, theorized that there must have been material left over after the formation of the nine planets and postulated that the extraneous material had formed comets, which he predicted lay in a wide belt at the edge of the solar system (it may be anywhere from 5 billion to 10 billion miles across). This reservoir, which became known as the Kuiper Belt, was believed to orbit the sun in roughly the same plane as the nine planets. Shortly afterward, Jan Oort, a Dutch astronomer, predicted the existence of a second reservoir in the shape of a sphere. The Oort Cloud, as this formation is called, is thought to have formed relatively early in the history of the solar system, when the combined gravitational pull of Jupiter, Saturn, Uranus, and Neptune hurled a large number of comets from the Kuiper Belt into space. Some were lost forever, but others were recaptured by the sun’s gravity and formed a sphere around the rest of the disk-shaped solar system.

Scientists hunted for evidence of the Kuiper Belt and the Oort Cloud for years, but they could never find any. Typical comets are only three to eight miles across, and some are so dirty that they are almost black, reflecting little light. Even the closest comets in the reservoirs are about four billion miles away, making them virtually impossible to see from Earth. But finally in 1992, using a large ground-based telescope, a team of scientists at the University of Hawaii identified an object they named 1992QB1. They believed it was part of the Kuiper Belt, although it was unusually large for a comet. After that, 26 equally big objects were sighted in the supposed vicinity of the Kuiper Belt. But the astronomy community was not inclined to accept the giant objects as proof of the reservoir itself, because they were so much larger than comets that pass by Earth. Somebody had to find a host of objects of roughly comparable size.

Early in 1993, after hearing of the plan to repair the Hubble telescope, Anita Cochran and three fellow astronomers with expertise in comets—Martin Duncan, of Queen’s University in Kingston, Ontario, and Harold Levison and Alan Stern, both of the Southwest Research Institute, which has its headquarters in San Antonio—decided that the Hubble might be powerful enough to detect normal-sized Kuiper Belt comets. They applied for time on the instrument, alone with almost seven hundred other groups of scientists. About a hundred projects were accepted. Cochran’s team got data from its first observations in August of last year.

The team obtained images of the presumed Kuiper Belt at a point where a distant cloud of interstellar matter blocked light from far-off galaxies, leaving a nice dark background against which to look for the comets. But they had to manipulate the data to get rid of “noise,” or false streaks and dots left by cosmic rays bouncing off the Hubble telescope. After cleaning up the data, the scientist implemented their plan: They hunted for Kuiper Belt objects by calculating the trajectories in which the comets should move, if they were acting in accordance with theories about the reservoir, and then looked at the images to see if anything visible through the Hubble was behaving in this way. Using computers to manipulate the images, the team stacked photographs of the same location taken at different times on top of each other and moved points of light that they thought might be comets backward along the orbit that they would have assumed if they were part of the Kuiper Belt. When one of the points of light lined up with an earlier point of light, they suspected it was a comet, since it was acting like one. A few points of light could have lined up just by coincidence, but the chances were great that large numbers would match only if the scientists had found evidence of the Kuiper Belt.

Although the Hubble telescope is one of the most powerful instruments available to astronomers, looking for comets at the edge of the solar system is like trying to discern a hundred-watt light bulb from four million miles away, and the exercise pushed the telescope to its limits. Eventually, however, the scientists identified thirty objects the size of typical comets. “Harold Levison and I had been working to perfect the technique when we realized that we were seeing stuff,” says Cochran. “We tried to come up with every reason why what we were seeing wasn’t real, and we couldn’t come up with any explanation other than it was real.” And so the existence of the belt of comets that Gerard Kuiper first predicted 45 years ago was finally confirmed, laying the foundation for further exploration into the nature of the solar system. Now Cochran’s team hopes to study the structure of the Kuiper Belt—how thick it is, how the comets range in size, and whether there are places in the belt that are empty of comets. Scientists hope that the Kuiper Belt will eventually reveal what the temperature of the outer solar system was when it formed, what conditions led to the formation of Uranus and Neptune, and what paths the outer planets took before they settled down into their current orbits. If they can answer these questions, then they will have solved more of the solar system’s fundamental mysteries.