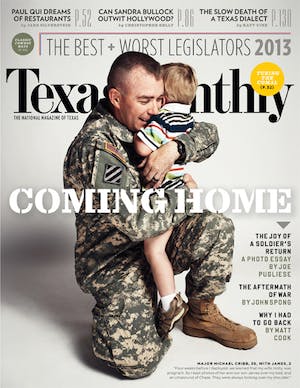 For reasons less obscure than you might think, we’re having a Comanche and Texas Rangers moment. One of this summer’s most highly regarded reads is The Son, the second novel by Austin writer Philipp Meyer, a sprawling Texas saga whose protean protagonist, Eli McCullough, is kidnapped as a boy by Comanche, eventually joins his captors’ atrocity spree, and just as opportunistically becomes an Indian-hunting Texas Ranger and then the paterfamilias of a great cattle and oil dynasty. Eli’s story is derived in part from one of Texas history’s most sensationalized episodes, the 1836 abduction of Cynthia Ann Parker by Comanche, a tale reexamined earlier this year by Glenn Frankel, the director of the University of Texas’s journalism school, in The Searchers: The Making of an American Legend. Frankel’s revisionist (i.e., professionally researched) take on the celebrated Comanche captive segues into a history of director John Ford’s classic 1956 film, featuring John Wayne as a racist Confederate veteran, accompanied by some Texas Rangers, grimly searching for an abducted niece based on Parker. This month Hollywood also revisits the Comanche-Ranger meme with Disney’s The Lone Ranger, pairing Armie Hammer’s justice-seeking ex-lawman with Johnny Depp’s faithful Native American sidekick Tonto—who, in a departure from the iconic television series, is now a Comanche rather than a Potowatomie.

The small-screen Lone Ranger subverted fifties notions of frontier morality with a hero in an outlaw’s mask who didn’t shoot to kill, didn’t shoot Indians, and faced down powerful, corrupt whites. If the trailers are representative, the Jerry Bruckheimer–produced Disney version adds little to the venerable racial-healing franchise except star power, laughs, and special effects. It’s left to Meyer and Frankel to recast, with bracing intelligence and savage irony, Texas’s heavily mythologized history, which has traditionally been served up as the triumph of white settlers and their demigod frontier sentinels, the Texas Rangers, over a hostile land and the barbarous Mexicans and Indians who inhabited it. Among the latter, the Comanche were the most formidable, mounting Spanish horses to create a Plains empire, centered in West Texas’s Llano Estacado, on lands brutally snatched from less bellicose Native American tribes. However, as both authors make graphically evident, in the mid-nineteenth century the lords of the Plains met their mirror-image match in the westering Texans, whom the Comanche soon came to regard as a singularly lethal, subhuman species. The ensuing race war was grotesquely genocidal, with each side determined to bring about a final solution to the problem of the other, by whatever means necessary.

Those means included the systematic slaughter of women and children, as well as mutilation, rape, and enslavement. (Largely unremarked on in both books is the Texans’ contemporaneous enslavement of hundreds of thousands of men, women, and children of African descent, many of them also raped and tortured.) Cynthia Ann Parker was nine years old when the Comanche rode off with her, setting her uncle on the futile fifteen-year search that inspired John Wayne’s role. The real Cynthia Ann was eventually “rescued” in 1860 by Texas Rangers who nearly shot her while mowing down her tiny band of squaws and children, a tawdry massacre that the leader of the Ranger contingent, future Texas governor Sul Ross, transformed into his foremost political asset, a glorious if entirely fictitious victory over hundreds of warriors and a feared Comanche chief. Cynthia Ann soon died despondent in a second captivity, pining for her Comanche sons, one of whom, Quanah Parker, went on to become a famous peace activist.

The Son gives this Comanche and Rangers revival (which also includes texas monthly senior editor S. C. Gwynne’s 2010 best-seller, Empire of the Summer Moon) a broader and more timely context. The Rangers were no heroes to another Texas “other,” the law-abiding Mexican Americans whom they routinely bullied and murdered, and Meyer ingeniously braids our violent southern border into a devilishly circular, what-goes-around-comes-around plotline. The Searchers, with racial themes considered explicit at the time, hit the big screen just months after Rosa Parks brought the civil rights movement to America’s attention. The Son hits our Kindles at a similarly portentous moment, when we are debating the fate of millions of undocumented, predominantly Mexican immigrants in our midst—most having negotiated the same Rio Grande that figures so prominently in Meyer’s interwoven narrative of star-crossed cross-border lovers.

The question of who’s here legally and who isn’t becomes Meyer’s most mordant theme, as noted by an undocumented immigrant (the story’s startling deus ex machina) whose family can date its Texas patrimony back to the eighteenth century: “The Americans . . . thought that simply because they had stolen something, no one should be allowed to steal it from them.” In Meyer’s lyrical but cactus-sharp retelling of the Texas saga, our resource-rich turf is no longer portrayed as God’s reward for its most virtuous, vigorous, and pale-faced conquerors. It’s always a stolen land, a transient layer of soil over oil-and-gas-packed rock that puts a curse of violence on each successive band of thieves—pre-Columbian tribes, Spaniards, Mexicans, Plains Indians, Anglo-Americans—that temporarily exploits it.

Of course, in present-day Texas the “others” are now the majority of our population, with the passage of power proceeding much more slowly than the demographic shift only because Anglos continue to represent the majority of eligible voters. But that margin will be erased within a decade as aging whites die off and Texas’s far more diverse children grow up, and soon we’ll have to decide if we want to write another chapter in Meyer’s tragic tale or come up with a new, multicultural narrative.

At the climax of The Searchers, Wayne’s Ethan Edwards, bent on honor-killing his niece, Debbie (Natalie Wood), for marrying a Comanche warrior, finally relents, taking her in his arms and delivering the line that in hindsight seems to foreshadow, in Edwards’s weary surrender of his racial taboos, our nation’s grudging acceptance of full citizenship for African Americans during the sixties: “Let’s go home, Debbie.” Here in today’s Texas, we could write the sequel—and begin to rewrite our own outdated history—by accepting that the undocumented Mexican immigrants who have spent years, if not decades, helping to build our state have already come home and deserve their own path to citizenship, regardless of how they got here.