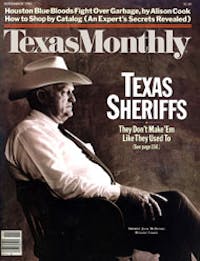 Along the highway into Laredo from the northeast, the first thing a visitor sees is a beige metallic building with a tall sign identifying it as the headquarters of the Laredo News. Prominently displayed on the sign is the newspaper’s slogan: “Keeps You Ahead of the Times.” As is so often the case in South Texas, there is more to this than meets the eye. It is less a slogan than a declaration of war, aimed at Laredo’s other daily newspaper, the Laredo Morning Times. Of all the cities in Texas, Laredo is the least likely site for a newspaper war. Statistically it is the poorest of the nation’s 305 metropolitan areas. A third of its households qualify for food stamps. Its population of 91,000 is more than 90 per cent Hispanic, and Spanish is the language of the street and the home. Successive peso devaluations have wrecked the economy that depended on trade from much larger Nuevo Laredo. Billboards all over town plead, “Believe in Laredo,” but most of the money in town is old money and those who have it aren’t about to risk it locally. It would be hard for one English-language newspaper to thrive here, much less two. Yet the war has been going on since 1977, and no end is in sight.

On an average day a visitor would find the papers indistinguishable. Each displays its name on a blue background. Each is a seven-day, full-size, morning paper. Each has at least one page written in Spanish. Each does a better job than the average small daily of letting the reader know what is going on in town. But in the things that count in South Texas—roots and political connections—the two papers couldn’t be more different. The Times has been around for 103 years, the News for just 7. The Times is a chain paper whose heritage has been Anglo, from the founders to the current owner, the Hearst Corporation. It is staffed mostly by reporters from Laredo. The News is locally owned—founded by Tony Sanchez, a wealthy Hispanic oilman and banker, and co-owned by his son, Tony Junior. Today the News is closer to the power structure, but that has not always been the case.

When Laredo was still a one-paper town, the Times was part of the old guard, whose political personification was J.C. “Pepe” Martin, mayor and political boss of Laredo for 24 years. Martin’s chief instrument was the Independent Club, a misnomer for a group to which anyone in town with aspirations in business or politics belonged. Among its functionaries had once been Tony Sanchez. In a town where government was often the employer of first and last resort, Martin kept control by dispensing public jobs and money. None of that was evident, or even hinted at, in the Times. The paper’s local coverage ranged from nonexistent to spoon-fed. Often the front page consisted entirely of wire service stories. On Saturdays the paper didn’t publish at all; the rest of the time it was an afternoon paper. This suited the old patrones just fine. But it did not suit Tony Sanchez.

In the mid-sixties Sanchez, then the owner of a small typewriter and office supply shop, had begun buying oil and gas leases after talking to Mexican geologists operating on the south side of the Rio Grande. When gas prices exploded in the early seventies, Sanchez formed his own company and got rich in the South Texas boom. In 1975 he added control of a local bank to his growing empire. He began to have ideas about Laredo that were different from those of the old patrones. Sanchez wanted growth, industry, jobs, and found himself growing estranged from the old guard that feared outsiders, from the machine that ran on patronage financed by oil company taxes, and from the newspaper whose social columns referred to him as Typewriter Tony.

Sanchez decided that to change the town he had to change the newspaper. After trying, and failing, to buy the Times, he decided to start his own. “There is only one reason for the News‘ being in existence,” Sanchez says. “This town was hearing only one side. If ever a community needed to hear both sides, this one did.” For the first sixty days the News was delivered free to every home in Laredo, and the war was on.

The News was barely a month old when, with the help of a maverick taxpayers’ group that the Times had ignored, it broke a story about serious discrepancies in the accounts of the city street department. Two weeks later it revealed that the street department, which possessed just 86 vehicles, had listed payments for 686 batteries. The effect was like seeing the emperor’s new clothes; as soon as the youngster talked, no one else could ignore the facts—not even the Times. Once aroused from complacency, the daily had no trouble scooping its semiweekly competitor on street department corruption stories. But while the Times stuck by Martin, the News attacked the mayor in front-page editorials. In late October Martin announced that he would not seek reelection. It had taken Tony Sanchez fewer than twenty issues to bring down the machine.

The battle was over, but the newspaper war was just beginning. Reporters joined the hostilities. Once a News staffer, worried that the Times had better information on a story, called the afternoon paper, posing as a reporter from Dallas. A gullible Times reporter spilled all. Then there was the parrot caper. Irked that the News filled out its semi-weekly editions with stories picked up from the Times, two Times editors wrote a fictitious story about a woman arrested at the international bridge for smuggling two rare Mexican parrots in her bra. The name the editors chose for the parrots was in-house slang for a female unmentionable, and the story was full of double entendres. Sure enough, the News fell for it.

After the fall of Pepe Martin the war settled into the trenches. The News became a daily in 1978. The Times had already added a Saturday edition. Later it gave up its traditional status as an afternoon paper to go head-to-head with the News. In a battle over circulation, the News stopped using the same auditor as the Times; since then each paper has said it has the higher readership. In 1981 Sanchez sued the Times for $60 million after it printed that he was worth $50 million, based on information in Small Business Administration documents. (The invasion-of-privacy suit is still pending.) The chain that then owned the Times, North Carolina-based Jefferson Pilot Corporation, compounded its problems by installing a publisher who made changes such as devoting an entire page of the small paper to stock market reports in a town where hardly anyone owns stock.

Finally, in 1981, the Times rallied. Jefferson Pilot brought back Mike Herrera, a former advertising manager for the Times who had switched to the News, as its new publisher. That ended the News‘ hometown advantage: Herrera, 34, not only is a Laredo native but also is related to the family that founded the Times in 1881. Under Herrera the Times began to recoup lost advertising, including an exclusive contract for the prestigious Frost Brothers account. It also became more aggressive journalistically. Meanwhile, as friends of Sanchez began to come to power, the News grew more protective of the city and the politicians. While it didn’t ignore stories the way the Times once had, some strange things happened in its pages: the mysterious omission of the district attorney’s name from a list of delinquent taxpayers, a front-page article exonerating a judge who had not yet been accused.

This past September the News attacked its rival on the front page. “Why has the Laredo Morning Times consistently made it a point to put down, tear down and outright ridicule this community we live in?” asked publisher Raul Perales in a column. He recounted institutions the Times had treated with less than total respect—the school district, the chamber of commerce, the grand jury, the most important civic award—and scolded Herrera for dividing the community. The newspaper war has come full circle. The News is the team player now.

The Times is extremely sensitive about such criticism. During its investigation of the school district, it ran a commentary pleading for understanding that the paper’s goal was better education. Herrera is quick to cite his company’s record as a civic booster, from organizing a joint festival with Nuevo Laredo to helping bring the San Antonio Spurs to town for an exhibition game. But he won’t apologize for the news columns. “If we have to wear the black hat to straighten out the town, we’ll wear it,” he says. “Politics is not the answer to Laredo’s problems. The fajita cookoff is not the solution.”

The overriding question is what will happen now that Hearst, a big company with sixteen dailies and forty weeklies, is in the game. Or, to put it another way, why is Hearst in the game? Surely it must understand, as Tony Sanchez says, “This is not a two-newspaper town—it’s either them or us.” Does Hearst want the Times to groom talent for the company’s nearby San Antonio Light? (Hearst already owns papers in Midland and Plainview.) Does it think that the Times can show a profit? (Herrera, who is staying on as a publisher, says that the Times made $187,000 before taxes last year and will earn $300,000 this year, but Tony Sanchez says that both papers are losing money.) Or did it buy the Times merely because Jefferson Pilot packaged it along with more desirable papers in Beaumont and Clearwater, Florida?

Finally, does Hearst really understand what it is getting into? Tony Sanchez sees the Times as the kind of paper that would rather destroy things than build them up, the kind of paper that does not understand the importance of unity in building the sound business foundation he wants for Laredo. Mike Herrera sees Tony Sanchez as an old patrón in modern guise. If Hearst plans to stay in Laredo very long, it had better understand that this is not just a newspaper war; it’s a war for the soul of Laredo.