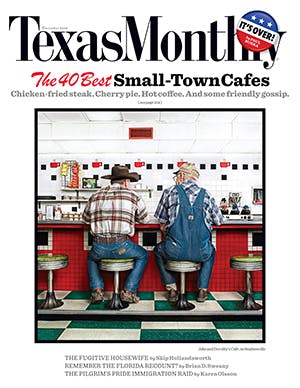 The only thing more unbelievable than a fat man shimmying down a chimney might be a December without The Nutcracker. For years, families have relied on Tchaikovsky’s two-act fairy tale to distract them from long lines at the mall and eggnog hangovers. So to imagine that the Texas Ballet Theater, the second-largest professional dance company in the state—and the primary supplier of sugarplum visions for thousands of North Texans—came dangerously close to shelving the tradition this year is more than a little alarming.

The first hints of this near-calamity came to light in August, after the Dallas—Fort Worth company canceled a trip to the China Shanghai International Arts Festival at the last minute. Although unexpected costs and a too-little-too-late donation drive were to blame, the 47-year-old TBT announced a few days later that it was facing an even graver predicament: bankruptcy. Owing $800,000 in bills (including back rent to the Bass Performance Hall), the TBT needed to raise $500,000 in cash before its season opener to keep from going kaput. With no development director (the position has been vacant since 2005), fewer donations (at least one particularly generous benefactor has scaled back his giving), and the exit of managing director John Toohey this summer, it was, according to chairwoman Robin Arena, the “perfect storm.”

Inspired by the San Francisco Ballet, which raised a similar do-or-die sum in 1974, the TBT’s 37 dancers have organized a Get Behind Your Ballet fund-raising drive. They’ve held a garage sale, organized a rock concert, pirouetted in several pro bono performances, set up a MySpace page, and taken to the streets (motorists were no doubt surprised to see tutu-clad solicitors en relevé in rush-hour traffic). Even though a Fort Worth Star-Telegram editorial has suggested that after The Nutcracker “the rest of this season should be canceled,” the TBT continues to take proactive measures, like revising its bylaws, creating a financial oversight committee, and making the search for a full-time development director a chief priority.

So The Nutcracker has been saved this year, but is there a future for the ballet beyond mouse kings and Mother Ginger? As of mid-October, the TBT has raised $1.5 million but is still short of its revised goal of securing $2 million in pledges before the year’s close. Plus, an additional $2 million is needed by the end of June to ensure that there will be future seasons. Artistic director Ben Stevenson—who was famously hired away from his 27-year stint at the Houston Ballet in 2002—has offered to step down if it would help the company, but it’s his sumptuous staging that has helped make The Nutcracker the TBT’s big moneymaker, accounting for nearly 40 percent of annual ticket revenue. Of course, this month’s performances might be a smidge less magical without live orchestral accompaniment (one of the emergency cuts), but considering the alternative—a holiday season with no Nutcracker at all—it’s a small sacrifice to make. In Fort Worth from December 5 to 21 at the Bass Performance Hall and in Dallas from December 23 to 28 at the Music Hall at Fair Park; 877-828-9200, texasballettheater.org

If you’ve ever looked askance at Marcel Duchamp’s Fountain sculpture, a urinal he signed simply “R. Mutt,” or seen Damien Hirst’s The Abyss, an arrangement of cigarette butts that recently sold for just under $3.2 million, and thought, “That’s art?” then you’re exactly the kind of viewer the Art Guys like to challenge. The Houston duo of Michael Galbreth and Jack Massing have been devising harebrained projects together since they met as students in the early eighties: They’ve sold ad space on their suits, traipsed through the city with leaf blowers, made a Pop Art grid out of Kraft Singles, and even put their own future cremated remains up for auction (there were no bidders).

All this in the name of art, of course, as “The Art Guys: Cloud Cuckoo Land,” a retrospective of their quarter-century collaboration now on view at Abilene’s Grace Museum, aims to demonstrate. The exhibit is more an homage to the pair’s imagination than a showcase of their finished products: Sketches, napkin doodles, and maquettes of their “failed schemes and pipe dreams” expose the wacky Galbreth-Massing mind-set, and drawings like those for 101 of the World’s Greatest Ideas for Putt-Putt Golf Holes, many of them purposely absurd, give insight into their creative fits and starts. But you’ll also find a few blueprints for those works that have succeeded, such as Travel Light, an assemblage of 360 glowing fiberglass suitcases that is permanently installed at Houston’s Bush Intercontinental Airport. Though the Guys pride themselves on producing accessible, democratic works that are anti-elitist, they also don’t mind if you’re left scratching your head. The real question, they say, is “What is good art?” And their answer? “We’re still working on that.” From December 12 to February 20; 325-673-4587, thegracemuseum.org

In art, as in life, you can’t please everybody. If critics like a particular work, the crowds don’t get it; when the masses are engaged, the culturati deem the piece too commercial. Which makes it all the more difficult to believe that one of the year’s most widely embraced exhibits is a survey of the relatively brief career of a Danish installation artist of Icelandic ancestry who lives in Berlin, is known for dyeing rivers bright green and creating waterfalls that go uphill, has been likened to both Isaac Newton and P. T. Barnum, and happens to be a former Scandinavian break-dancing champion.

“Take Your Time: Olafur Eliasson,” which has made its way to the Dallas Museum of Art by way of San Francisco and New York and comprises about twenty of this purposefully disorienting artist’s creations, is at once sufficiently cerebral and amusing. Consider Beauty, a contraption that pumps water through perforated tubing to form a curtain of mist that’s illuminated by a single spotlight. As you move around it, rainbows pop out of the sheen and vanish just as quickly. It’s typical Eliasson: an illusory tweak on our perceptions that, as the show’s title intimates, is wholly dependent on the viewer’s interaction. This same “wait and watch” element is found in The Outside of Inside, a new piece that’s making its debut in Dallas. A looped sequence of kaleidoscopic shapes is projected onto the gallery walls so that, in an optical twist, visitors start seeing afterimages (those uncanny pictures your brain produces) overlap with the vibrant pigments in the room. Similarly engrossing are his immersive color environments, like 360Ëš Room for All Colours, a circular enclosure that gradually changes hues, fluctuates in brightness, and—once again—relies on the eye’s natural adjustments for full effect.

Proving the “can’t win ’em all” dictum, there are still some grumblers out there: A few critics have questioned the gravitas of these projects—Are they radical? Do they shift expectations? What are they, besides fun?—and found insufficient answers. But whether or not you care about their philosophical underpinnings, Eliasson’s sensorial marvels have a seductive way of making the viewer feel like a vital participant. And that’s fascinating to everyone. Through March 15; 214-922-1200, dallasmuseumofart.org

Go to the Travel section for more than 170 other December events, including …

Dickens on the Strand
Not even Ike could keep this Victorian fest from celebrating its thirty-fifth anniversary. 12/6 & 12/7, dickensonthestrand.org