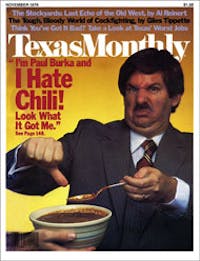 There are Texas cities with more musicians, more clubs, bigger honky-tonks, and hipper reputations than Lubbock, though none but Lubbock leaves quite so indelible a mark on its musicians and music. It is easy to spot Lubbock pickers even in a crowded jam session. From a distance they look like nice, God-fearing country folks (which most of them are), but up close you can sense that they are fanatical, even slightly deranged (which some of them are). They’re the ones who play as if their next breath of air depended on it. You can hear this desperate, overreaching attitude in Buddy Holly’s most frantic songs (“I’m Gonna Love You, Too” and “Down the Line”) and in the lyrics of Waylon Jennings’ recent autobiographical song, “Don’t You Think This Outlaw Bit’s Done Got Out of Hand?” Lubbock’s prairie madness can be seen in Bobby Keyes’ blistering saxophone solo on the Rolling Stones’ “Can’t You Hear Me Knock­ing?” and in Don Bowman’s hayseed humor, in the diversity of the Super­natural Family Band and in the mere existence of the Legendary Stardust Cowboy. Even the music of Lubbock’s current national recording artists, Jay Boy Adams and the Joe Ely Band, is permeated with the kind of wide-open spaces that surround the city.

Lubbock at its best has supplied the rest of the world with an impressive roster of imaginative and distinctive country and rock artists. But Lubbock has also produced Mac Davis, John Denver (a Texas Tech student), and Ralna English of Lawrence Welk fame —all of whom could have grown up anywhere and sound as nondescript as if they had. Lubbock at its worst is still a good place to spring from if not live in. I liken the environment to a Geor­gia O’Keeffe painting, stark and simple but exciting. Joe Ely’s manager, Johnny Hughes, claims that one advantage to living in Lubbock is never having to use your parking brake, but the flatness and its location three hundred miles from wood, water, and a metropolis of comparable size leave something to be desired. By virtue of the presence of Texas Tech it is regarded as an oasis of academia and liberal ideas in West Texas. But it is still a hard place to live. If the water doesn’t turn your teeth brown, the wind will.

One must go to great lengths for even the simplest amenities in life. Lubbock, for instance, is the largest city in Texas where one must drive beyond the city limits for a six-pack of beer. Locals regard the trip to the Strip, a string of liquor stores on the Tahoka Highway, as a traditional in­convenience created by archaic liquor laws. But I think the trip also builds character, giving a person plenty of time to mull over the possibilities in the oncoming night while meditating upon the neon mecca ahead. And if it is a hassle, at least everyone remains on a friendly first-name basis, as the signs for Mark’s, Bob’s, Cecil’s, and Pinkie’s attest.

Even a recreational activity like listening to or performing music can be a task. A former Lubbock resident, Butch Hancock, says it’s all a matter of diversion in a constant battle against boredom. In Lubbock the choices boil down to Jesus, cable TV, shopping at the South Plains mall, getting drunk or strung out on drugs, or creating your own amusement, which in a sense ele­vates music to high art on the High Plains.

The most extreme example of bore­dom breeding creative determination is Norman Odam, the Legendary Star­dust Cowboy. He was never melodious in the sense that Buddy Holly and other more celebrated natives were, but he left his mark nonetheless. Odam started out in show business by sitting in on the before-school hootenannies at Monterey High School in the mid-sixties. He knew only two chords on the guitar and both were out of tune. He sang in a Bob Dylan-nasal drone gone awry, and when he tired of singing, he’d blow his bugle or shout a rebel yell. He came to be considered a novelty around town and more than once had pennies thrown at, rather than to, him. But Norman Odam knew he’d be a star and he kept performing, oblivious to the hoots and jeers.

A classmate of Odam, Bill Ickes, re­calls the earlier stages of his career. “He was a product of desperation. It had to do with making something hap­pen yourself. There’s nothing to do in Lubbock. Norman was archetypal. He embodied living in West Texas, going crazy from the heat.”

After high school, Norman an­nounced that he was heading for the Johnny Carson show and left town, never to be seen again. He stopped in Fort Worth on the way and recorded “Paralyzed,” a primal-scream rocker that was promoted by Fort Worth pro­ducer Major Bill Smith as the world’s worst record. Norman never made it to Johnny Carson, but he did reach prime time as a guest on Laugh-In. His career has been on the skids since, but at least he essentially accomplished his goal.

Not everyone, however, must leave Lubbock to be appreciated. Had Wil­burn Roach ever made it to Dallas, he might be fronting a society orchestra. Instead, for the last fifteen years, he has led a band at the Westernaire Lounge on Avenue Q that plays his kind of black-tie music. From the out­side, the Westernaire doesn’t look like much. If not for the neon borders and decorative cactus by the entrance, the plain cinder block structure could pass for an ammunition dump. The interior, though, leads you to expect a clientele of cowboys with clean fingernails. At the door a well-dressed middle-aged lady takes your money and requests “your hat and your name.” A black light illuminates Day-Glo horseshoes hanging on the wall.

Wilburn Roach looks like Bing Cros­by and sings like Hank Snow. His music is a sophisticated mix of both men’s, urbane but with a solid country foundation. The night I visited, the band wore shiny blue tuxedos; Wilburn wore a red one. Saxophonist Don Caldwell, who owns the only significant recording studio between Clovis, New Mexico, and Dallas, was just sitting in for the night, but he wore a tux, too.

In the span of one set, the band covered the spectrum of Lubbock’s musical influences, grinding out a raunchy version of the old Bill Doggett rhythm ’n’ blues instrumental “Honky Tonk,” shuffling with ease through “Kansas City,” and soothing the well-dressed weekend crowd with the Mills Brothers’ “Cab Driver.” Just as a re­minder that this was Lubbock, Roach interspersed those songs with kicker standards like Merle Haggard’s “Tonight the Bottle Let Me Down.”

Sometimes regular gigs in nightclubs aren’t diversion enough. On one Satur­day night, Joe Ely, his Austin colleague Butch Hancock, and all their friends with instruments headed to the home of Ponti Bone, Ely’s accordionist, for a picking session. Each played his own songs, often stopping to scribble on note pads or to record a particular number on a portable cassette. Johnny Hughes compared it to the old days of poetry readings, coffee houses, and beatniks. “I used to have parties before bars got big around here. Back about ’65, ’66, Lubbock was full of folkies and just about the only place they could play was private parties. It was a real encouraging scene. Everybody’s totally for each other’s art in that kind of situation.”

Because of Ely and Hancock’s po­tential, an epic song could have been put forth on that particular Saturday night, but by early Sunday morning the session had degenerated into an im­pulsive drive to an after-hours joint outside of town. Earlier in the evening the Grand Ole Opry drifted in on the AM radio from Nashville as Waylon Jennings was receiving a rousing de­mand for an encore. Encores usually don’t happen on the Opry, but emcee Roy Acuff asked Waylon back, and he came out and sang a song about being crazy. I was glad he’d made it to the Opry, but I was also glad a few nuts stayed behind in the Hub City.

“I sure like this place,” Ely said, sur­veying the crowded after-hours club. “There’s all kinds of folks in here. Cotton farmers, hoods, working men, high rollers. The cops know about it, but they’d rather know where all the characters are going to be this time of night instead of having to hunt for ’em all over town.”

Ely admitted that Austin is a prettier city and that you can do more business in L.A. “But I couldn’t get any writing done in those places,” he said. “There’s room to think here.” Sitting outside the after-hours joint on a picnic bench be­neath a string of naked light bulbs somewhere in the middle of a cotton patch an hour before sunrise, he looked right at home.

Lubbock has not bestowed fame upon its celebrities. Like Niki Sullivan of Buddy Holly’s Crickets once said, “It never did make us feel like stars.” In the past, that attitude sent Lubbock’s most talented children scurrying out of town as soon as possible. Now, in this age of People magazine, when the pub­lic is obsessed with the famous, Lub­bock is turning out to be a good place for artists to stay even as fame is bestowed upon them. While souvenir vendors are hawking trinkets up and down Elvis Presley Boulevard in Mem­phis, a half-tipped-over urn of plastic flowers and shards of broken beer bottles are all that distinguish Buddy Holly’s grave from the others in the Azalea section of the Lubbock ceme­tery. There is subtle virtue in that contrast.

Joe Ely once told me a Lubbock legend about Holly. “If you put a piece of sheet music on Buddy Holly’s grave and turn around, it’ll be gone when you look back again.” He did not need to add that without the wind, the desolate flatland, and the indifference, there would be no legend.