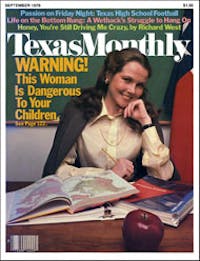 The now famous Wesman Personnel Classification Test that started all the trouble in the Dallas Independent School District was not designed specifically to examine teacher competence. The test that 36 per cent of the teacher applicants, 50 per cent of the teachers hired in 1977, and 54 per cent of the new administrators could not handle is essentially a measure of verbal reasoning and mathematical ability. Taking only 28 minutes to administer, the Wesman test has nothing to do with anything a students learns in the 18 hours of college education courses required as a minimum for Texas certification. The “subject matter” of the exam, insofar as it has one, should theoretically have been mastered by a college graduate before leaving the tenth grade. The Wesman consists of sixty closely guarded multiple-choice questions, forty of which are verbal analogies. Three Wesman-type examples follow: For vertical image:

The correct answers are fish-air, book-army, life-dark. Imagine a teacher who answered “apple,” “tree,” or “wet” on the first part of the first question trying to explain to your child the causes of the Civil War.

A few of the twenty mathematics questions involve obscure concepts like square roots and percentages, but all work out in round figures. Here are four examples in ascending order of difficulty: For vertical image:

Texas Monthly will give no prizes for working out the correct solutions. The cutoff score suggested by DISD researchers was 35. They calculated that there was a 99 per cent probability that a person scoring lower than 35 would not earn a score of 600 on the Educational Testing Service’s National Teacher Exam.

Originally the DISD board had mandated the NTE. But only 25 per cent of its applicants had taken the NTE; the rest could not be examined until November, by which time they would have been three months in the classroom and could not legally be sacked for low scores. So the DISD settled on the Wesman. Since then the district has set out to design its own test, drawn from what it calls its “baseline” curriculum. Partly the DISD wants to avoid the usual charges of cultural bias by making applicants show they can understand what they are expected to teach; partly they hope to design a secure test. The first response in Dallas-area colleges to the Wesman test was to cheat. Copies of the exam were widely available on most campuses.

The idea of testing teacher competence is not a new one in Texas. Houston teachers were expected to pass a written examination as long ago as 1876. The following questions are selected from the total of 84 administered to applicants on June 11 and 12, 1895. The test took two days to complete and was divided into several categories, including “Theory and Practice of Teaching,” “English Grammar and Composition,” “Civics,” “Arithmetic,” “Algebra,” “Geometry,” “Texas History,” “United States History,” “Geography,” and “Physiology.” It is cited in Dr. William A. Young’s dissertation, History of the Houston Public Schools. How and when it went out of use we have not determined.

• Show the truth of this statement: all our knowledge is based upon sense perception.

• Give your ideal of order in the school, telling what means you would employ in attempting to make the ideal real.

• Explain the difference between “language lessons” and formal grammar.

• Name the three general departments of our government, and explain briefly the function of each department.

• Give the necessary steps in the solution of a problem in which the interest, the time, and the amount are given, to find the rate per annum.

• (a) Why is Sir Walter Raleigh mentioned in U.S. history? (b) Why is Balboa?

• Give three causes that produce marked differences in climate of places having the same latitude.

• (a) Name two kinds of matter entering into the composition of bones; (b) give a property peculiar to each; (c) state the time of life at which each predominates.

Sharpen your pencils, candidates. And expect no help from us.