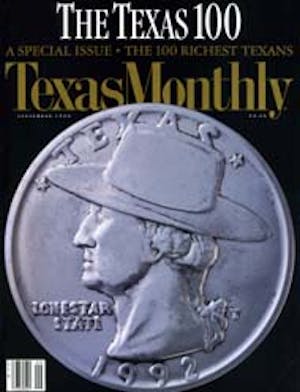 IN A LETTER TO A LONGTIME FAMILY FRIEND, FORT Worth oilman Tex Moncrief remembers his father, legendary wildcatter Monty Moncrief, carrying him across a river on his back during a fishing trip. “In later life and business,” wrote Tex, “my dad has carried me across an even wider river, and if possible—on an even stronger back.” From the moment the thirteen-and-one-half-pound Tex was born on the kitchen table of the family’s Arkansas house, the two men’s lives were tightly intertwined. Through forty years of sharing a business, hobbies, family heartbreak, and mutual adoration, Monty was the defining point of Tex’s life.

The office where Monty died is ordinary. Hieroglyphic-like seismic charts, mud logs, and maps of drilling leases, the prolific wells reduced to stick-on dots, cover the walls. On that day in 1986, Tex and his son Charlie were shooting the breeze when Monty wandered in, demanding to get in on whatever deal they were discussing. It was a family joke that Monty, even at ninety, couldn’t pass up a deal that might bring one last big play. Suddenly a pain shot through his back. Tex and Charlie laid him on the floor, but soon he was gone. Tex’s arms were wrapped tightly around him.

It’s unimaginable that Tex would not have been there. “We were like two peas in a pod,” he likes to say. Tex was ten in 1931 when Monty hit Lathrop #1, the discovery well that extended the East Texas Field and enabled fledgling Moncrief Oil to take off. Watching his dad and the other men throw their hats into the slush pit, Tex was struck with a conviction from which he has never wavered through six decades: He was going to be an oilman.

Six years after Monty’s death, the silver-haired, elegant Tex looks banking-boardroom wealthy, tasteful, and discreet. Tex’s childhood home, an enormous Tudor mansion across from Fort Worth’s River Crest Country Club, makes it apparent why Tex balked at being sent off to Indiana’s Culver Military Academy at fourteen. “I had an easy life,” he admits. Allowance was 50 cents a week, but no chores were assigned. The only job Tex recalls was caddying for his dad occasionally.

While pursuing a petroleum engineering degree at the University of Texas, a case of “kid stuff” set in, and Tex decided to drop out to become a golf pro. On hearing the news, Monty roared into Austin, grabbed Tex by the shirt, lifted him off the floor, and explained that he would get an education, even if he had a beard to the ground when he graduated. It was the only time in Tex’s life that he considered not following Monty’s advice. After a World War II Navy stint, Tex joined Moncrief Oil, by then a substantial independent. He threw himself into the company, becoming his dad’s constant companion. When Monty hit the road to visit a well or make a deal, Tex was with him. Tex learned by watching, and by the late forties, he was making deals on his own.

“My dad and I went through the best time in the oil business,” Tex remarks. Indeed, those were heady years. Tex remembers Monty golfing with Bob Hope and Bing Crosby in Palm Springs, California, eventually making them partners in the huge Scurry County find. The office displays a photo of Desi Arnaz, flanked by Monty and Tex.

The oilman’s life is different today. The money is still there—seen in Tex’s DC-9 or the nightly glass of Dom Perignon that he and his wife, Deborah, drink as they watch the 10 o’clock news or his penchant for carrying pruning shears in his golf bag to trim the trees on the private Shady Oaks course. But Tex worries about finding many more big plays in the United States. For him, like Monty, only the big plays matter. Although he considers foreign deals, so far he has refused the lure of international fields. He and Monty agreed in the forties that they weren’t “big enough or rich enough people to go foreign.”

But Moncrief Oil is surviving, a tribute to Monty’s nose for good finds and his insistence on being debt-free. Perhaps his best legacy was the life he led with his son, a relationship now mirrored by Tex and his son Charlie. Does Tex ever wish that Monty was still here to offer advice? “I get it,” he says. “I talk and pray to him every day. I’ve never known my father to be wrong.”