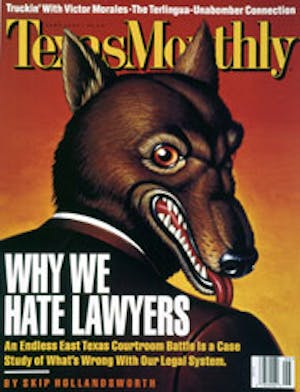 IN 1990 A UNIVERSITY OF TEXAS at Austin finance professor named Stephen Magee made headlines when he tried to put a dollar figure on the damage that lawyers and lawsuits inflict on the U.S. economy. He eventually estimated $320 billion a year—$1 million for each of the 320,000 American lawyers that he determined to be superfluous. Clever rogues that they are, lawyers were quick to respond: Magee received letters from attorneys wanting to know where they could surrender their law licenses in exchange for the million bucks.

Maybe that’s not such a bad deal after all. A good place to start would be the East Texas town of Daingerfield, the scene of the largest mass products-liability lawsuit in the United States and the subject of Skip Hollandsworth’s cover story, “The Lawsuit From Hell” (page 106). The case, which alleges that a variety of toxic products shipped to the Lone Star Steel plant caused thousands of workers to contract serious diseases, has lasted for nine years with minimal evidence to support it—“a maddening morass of litigation,” writes Hollandsworth, “that has ensnared hundreds of lawyers and generated untold millions of dollars in legal fees.” The discrepancy between the gargantuan cost of the case and its scant merits ought to make the entire legal profession ashamed of itself.

But the lawyers, of course, reap the rewards for their shenanigans while we pay the bills. The cost to each of us in the higher prices we pay for insurance and products is one good reason why, in the words on our cover, we hate lawyers. Excess medical claims add between $100 and $130 to the cost of every automobile insurance policy. The threat of lawsuits, which critics call a “tort tax,” accounts for half the cost of a football helmet, one-fifth the cost of a ladder, one-sixth the cost of a pacemaker. These indirect costs—estimated by Forbes magazine at $300 billion—pile up on top of the direct costs of legal fees, jury awards, and settlements.

Another reason to hate lawyers is that they are the ultimate hypocrites. (Some would say the same for journalists, but our fee is only $2.95.) Lawyers love to present themselves as champions of justice, but in fact the legal system benefits lawyers more than the people it is designed to help. In the routine field of automobile injury cases, lawyers on both sides take home almost half the dollars paid out by insurers. In mega-lawsuits, brazen types can do far better. When a class-action suit over dental adhesives was settled for $1 million, the original plaintiff got $25,000, another 650 plaintiffs ended up with $7 each, the remaining 2,800 plaintiffs received discount coupons for dental products, and the winning lawyers took home $954,934.57.

Money, however, isn’t the only price that society must pay for litigious lawyers. The biggest losses occur in ways that are beyond measurement: how the results of lawsuits and the fear of lawsuits alter behavior and diminish our everyday lives.

Lawyers will tell you that they are defending people’s rights, but what too often happens is that one victim’s gain is the public’s loss. Tragically, a woman was raped in an Austin late-night laundromat, and her lawyer filed suit, contending that the owner should have provided security. She won the case, but the company couldn’t afford to hire a security guard for every laundromat. Instead, it closed 36 outlets in high-risk neighborhoods, putting 75 people out of work. Another justification lawyers use is that lawsuits benefit society by setting a higher standard for future conduct. But that’s not the impact of most lawsuits. When a real estate agent got sued for giving out the wrong number of square feet, for example, do you really think that lawyers for other agents told their clients to make extra-careful measurements in the future? Of course not. The lawyers advised agents to stop giving out the information altogether.

But, the lawyers will say, the threat of lawsuits has made America a much safer place. Perhaps—but safety has come at a high price. More than diving boards (and, in colder climes, sledding sites) in public parks have been taken away from us. A 1992 report by Science magazine, subsequently confirmed by the U.S. Office of Technology Assessment, found that fear of litigation has hampered the development of an AIDS vaccine. One researcher told the magazine, “If a vaccine protects ninety-nine people and one person develops complications and they trace that back to the vaccine, that one case will send the company down the drain.” If lawyers can claim credit for protecting society from harmful products, they must take the blame for preventing society from using beneficial products.

The lawyers are right about one thing: Lawsuits are a powerful threat—so powerful that they border on extortion. The cost of fighting a suit is so enormous, even for a large company, that often the more prudent course is to settle a case rather than pay the legal bills necessary to fight it. A Texas grocery store won a lawsuit brought by the family of a thief on drugs who had been chased and caught by the store’s employees and died before the police arrived. The price of victory: $250,000. The smaller the company, the greater the incentive to pay money to get out of a lawsuit. Lawyers exploit this vulnerability shamelessly, suing parties they know to be blameless as well as those they suspect are blameworthy. In a sad case in which an innocent bystander was killed in a shooting at a shopping mall’s food court, the lawyers sued not only the mall (for inadequate security, again) but also the twenty or so stores in and around the food court.

How did we get into this situation—and how do we get out of it? The first answer is that we are at the end of a pendulum swing that has gotten out of control. When I got my law degree (lawyers call this an admission against interest), the legal deck was stacked against plaintiffs who brought lawsuits. If a drunk driver speeding down the wrong side of the road with his lights off demolished a car whose driver made the slightest mistake, such as failing to honk his horn, the second driver was guilty of contributory negligence and could not win a lawsuit. The unfairness of a system in which a defendant who was 99 percent at fault could prevail caused state after state to change its laws, until the day came when defendants were in the same luckless position that plaintiffs used to be in: In defective-products cases, a plaintiff who was 99 percent at fault could still win.

Tort reforms have restored some balance to the system. They have put an end to break-the-bank punitive-damage awards and limited the ability of lawyers to shop around for friendly judges to hear their cases. But tort reforms don’t change the fact that the legal system benefits lawyers more than the people it is supposed to help. Tort reform doesn’t change the fact that lawyers can sue people without justification.

Here are two reforms that do get to the heart of the matter.

1. All judges should be appointed rather than elected. The fundamental problem in Texas tort cases is that judges don’t do their jobs. They don’t toss meritless lawsuits out of court. They don’t stop lawyers from using delaying tactics to drive up fees. They don’t use their power to reduce absurdly high jury awards. The reason is that they are afraid of arousing the wrath of lawyers, who could underwrite an opponent’s campaign, and losing their seats in an election. Imagine what the reaction in Daingerfield would have been if the local judge had dismissed the Lawsuit From Hell and its three thousand plaintiff-voters from his courtroom. In Texas courts, where judges are elected, the lawyers are in charge. In federal courts, where judges are appointed, the judges are in charge.

2. Lawyers should be sued and disciplined for misusing the legal system. But before this can happen, lawyers must be stripped of the power to police themselves. The current grievance system, controlled by the State Bar of Texas, doesn’t even address most of the reasons why people hate lawyers. Lawyers don’t get punished for filing lawsuits without evidence or for casting wide nets that ensnare every conceivable defendant; they get rich. A lawyer who commits offenses like these ought to have his law license suspended, and he should have to pay actual and punitive damages. Part of every lawyer’s bar dues ought to go into a fund for civil “public defenders” who would prosecute complaints against lawyers. The final decision would be made by a jury. The hope is that if lawyers themselves are subjected to the same indignities that they heap on everyone else, they might, just might, begin to change their ways.