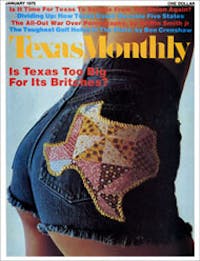 A good golf hole should bring out the best in a golfer and make him want to rise to the challenge of the hole. The best golf holes combine these three elements: natural beauty, the harmony of the beauty with the surrounding terrain, and the demands on a golfer’s skills. The effect should give you a feeling, standing on the tee, that this is what the game is all about. A good golf hole is above all “tight,” meaning there is no room for error. But the hole shouldn’t be impossible. It should reward good golf and punish bad golf.

My two favorite golf courses in Texas are Champions in Houston, where the U.S. Open was played in 1969, and Colonial in Fort Worth, one of Ben Hogan’s favorite courses. But it would be hard to imagine a better nine than one made up of my favorite golf holes in Texas.

Champions Golf Club, Houston 1st hole, 445 yards, par 4
The hole is a long par four, but not too long. It’s an ideal starting hole because two good golf shots give you a chance for a birdie—and there’s nothing like a birdie on the first hole to get you off to a good start. I picked up a three here on the first day of the Southern Amateur in 1973 and went on to win the tournament. To get a birdie, you have to stay to the left, avoiding the fairway bunker to the right and the trap to the right of the green. A good drive, a good seven iron, and you’re on your way.

Champions Golf Club, Houston 4th hole, 246 yards, par 3
This is about as hard a par three as you can find. The fairway actually doglegs left around Cypress Creek, but you have to hit over the length of the creek to reach the green. There’s no playing it safe, either, because if you try to stay to the right you can end up in the bunker to the right of the green.

Champions Golf Club, Houston 5th hole, 499 yards, par 5
I like the fifth at Champions because it rewards good golf shots. It’s a par five, but if you hit two good shots you can get home in two. The entrance to the green is very narrow and is guarded by two bunkers, and the green itself is also very narrow, so the second shot must be accurate. I birdied the hole when I won the Southern Amateur.

Colonial Country Club, Fort Worth 5th hole, 466 yards, par 4
The fifth at Colonial is widely recognized as one of the great golfing holes in America. It’s one of the hardest holes I ever played—a long, long par four with a dogleg to the right around the Trinity River. You need a long drive and a well-placed second shot, because three traps guard the green. If you make a par here, you’ve earned it.

Houston Country Club, Houston 5th hole, 413 yards, par 4
I took a double bogey on this hole during the qualifying for the national junior championship. It has a narrow fair­way, giving you only about 30 yards to land in. There’s a gully down the left side and a steep slope behind the green; if you go left or over it’s practically an automatic six. The hole has a downhill-uphill layout, but if you make a mistake it’s all uphill.

Great Southwest Golf Club, Grand Prairie 3rd hole, 236 yards, par 3
This hole requires a well-controlled shot alongside a lake to a green guarded by three bunkers. If the ball fades you’re in the water, and if you pull it, you’re in a bunker on the left—or worse, in the trees. I’ve bogeyed this hole three times.

Municipal Golf Course, Austin 7th hole, 420 yards, par 4
Ben Hogan once called this “the hole without a fairway.” The fairway runs downhill to a creek, then uphill to a rolling, sloping green. All the golfer can see standing at the tee is two rows of trees coming closer and closer together as the fairway approaches the creek. The first shot has to be long and straight, and the second had better be close to the pin. You don’t want any long putts on that green.

Preston Trail Golf Club, Dallas 16th hole, 428 yards, par 4
Preston Trail is the home of the Byron Nelson Classic, and the 16th is a good golf test. It’s got all the ingredients of a good driving hole: a narrow fairway, trees on both sides, and water guarding the green. You need a perfect drive, because the approach is a pressure shot. If you’re short you’re in the water, and if you’re long you’re in danger of landing in the bunkers behind the green.

Woodlake Golf Club, San Antonio 18th hole, 583 yards, par 5
The fairway is surrounded on both sides by long fingers of water extending halfway to the green. I came to the 18th last year at the Texas Open, leading Lee Trevino by one stroke, and it seemed like all I could see was the water. You have to hit your drive in that narrow strip of fairway be­tween the lakes, then you have a wide fairway leading up to the green. I got on in three, sank the putt, and won my first tournament, so the 18th at Woodlake will always be one of my favorite holes.