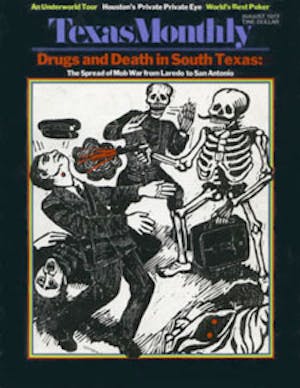 A FRIEND OF MINE, Tom Sutherland of the English faculty at the University of Texas at Arlington, is a good writer and the kind of guy you lose track of time talking to. I suppose, reciting his distinctions, one should also mention that he used to be staff chief of the Texas Good Neighbor Commission, and he and Lois Sutherland have five daughters whose values and individualities collectively attest to the quality of their parents. The reason I mention Tom now, however, is the fact that ten or twelve years ago, during one of my drop-ins on the English-teaching, guitar-picking, song-singing, better-world-seeking circle of friends I visit among in Arlington, he taught me how to cook pinto beans.

I realize that most of the readers of Texas Monthly are urban sophisticates who are more likely to be doing something French to something red extracted from the meat market at $3.79 a pound than they are to be messing with pinto beans. Who can imagine jaded city types coming in after a night at the theater and curling up on waterbeds with smoking little bowls of beans? Perhaps there are a few among who trouble from time to time to resent the price of meat or unavoidably encounter someone else who does with whom you can share the mysteries I am about to divulge to you. All I ask is that you not hold Tommy Sutherland responsible, because a recipe, like a story often told, changes through the years, but not always for the better .

Sometime when somebody comes by and you don’t want to just sit there talking indefinitely, take a pound of dry pinto beans {which cost about 15 cents and make a couple of pounds of cooked beans) and strain them across your fingers into a colander, looking for small pebbles, which I’m told have been known to crack teeth. Wash the beans and put them on a low simmer in a lot of water six or seven hours before you want to eat them. {Tommy, as I recall, soaks his overnight, and this is the general custom, but my theory is that it’s better to have the spices in the water when the beans are soaking it in.) Put in salt, but not too much-you can add it but can’t take it out, as they say.

From this point on it doesn’t matter much when you do what to these damn beans, as long as you get it done by an hour or so before they’re ready to eat. From time to time, (right away, or between breaks in work, or among snoozes, a walk in the sunlight, reading, a dalliance, or whatever sophisticated is going on in your life that day,) chip up some other stuff about the size of beans and pitch it into the pot. celery, always, a fresh tomato or two ( or a can of them), a goodly onion or preferably two, maybe some green pepper, and some lean and well-chipped-up meat. Tommy uses salt pork or bacon, but I regard animal fat as slow poison and have never seen the case for longrun suicide just because it’s the custom, so I put in chicken, stew-beef, or lamb.

The main thing is jalapenos. If you’re new to the state or the foods of the bicultural Southwest you need to know about these hot green peppers. I learned about him in the following manner. I was about 20, over in Matamoros with a Mexican friend of mine the night when, in a context I shall recall in a novel sometime, he said, “Such is a life without a wife.” We went to this open-air restaurant with a floor show raging, and from the table laden before us he chose to suggest that I should eat “one of those little Mexican pickles.” I ate it whole, spoke in flames, rubbed my eyes, and went blind for 45 minutes. It was some time before my fear of these particular pickles metamorphosed into respect and thencefrom into my present posture toward them, passion.

The reason, I think, that Mexicans use jalapenos so much is, being mostly poor people they eat a lot of beans, and you have to make beans taste good when you eat them so much or you’ll get wild in the head or mean to your children. Canned jalapenos come high in U.S. stores like nearly everything else the food industry puts in cans. Some day somebody is going to compare canned-food prices with the cost of raw food and cans and start a Ban the Cans Movement. You can buy gallon-size cans of the peppers just across the border in any Mexican town for a little more than a dollar, and some Texas stores now carry these cans with only a little add-on to the price.

For one pound of beans, put in as much jalapeno as you have macho or macha. (I mean, what the hell, why not?) I suggest that unless you break out in rashes easily or tend to resent anything but ideal weather, you start with one average-size pepper per pound of beans. Slit it, take out and discard the seeds (which are illegally hot), and chip the pepper into tiny bits. Drop this little bomb into the pot and put the lid back on. Before you rub your eyes, wash off your fingers.

Add a bayleaf; a clove of garlic chipped tiny; some oregano, maybe some comino, some black pepper-how much, in what proportions, I can’t exactly say. Keep enough water in the pot to keep the beans from sticking. I put in too much water so I can forget about the thing the six or seven hours it’s cooking, except for an occasional pass-by. You can steam off the water when you get ready or look on the thing as soup.

Use a heavy metal pot, not the conventional clay bean pots from Mexico. There have been news reports of unhealthy consequences, lead poisoning or something like that, from cooking in the Mexican clay pots. After you figure you know how to do it, you can cook two or even four pounds of dry beans at one time and put quarts of the cooked beans in the freezer, but as time passes they lose some flavor.

If you want to make chili beans, about an hour before the beans are done make the chili, and half-way through the chili’s cooking, pour it into the beans.

Knowing they are a good, cheap source of proteins and carbohydrates, pintos expect you to sit up and notice them now and then. You never can tell when you’ll hear from them. Where beats the heart of patriotic Texan who has not, in his or her childhood, relieved the distending fervor of “Beautiful, Beautiful Texas” or “The Eyes of,” etc., by reciting that immortal children’s limerick-

Beans, beans, the wonderful fruit, The more you eat, the more you toot,

The more you toot, the better you feel,

So let’s eat beans for every meal. With practice, you might even get to where you can time these sequels as your means of remark upon the prices during your next visit to the meat market.