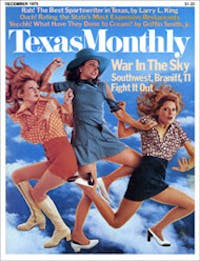 Aristotle Onassis wore them. Bob Hope and Bing Crosby wear them. Con­siderable numbers of the wealthy habitués of Southampton and Palm Springs wear them. Such well-heeled feet give white shoes an aura of luxurious casual­ness, of golf courses, beaches, and boats, of suntanned and pampered bodies. Since this is the highest plateau white shoes attain, I assume this is the plateau that all the rest of the men who wear white shoes are trying to achieve. But the shoe has become so common with a certain class of men that, instead of retaining the air of luxury, it has taken on very unluxurious associations. It is the worka­day shoe of chain store managers, real estate salesmen, Baptist preachers, and the Saturday shoe of the suburban coun­try club set and of Gerald Ford, Presi­dent of the United States. It is, in short, the badge of the middle-class male.

For the past three years the white, moc toe, patent leather slip-on has been the most popular men’s style on the market. Industry journals have predicted a decline in popularity in the near fu­ture, but manufacturers haven’t noticed any lessening of interest and even as you read this they are producing thousands and thousands of pairs for spring, from the $17.99 Thom McAn to the $69 Gucci.

Men in the shoe business are surpris­ingly blase about the shoe and, to me at least, surprisingly uninformed. The present slip-on design originated in Italy—no one in the industry seems to know exactly who was responsible or when it happened—and was copied by Ameri­can manufacturers. They produced a line of patent leather slip-ons in basic colors, one of which happened to be white. They didn’t think that much about it. Apparently, no one realized that deep in the secret heart of American men lurked the desire to wear white shoes.

In the final analysis it was the tech­nology of plastics rather than the aes­thetics of design that enabled American men to realize that secret dream. In the past patent leathers began to crack after a certain amount of wear and they were, whether white or not, very hard to clean. Today’s patent leathers are lami­nated by passing them under a “flow coater” where a substance called ure­thane falls onto the leather like a water­fall. The urethane coating makes the shoe practically immune to the elements, prevents the leather from cracking, and is easy to clean with soap and a damp cloth. Urethane made it possible for the white patent leather to become an every­day street shoe. And it arrived in the marketplace at the very moment that multitudes of men were ready to accept it.

Shoe styles are determined by cloth­ing styles, not vice versa. During the last ten years, men’s styles have changed considerably, the main changes being the use of synthetic fabrics—polyesters—and the acceptance of a variety of bright colors and patterns not only in shirts but also in suits. These colors—burgundy, coral, green, shades of blue, lavender, and others—were, in polyester suits at least, frequently trimmed with white thread or combined with white in checks or plaids. Even when the suits were solid colors or a combination that did not include white, conventional wisdom decreed that white went with every other color. Very quick­ly white shoes became accepted with any shade or pattern of polyester. A man could buy three suits, or ten suits for that matter, and a thousand pair of slacks—and one pair of shoes to go with them all. He could buy one white belt, too, and solve that sartorial problem the same way. Once the shoe had gained such a secure foothold in the market—this was around 1972—it never lost it. The trend toward more casual dress on occasions which once demanded coat and tie, the popularity of the leisure suit, the increased use of plaid pants with solid jackets, and, who knows, per­haps the longer, hotter summers which are also melting the polar ice cap, all have combined to maintain the shoe’s popularity.

This popularity persists in spite of the phrase “white shoes, white belt” replac­ing “blue suit, brown shoes” to describe a kind of man whose taste is beyond sal­vation. Still, there is a great difference between the two. Blue suit, brown shoes is a sin of omission, of ignorance, of attempting to follow accepted conven­tion but not knowing how. White shoes are a sin of commission, of choosing that particular style above all others. They are a sin because, worn with any other color but white, white shoes not only make a man’s feet look bigger but also draw attention to the feet rather than to the face or body. “White shoes,” said one prominent fashion edi­tor, “look like highway stripes in mo­tion.” Frank Gifford, ABC television’s sports commentator who is listed as one of the world’s ten best-dressed men, says simply, “They’re terrible.” Why do so many people wear them? “I guess there are just a lot of people with bad taste out there.”

In fact no one likes white shoes ex­cept the people who wear them, and the people who resent white shoes resent them for the very reasons the wearers like them. The shoes are flashy, spiffy, shiny, full of pep, and impossible to ig­nore. Wearing them declares, loudly, al­legiance to a particular class and set of attitudes just as long hair on men did for a different time and for a different set of assumptions. They are the shoes of a man who is inevitably middle class, who believes, not so much that the middle-class standard is the only one, but that it is the best standard among all the available choices. This feeling is running so strong in the United States that now there is a style of dress that is strictly and distinctly middle class. Once, less than ten years ago, moderately priced clothes were simply modest imi­tations of more expensive clothes. To­day, moderately priced clothes have their own patterns, cut, materials, and colors—the leisure suit with matching shirt, double-knit slacks, the shiny poly­ester suit.

White shoes are made to be worn with these clothes. Wearing white shoes, therefore, is a matter of class pride. Two men wearing white shoes can look at each other’s feet and know that, no mat­ter how different they might seem, they share something essential. Even the nabob in white shoes golfing at Palm Beach shares something with the white-shoed appliance dealer in Beaumont—the nabob is living the dealer’s dream.

Look about you. Watch this spring for when the shoes reappear. They are footnotes to something important. Never in recent memory has the middle class had such a visible touchstone. The ure­thane shine on white patent leather is a measure of how strongly that class, on the defensive through the Sixties, is re­asserting itself. Patent power walks the land.