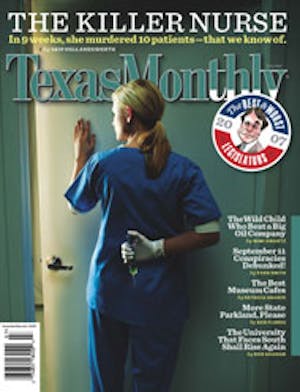 In the sixties, at London’s Ealing Art College, a student named Pete Townshend was introduced by his Alabama-born classmate, Tom Wright, to both mind-altering substances and American rhythm and blues. Townshend went on to lead the Who, while Wright became a photographer, road manager—and sometimes Texas resident. Roadwork: Rock & Roll Turned Inside Out tells the lensman’s adventures in his own words and pictures.

How did you first wind up in Texas? My stepfather was in the Air Force—that’s why I lived in London—and his next assignment was San Antonio. I didn’t follow right away, but in the seventies I began teaching at the Southwest School of Art and Craft. I later wound up in Austin, freelancing as a photographer, and I toured with Elvis Costello, the T-Birds, and the Rolling Stones.

Your work is archived at the University of Texas. Any favorite items? The pictures are like bricks in a wall; I don’t have a favorite brick. I wore my camera as if it were a cross between a gun and a notebook: Things and places flew by at warp speed, and I tried to take visual notes so as not to forget.

You and Pete Townsend were thick as thieves in London when the Who was being birthed. What was it like to reunite forty years later (March 2007 in Austin) to launch your book to the music industry? It wasn’t as though I hadn’t seen Pete for forty years. Last summer I attended a few of the Who’s concerts in Europe and got to visit with him in his studio in London before the tour started. When Pete knew for sure he would be spending time in Austin for SXSW, he suggested that we have a reception that would shed light on my collection at UT as well as announce the arrival of my book.

The book is a document about life with and among various rock and roll characters, such as the Who, Rod Stewart and the Small Faces, Bob Seger, and Joe Walsh. What were your least favorite bits to shoot and what were your most favorite? If I took a picture of someone playing guitar it was because of what they were playing and how they were playing—something I never wanted to forget. I wasn’t looking for pictures, even though the camera was always loaded and ready. I was engaged in life, while in my mind, I was editing pictures of what I was seeing.

Once in a while I was asked to get some shots of the whole group. I would wait until they were actually all together, and then I would stalk them a couple of minutes and shoot a few shots till it felt like I probably had something we could use. Then the camera would fall back to riding my chest in the fire-at-will mode. No one would have skipped a beat.

Some of my pictures are more suitable than others for publication or collectors, but since I took them, all are notes to myself of things I didn’t want to let fly by and forget. In my case, all memories are favorites. Even the bad ones are good.

How do you fill your calendar these days? I am cataloging thousands of negatives while doing phone interviews with classic-rock deejays who want to know who the “unknown alcoholic” [a photo of a musician with a paper bag over his head] is.