Seeing her clean, freckled face for the first time, you might be inclined to lump this budding pop diva in with Britney Spears and all the other teen phenoms currently shimmying up and down the charts. Not so fast. For one thing, the Houston native turned twenty last fall, making her a grizzled veteran by comparison, and both she and her sound have matured, moving away from what she calls her “teenybopper side” in the four years since her album Heavenly Place became the fastest-selling solo debut ever in the contemporary Christian music category. And that is what really sets her apart: The charts Velásquez dominates are the Christian charts, and while the Britney Bunch have had their money-makers shaking from the get-go, Velásquez has made her way by relying on her booming pipes (more Celine than Selena) and by staying on-message with what she considers her primary calling, her musical Christian ministry. “What’s really amazing,” she says, “is people spicing up what they do for sales, when it’s such a great feeling to do what you believe in and have people take hold of it without you having to change it.” Not that her sales have exactly been lagging. Together, Velásquez’s three albums (the others are Jaci Velásquez and Llegar a Ti) have sold more than two million copies worldwide, and she has a string of nine consecutive number one Christian singles. Add in her three Dove Awards, the Christian market’s equivalent of the Grammy, and it’s easy to see why hopes are so high for her next, as-yet-untitled CD, which is due out in September on the contemporary Christian label Word Records. – JOHN SPONG 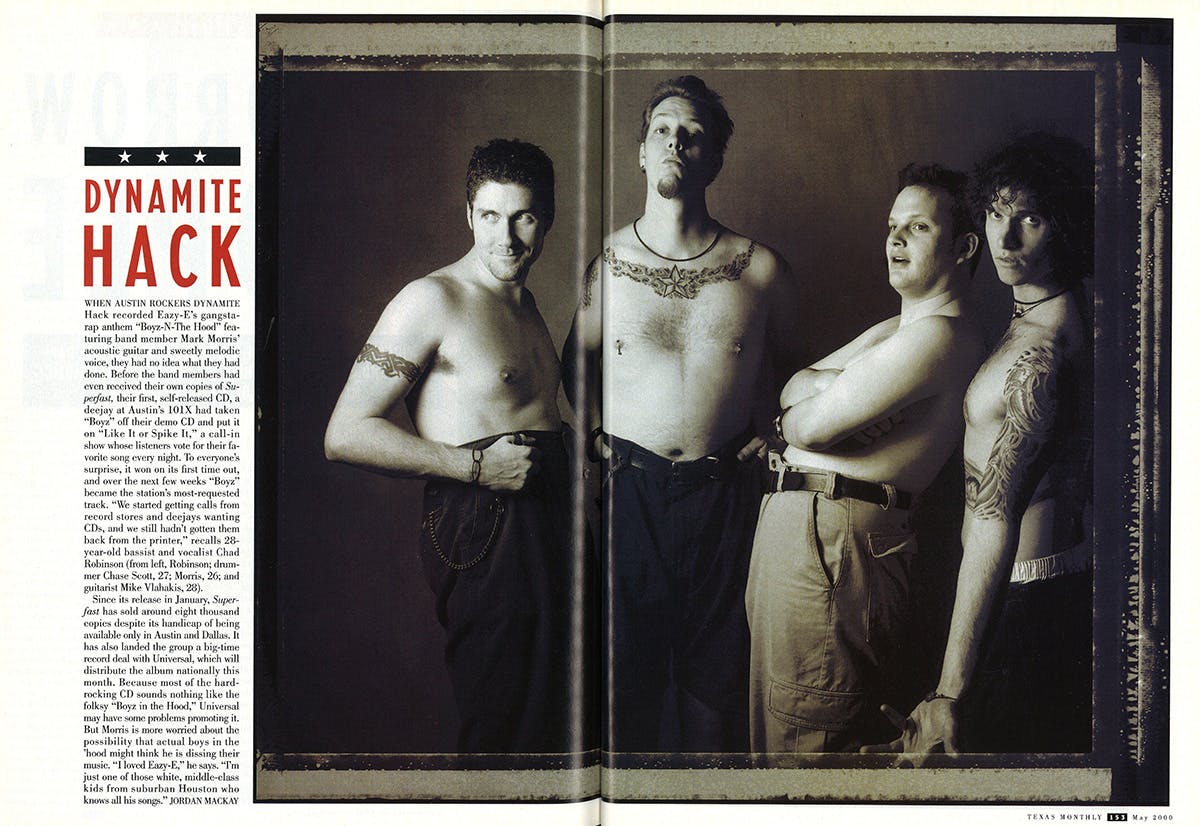 When Austin rockers Dynamite Hack recorded Eazy-E’s gangsta-rap anthem “Boyz-N-The Hood” featuring band member Mark Morris’ acoustic guitar and sweetly melodic voice, they had no idea what they had done. Before the band members had even received their own copies of Superfast, their first, self-released CD, a deejay at Austin’s 101X had taken “Boyz” off their demo CD and put it on “Like It or Spike It,” a call-in show whose listeners vote for their favorite song every night. To everyone’s surprise, it won on its first time out, and over the next few weeks “Boyz” became the station’s most-requested track. “We started getting calls from record stores and deejays wanting CDs, and we still hadn’t gotten them back from the printer,” recalls 28-year-old bassist and vocalist Chad Robinson.

Since its release in January, Superfast has sold around eight thousand copies despite its handicap of being available only in Austin and Dallas. It has also landed the group a big-time record deal with Universal, which will distribute the album nationally this month. Because most of the hard-rocking CD sounds nothing like the folksy “Boyz in the Hood,” Universal may have some problems promoting it. But Morris is more worried about the possibility that actual boys in the ‘hood might think he is dissing their music. “I loved Eazy-E,” he says. “I’m just one of those white, middle-class kids from suburban Houston who knows all his songs.” – JORDAN MACKAY 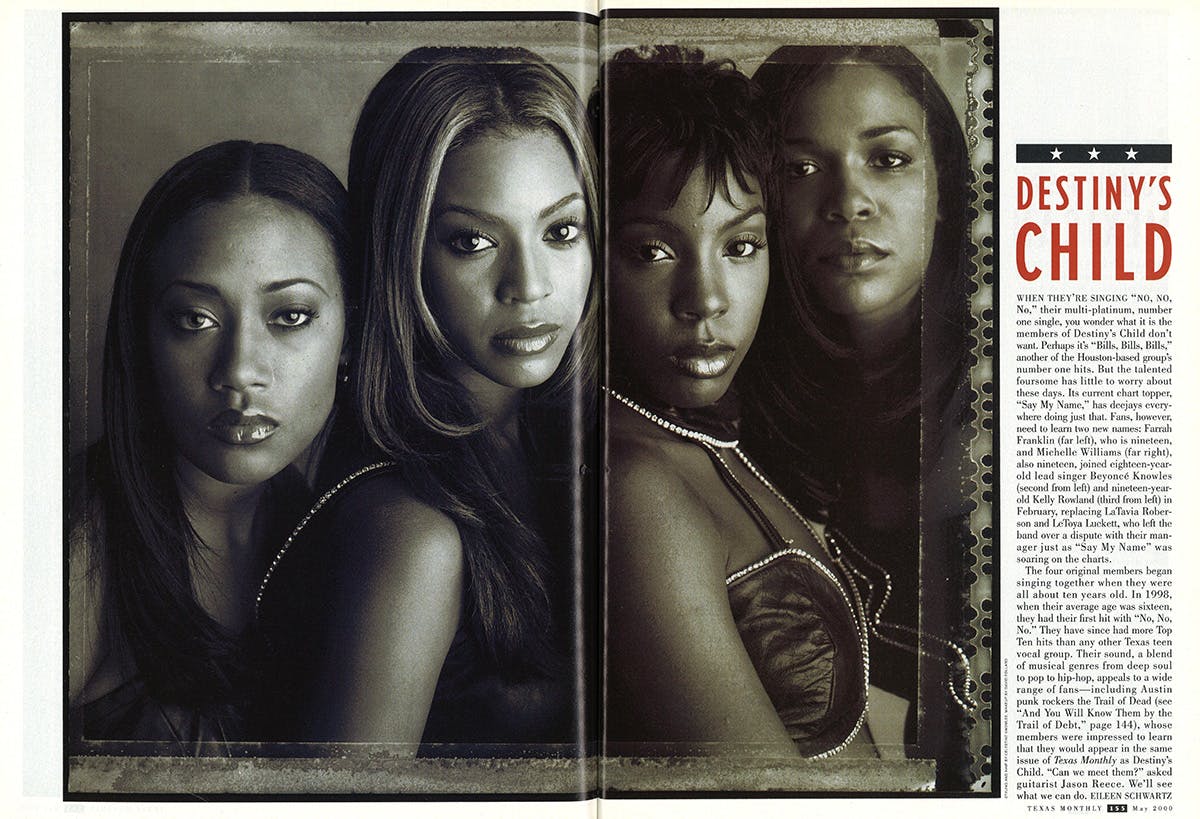 When they’re singing “no, no, No,” their multi-platinum, number one single, you wonder what it is the members of Destiny’s Child don’t want. Perhaps it’s “Bills, Bills, Bills,” another of the Houston-based group’s number one hits. But the talented foursome has little to worry about these days. Its current chart topper, “Say My Name,” has deejays everywhere doing just that. Fans, however, need to learn two new names: Farrah Franklin, who is nineteen, and Michelle Williams, also nineteen, joined eighteen-year-old lead singer Beyoncé Knowles and nineteen-year-old Kelly Rowland in February, replacing LaTavia Roberson and LeToya Luckett, who left the band over a dispute with their manager just as “Say My Name” was soaring on the charts.

The four original members began singing together when they were all about ten years old. In 1998, when their average age was sixteen, they had their first hit with “No, No, No.” They have since had more Top Ten hits than any other Texas teen vocal group. Their sound, a blend of musical genres from deep soul to pop to hip-hop, appeals to a wide range of fans — including Austin punk rockers the Trail of Dead whose members were impressed to learn that they would appear in the same issue of Texas Monthly as Destiny’s Child. “Can we meet them?” asked guitarist Jason Reece. We’ll see what we can do. – EILEEN SCHWARTZ 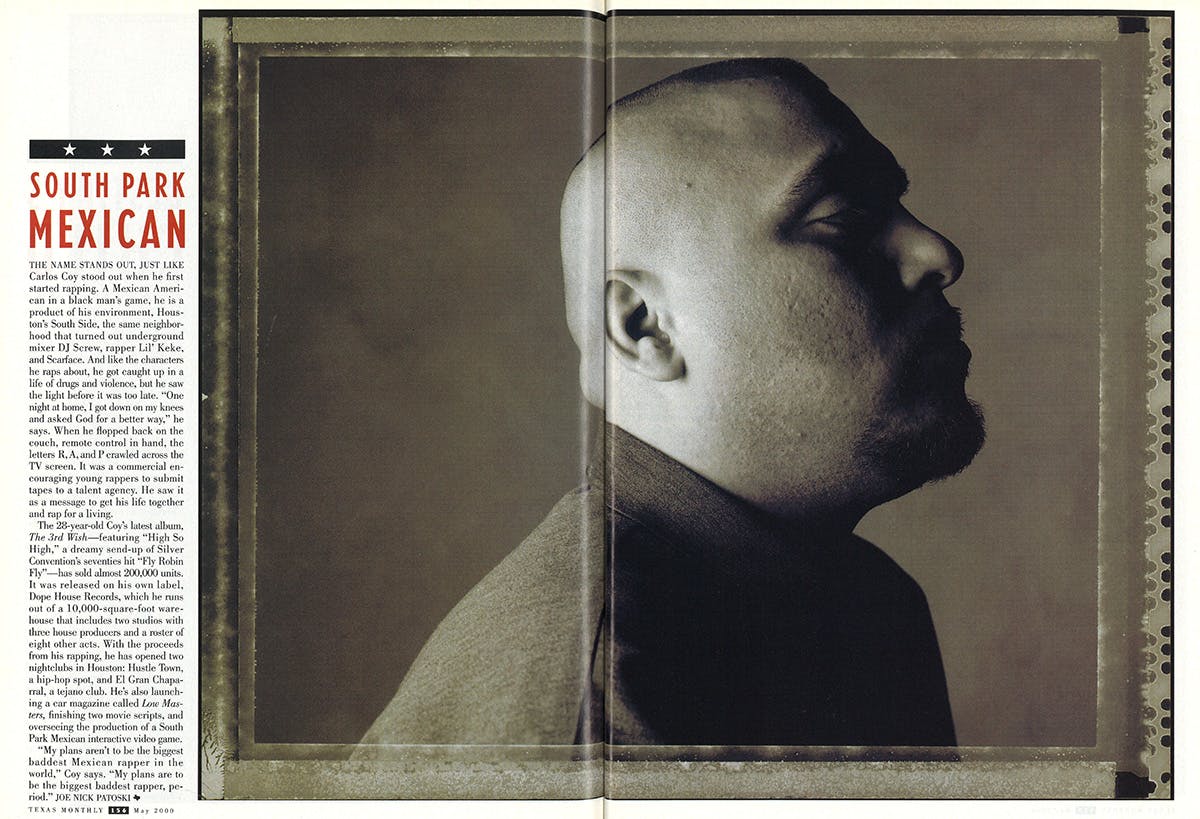 The name stands out, just like Carlos Coy stood out when he first started rapping. A Mexican American in a black man’s game, he is a product of his environment, Houston’s South Side, the same neighborhood that turned out underground mixer DJ Screw, rapper Lil’ Keke, and Scarface. And like the characters he raps about, he got caught up in a life of drugs and violence, but he saw the light before it was too late. “One night at home, I got down on my knees and asked God for a better way,” he says. When he flopped back on the couch, remote control in hand, the letters R, A, and P crawled across the TV screen. It was a commercial encouraging young rappers to submit tapes to a talent agency. He saw it as a message to get his life together and rap for a living.

The 28-year-old Coy’s latest album, The 3rd Wish — featuring “High So High,” a dreamy send-up of Silver Convention’s seventies hit “Fly Robin Fly” — has sold almost 200,000 units. It was released on his own label, Dope House Records, which he runs out of a 10,000-square-foot warehouse that includes two studios with three house producers and a roster of eight other acts. With the proceeds from his rapping, he has opened two nightclubs in Houston: Hustle Town, a hip-hop spot, and El Gran Chaparral, a tejano club. He’s also launching a car magazine called Low Masters, finishing two movie scripts, and overseeing the production of a South Park Mexican interactive video game.