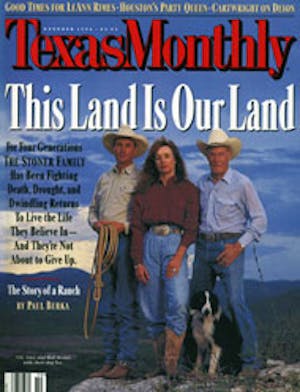 At what point should we wash our hands of a troublemaking kid? That question has been on my mind since I reported on the six Silsbee youths who had beaten a horse to death (“The Horse Killers,” March 1996). A number of readers expressed outrage that the offenders, aged ten to fourteen, had received less than one-year sentences to juvenile facilities. “As sure as the sun rises,” one reader predicted, “we will hear from these perpetrators in the future as they are charged with other crimes.”

Gone are the days—though indeed they once existed—when we might have been inclined to view the Silsbee incident as a brutal but ultimately childish prank. Juvenile offenses in Texas increased 89 percent from 1988 to 1994, with violent crimes jumping 178 percent over the same period. In 1995 there were 100,179 referrals to juvenile authorities for delinquent offenses in Texas; 28,536 of these were felonies, and 8,500 were violent felonies. George W. Bush rode to victory in 1994 with juvenile justice reform as one of his four campaign platforms. The governor has made good on his promise to get tough on bad kids. As of this year, more children than ever before are being “certified” (tried as adults), while uncertified youths are eligible for sentences as lengthy as forty years. Texas can now send a fourteen-year-old murderer to prison for life or incarcerate a teenage rapist until he is in his mid-fifties. Perhaps most significantly, the Texas Youth Commission (TYC) juvenile correctional facilities, once little more than holiday camps, are now tough and demanding institutions, and the TYC has the statutory authority to hold any of its wards—no matter how short their minimum sentences or how minor their offenses—until their twenty-first birthday.

Because both the public and its elected officials are bent on making Texas a delinquent-unfriendly state, I was fully prepared to see signs of harsh retribution throughout my recent weeklong tour of eight TYC facilities. After all, these institutions house the state’s 2,400 worst juvenile offenders. The kids I saw had alienated their parents, their schools, their communities, and finally their local probation authorities; they represented the 2 percent of all juvenile referrals for whom there seemed no solution other than to lock them up. The Silsbee horse killers (all of whom have returned home) were model citizens compared with the murderers, arsonists, kidnappers, and rapists I met. In fact, at one facility I visited, a few boys burst out laughing when I told them that some people had actually gotten upset at kids for killing a horse.

Accompanying me on portions of my tour was the commission’s executive director, Steve Robinson, a six-foot-eight country boy who likes to say, “I’m not a social worker, I’m a corrections person.” (Coincidentally, his college roommate at Sam Houston State University was Andy Collins, the recently departed chief of the Texas Department of Criminal Justice.) Until Robinson took over the TYC in December 1993, the agency believed that its role was to nurture rather than punish. That governing philosophy may have been appropriate for the truants and runaways that the TYC historically housed, but it became a dangerously outdated approach to the offenders of the nineties, who, as one TYC veteran put it, “are criminal in their thinking, with no respect for authority and no empathy whatsoever for their victims.” To these young toughs, the TYC was a joke. They showed up at the facilities toting stereos and suitcases full of clothes. They wore jewelry and gang colors and took swings at the staffers. Then they returned to the streets, as ignorant and vicious as before.

Robinson aimed to change all that. “I was trained in the TYC way, which was to love kids,” he told me, “but our agency has got to be the ultimate hammer for kids who’ve been shooting the bird at the system—and a hammer made of lightweight rubber won’t do the trick. When a judge commits a kid to the TYC, I don’t want that kid to say, ‘So what?’ I want him to say, ‘Oh, shit.’”

Here are a few Robinsonian touches. Today, the new “residents” (as TYC inmates are termed) arrive in arm and leg restraints at the gates of the Orientation and Assessment Center in Marlin, an intentionally dismal-looking former Texas Department of Criminal Justice (TDCJ) prison. They are led into a white concrete room, where they are ordered to strip and hand over their personal effects, given a pair of gym shorts, and as Robinson puts it, “told, in effect, ‘You are in serious trouble.’” Then they are taken to a shower room, where they are deloused. The boys are given crew cuts. Every waking minute of their day is thereafter accounted for, including three minutes of shower time and twenty minutes for each of the three meals. (The food is prepared by inmates from a nearby adult prison, which might explain the sprinklings of pebbles, fingernails, and bugs the Marlin residents claim to encounter in their grub.) After a minimum 45-day stay, the residents are transferred to the appropriate facility—capital murderers to the unit at Giddings, females to Bronte, emotionally disturbed offenders to Corsicana, and so on. The juveniles in the TYC’s care live a militarized life: intensely structured sixteen-hour days, uniforms, single-file movements, and privileges that are both hard earned and easily revoked. Those who don’t take to the program are treated to seven-day stays in tiny, desolate security cells. “The message throughout,” says Robinson, “is that eligibility for release is entirely based on changing your behavior.”

And yet the TYC’s methods for changing behavior are not mean-spirited. Tear away its stern trappings and what you find is an agency that regards almost all of its young crooks as salvageable—an attitude as manifestly optimistic as the adult prison system’s mind-set is pervasively cynical. Undeterred by a public that would just as soon see its juvenile offenders busting rocks, Steve Robinson’s TYC has heroically set out to make good kids out of bad.

I arrived at the TYC’s boot camp in Sheffield expecting to see kids being hollered at, humiliated, and roughed up by sadistic Marines. “What good would that do?” Chip Harrison, the boot camp’s commandant, said with a laugh when I brought up the matter. “These kids have been hollered at all their lives. They’ve had semiautomatics shoved in their faces. They’ve been stabbed. You think a little yelling is gonna change them?” What the kids needed, Harrison told me as we watched a platoon perform a series of elaborate marching drills, was strict discipline but also positive motivation. “These kids are used to failing,” he said. “Here, we don’t let them fail. We stay on them until they get it right. They’re not going anywhere until they do.”

By way of illustration, Harrison introduced me to a poorly schooled kid who had arrived in Sheffield so messed up from “huffing” (inhaling aerosols and gasoline fumes) that he could barely write his name—but who, through intensive tutoring, moved up two grade levels in a year. He introduced me to a boy whose hostile streak seemed to melt away after he lost forty pounds of blubber running the boot camp’s obstacle course. He introduced me to a seventeen-year-old ex-thug who had become a gunman for the Crips at age eight but now was working on a general equivalency diploma (GED) and had earned Harrison’s praise as “a true star of this program.”

Saving the best for last, Harrison pointed to a tall black kid slouching sullenly at his desk in a classroom. “That one has got an attitude out of this world,” the commandant told me. “His dad is in prison, his mom is on drugs, and he thinks he’s a victim. He’s the most violent kid we’ve got—he just got here for aggravated assault, and already he has attacked three kids. He wants out bad. But,” Harrison added with a broad grin, “we’ve got plans for him. He’s why we get paid. He has actually got great leadership potential. I think he’s going to be one of our best.”

I saw unlikely reclamation projects all over the state. Many of them were kids who showed up at Marlin not knowing how to brush their teeth or comb their hair, much less say “yes, sir” or “I’m sorry.” Now they made their beds to military specifications, folded their clothes, yes-sirred visitors to death, and freely accounted for their criminal conduct in 45-minute monologues called lay-outs. Kids who had been thrown out of every school in the state were now acquiring their GEDs and designing their résumés on computers. For what it’s worth, I also saw kids whom TYC officials deem incorrigible—including a murderer named Edwin, who has stabbed caseworkers with the screws from his cell lamp and scrawled death threats on his cell walls with his own feces. “He can’t be fixed,” a TYC official said of Edwin, by way of also acknowledging that Robinson’s staffers aren’t miracle workers, that some crooks are born and not made.

But two questions are begged: Once made, can a young criminal be unmade? And even if he can be rehabilitated, does he deserve a second chance? The first matter, of course, has long preoccupied criminologists. Historically, 57 percent of the TYC’s former residents are rearrested for a new offense within a year of release. That statistic was calculated before Steve Robinson began toughening up the TYC, but even Robinson concedes that it’s not enough to lock up delinquents for a few years and then return them to the environment that shaped their criminal behavior. “The best solution is preemptive,” says Dinah Dinwiddie, the executive manager of Justice and Public Safety in Travis County. “So much literature indicates that you can identify the troubled kids in their very early years. That’s why it makes sense to put prevention services like pre-natal care, education, and school intervention programs in targeted neighborhoods—or, in some situations, to remove kids early from an adverse environment.”

Still, for those offenders who inevitably fall to the TYC’s care, Robinson’s correctional approach is sensible. The results I witnessed aren’t empirical and don’t come with a permanent guarantee, but they’re persuasive. That said, we come to the second question: Do these kids deserve our expensive efforts to rehabilitate them? I know many decent, reasonable people who think that it’s time we quit regarding juvenile offenders as children and instead view them as proven menaces to society. Elected officials are listening. Recently, Republican congressmen have made noise about repealing the federal mandates that prevent states from confining juveniles and adults in the same facilities. And as of this year, Texas courts can now send fourteen-year-olds to TDCJ prisons. The new state law that makes this possible is worded to apply only to capital and first-degree felony offenses, but words can always be changed. So can numbers: As recently as 1917, the state could imprison nine-year-olds for life.

I don’t think 1917 is where we want to be, however. Every civilized society draws sharp distinctions between children and adults and passes law after law (most recently, curfew ordinances) protecting the former’s frailties from the latter’s corrupting influences. The recent wave of violent juvenile crime is only further proof that children are what we make them. The overwhelming majority of today’s juvenile delinquents are Hispanic or black children raised in low-income inner-city homes by single working parents. Left to fend for themselves, they gravitate to the streets, where they find gangs, drugs, and guns.