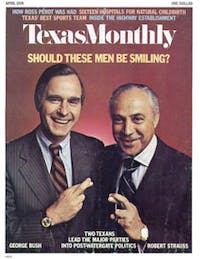 Bill Peyton’s antiques, ranging from the most elaborate Louis XIV or Napoleonic pieces to funky wine presses, Coca-Cola mirrors, church pulpits, and pump organs, come from all over Europe in 40-foot containers, or from estates in Texas, Oklahoma, and Louisiana. For 15 years he has been selling them in Houston, first from his retail store, Peyton Place Antiques (819 Lovett Blvd.), and then at auction from the gallery he built behind the store. He has become one of the major suppliers of antiques to Houston area dealers, and has just expanded his operation to Dallas, where he now holds four auctions a month.

The antiques are always on display at his Dallas gallery the day before the auction, and are sold “as is” from the stand, with Peyton and his young assistant. Carroll Lagle, being careful to point out any flaws.

Prices seldom skyrocket, and many “great deals” are made as the 200 or so dealers and laymen compete for their favorite items. Peyton is a soft-spoken auctioneer whose gentle Louisiana accent is part of the quiet skill with which he sometimes runs through 100 items an hour. “Once, twice—fair warning—Sold!” and even if he has missed hearing a higher bid, that’s final.

Romanticism and reality have no quarrel in the new 214-page illustrated history of Fort Worth. How Fort Worth Became The Texasmost City calls all to whom “the westering experience” has any lure. In 1973, Ronnie C. Tyler, curator of history at the Amon Carter Museum, put together a photographic exhibition for the museum, which was a pictorial history of Fort Worth. He saw an irresistible story and suggested to Leonard Sanders, editor and author, that they collaborate on a book. Sanders says: “He was going to write captions and I was going to write the introduction—but as we got into it we knew we couldn’t stop there. What started out as an introduction turned into 35,000 words.”

Perhaps because of Sanders’ stated purpose (“The text of this book is not intended as a definitive history … it focuses on the more significant and colorful events in the hope of analyzing the processes that have evolved Fort Worth’s individuality as ‘the most Texan of Texas cities.'”), the city history reads like a novel. Events and characters come alive through both the text and the exceptional photographs at the end of each of the five sections.

“I can’t prove it,” said Sanders, “but cities have personalities as well as people. The personality is born of experience and of a group psychology at work over a period of time.”

Relaxed and unassuming with great underlying strength is the personality Sanders attributes to Fort Worth.

During weekdays, the children are third-graders from Corpus schools, and groups like Scouts and Youth City, but on the weekend all may take part. The children are to be brought to the museum and given a “creative art experience,” i.e., instructions in making works of art out of scrap materials. More than 500 volunteers have assisted in putting together the program.

Sponsored by such disparate community elements as the City of Corpus Christi, the Junior League of Corpus Christi, the Art Museum of South Texas, Hadassah and Burger Chef, the program may prove a bigger lesson for adults than for the children. After taking Sally to the Museum to see her working with trash, how can Mama say: “Put that nasty stuff down—you’re just getting dirty”?

PARTS FOR OUR SAKE

For all you Houston beer drinkers who have been tossing your empties in the corner, here’s your chance to clean up—both ways!

Celebrate Recycle Day on April 20 by turning in aluminum, paper and glass at one of five major shopping centers—and make sponsor, the Citizens’ Environmental Coalition, happy. Cash and merchandise prizes (including bicycles) will be given for top quantity donations and participants will also get a chance at hourly drawings for hamburgers, peaches, As- troworld passes, and the like.

Nancy Ryan, executive director of CEC, says Houston has had the lowest involvement in recycling of any major city in the United States. The CEC hopes to change that. If Recycle Day is a success it will be repeated. The CEC long-range goal: to show the people of Houston in general and city government in particular that recycling of waste materials not only is feasible logistically but pays off economically.

THE PLAY’S THE THING

Stage-struck? Strike back at the third session of classes at Innerspace Workshop in Austin. Experienced actors sign up here at the Center Stage to sharpen their abilities; and novices can get a taste of real theater. Teachers with international repute offer five weeks of instruction in such specialties as dance, stage movement, makeup, acting improvement, auditioning and rehearsal tips, costume design, and young people’s theater.

Notable tutors include Powell Shepherd, now of The University of Texas Drama Department, who recently won accolades for his direction of “Faustus.” His credits are vast—two years of professional dancing in Berlin, international television appearances, and teaching positions in renowned universities. Even the totally unskilled are invited to join his dance, choreography and stage movement classes at the nominal charge of $20 for 10 hours.

A new offering is Janice Powell’s all-encompassing course for junior and senior high school students at $25 for 15 hours. Barbara Bailey’s costume design course invites local seamstresses to let their imaginations go. Karen Reicher, with wide experience in touring companies and working theater, does an .insightful session on acting that includes tips on how to break into theater—and for $30 for 20 hours, how can you stay away? The makeup class Karen teaches is decorating magic and only $20 for 18 hours.

Classes all begin on or about April 15. Call for information.

It’s not every day you get to attend a Hollywood Movie Premiere, meet a famous New York designer, see an exclusive fashion show and benefit a worthy cause. Do all four on April 3 when the benefit premiere showing of Warner Brothers’ new movie “Mame” comes to Houston. Sakowitz will stage a fashion show of the exclusive Trevira(R) collection designed by Leo Narducci, who will appear in person. Ifs all for Theatre Under The Stars. There will be door prizes, other good stuff and, of course, the movie.

The lowly strawberry. “Doubtless God could have made a better berry,” said the seventeenth-century English doctor, William Butler, “but doubtless God never did.”

The worthy doctor certainly had in mind the succulent, fresh-picked harbinger of Spring, not the pulpy, flavorless monster berries shipped into markets year-round from subtropical truck gardens. Texans who want to pick their own berries can do so this year at the 26th Annual Strawberry Festival in the town of Poteet, 25 miles south of San Antonio.

More than 60,000 people are expected to converge on this self-styled Strawberry Capital of Texas for a two-day celebration that includes a parade (Saturday morning at 10), a fiddlers’ contest, plane rides. a strawberry auction, and meals of barbecue, chicken, Mexican food, and strawberry shortcake. Forty acres (down from 500-1000 in the past) will be set aside for berry pickers; bring your own bucket or buy one from a strawberry farmer. Each farmer charges around market price for his berries.