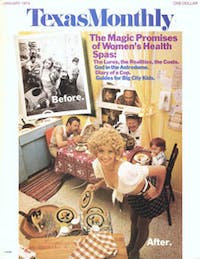 Since its establishment in Dallas 6 years ago, the Janie C. Lee Gallery has been known for showing the most celebrated of contemporary American artists. In mid-December, they opened a Houston branch that promises more of the same.

The initial show is a group exhibition which includes most of the gallery’s big names: Claes Oldenburg, Morris Louis, Jasper Johns, Helen Frankenthaler, Hans Hoffman, Dan Flavin, Ellsworth Kelly, and Donald Judd, among others. It will continue until January 26.

Coming are one-man shows by Frank Stella (his first major show in Houston-Jan. 26-March I) and Kenneth Noland.

A Touch of Class

The Dallas Social Directory brings relief at last for those of you who yearn for a bold look at amazing, previously suppressed facts about thousands from Dallas’ high society. The guide contains a compendium of upper class minutiae. Maiden names, fraternities, social clubs—all are revealed; there is even a provocative peek-a-boo into the lives of those outta-sight guys and gals who give you the ldlewild Ball every year. Hurry if you want your new and savagely revised 1974 version.

Blitz Chess is a variation of the game whose ball Bobby Fischer started re-rolling in America. It uses 48 more squares than regular chess, two additional kings and queens, four additional knights, bishops, and rooks, and eight additional pawns. But don’t despair. If you already know how chess pieces move, learning Blitz Chess takes about five minutes. It’s a full-throttle, wide open game which can be played by two, three, or four people.

One particular advantage is that a novice stands a somewhat better chance against an accomplished chess player than he would at regular chess. The game can also be prescribed for couples weary of bridge.

Charlie Chaplin is supposed to be one of the century’s greatest comedians. We all know that, but the truth is that most of us know it only because others have said so. There’s a chance to find out for yourself in San Antonio during the next three months.

Trinity University will be showing 14 of Chaplin’s films, many of which have never been seen in San Antonio or other Texas cities before. Each film will be shown four times, on Saturdays at 7 and 9: 15 and Sundays at 2 and 7.

For the Burger That Has Everything

The old-fashioned hamburger of the days pre-“What-a-Griff-Mac-King, etc.” is not dead…it’s hiding in the back of a Fort Worth neighborhood grocery store.

Kincaid Grocery prepares to your specifications freshly ground beef burgers that are so good they are often eaten on the way out of the store.

Their grocery business seems only secondary to their hot meals and Post Office business (a sub-station is located within the store). The outstanding meat market is one of the few remaining cut-to-order shops.

On with the Wind

If you are old enough to remember how things were before the Rural Electrification Administration brought power to the boondocks, back before dishwashers and TV sets and electric toothbrushes and airconditioning, then you might remember farm houses powered by wind-driven generators. The generators were connected to storage batteries, and in a fairly aver-age windy setting could generate enough power to light a house.

While that is a long way from running the average suburban house, it’s a step in the right direction. It can be used very effectively in isolated areas, or, if you are paranoid about the energy crisis, can keep your house lit when everyone else is in the dark.

Augie Meyers has long played organ for the Sir Douglas Quintet, a group of San Antonio musicians known for their amazing, high-spirited mixture of impossibly diverse musical styles: rock, country, jazz, Mexican, blues, even German. You Ain’t Rollin’ Your Roll Rite is Augie’s first record on his own, though he received considerable help from friends, wife, and a few kids, as well as some musicians.

The result is an unpretentious, low-keyed, inviting album blending a number of Augie’s own compositions—including the mellow “Wheatchek Waltz”—with the C & W chestnut “Heartaches By the Number,” Jimmy Rodgers’ “California Blues,” and “Dylan’s “She Belongs to Me,” all sung in Augie’s effortless, friendly, funk-inspired style.